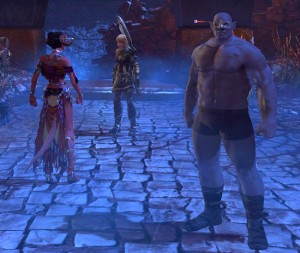 Of course, some people just go without pants…

In real life, I wear jeans, sneakers and comfortable shirts. I’ve talked before about how I’m not really a girly girl, but I’m also not completely immune to style considerations. While my wardrobe in ‘meatspace’ is pretty limited (though I do go for colorful and hopefully flattering shirts), in the digital world, I’m ALL about making my characters look good. After all, if your toon doesn’t look awesome, how can they possibly BE awesome?

Video games obviously bring out a certain level of fashionista in me. I have an artistic background, so the games that attract me are the ones I find aesthetically pleasing. It follows that I want my characters to look good. Don’t get me wrong; I’m not all about the looks since I do put in a good amount of time trying to be a good player. I like being a virtual badass, but I also want a character that looks the part.

EverQuest, which I played for several years, didn’t offer much for character customization in the beginning. You had the choice of a few different faces/heads, but that was pretty much it. Armor and weapons were usually of limited designs and colors. About halfway through my time with that game, they upgraded the graphics and offered additional cosmetic choices, including the ability to switch hair styles. Still, the gear generally all looked the same depending on which class you were playing. When dye was introduced, things exploded with people coloring their armor in both cool and completely whackass combinations. I fondly remember Khoren, the flamboyantly pink paladin you could spot in any crowd. 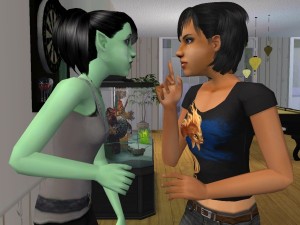 Star and Lou are still plotting ways to make me finish the story.

My next major computer game obsession was the Sims2. Anyone who’s even dabbled with the Sims franchise knows there’s a lot of room for individual expression in how you dress up your characters and their homes. To clarify for the one or two of you that may be unfamiliar, it’s essentially a virtual doll house mixed with a strange little soap opera you have a modicum of control over. One of the awesome aspects of the game (any edition really) is how much custom content is out there made by players for players. Also, while it is not a multiplayer game, there is an incredibly active Simming community out there. Whether you were into creating game mods, custom furniture, new clothing meshes, or even just writing stories using the game as a platform, there is an active forum or community out there for you.

One crucial aspect with custom content, though, was that you had to be judicious in what and how much you added to your game. At least with Sims2, even people with beastly computers could run into major lag and performance issues if their game was trying to load too much custom content. Eventually I got to the point where I had a meticulously organized downloads folder that was kept under 5GB and only contained items that met my very specific requirements. By the time I had reached that point of organization, I had the style I liked for my game down to a tee. I had readers for the stories I wrote that could recognize an anonymous picture I had done just by the look of the sims and the interior decorating of the background. Everything I added had to look like it belonged in the game with the content that came with the game. While some people went for super realistic, I kept to a colorful cartoon style. Regrettably, I never did finish the story, but I’m pretty proud of everything I did accomplish with it.

Nowadays, as you may be aware from previous articles, I’m playing Neverwinter. As a modern MMO, there are tons of ways to customize your character. While the character creation options aren’t the best in the field, they do provide a wide variety of options if you want to take the time to play with the sliders and all the choices. Once in the game, there are multiple armor designs that usually look more and more badass as you level up from 1 to 60. Dye is pretty easy to come by and usually offers some pretty sophisticated ways to recolor your character’s armor. I say usually because occasionally there are dye choices that are less… subtle than others.

I’ve currently got four characters that I’ve played all the way to 60. Two of them are still working on gearing up, but the original two are pretty established in Tier 2 armor and are doing well with the rest of their gear. I’ve worked hard to get them in their respective armor sets and I like how both of them look with the armor designs and dyes I’ve chosen. As I’ve grown into a better player, they’ve grown to look more badass. 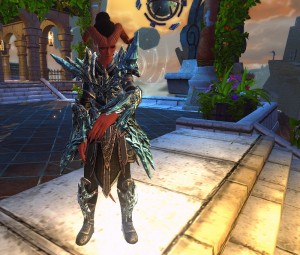 Of course, this brings me to their newest expansion, Icewind Dale, which came out in mid-April. As with most expansions, this one added some new gear and upped the ante on ‘end game’ content. Here’s where my problem lies. The new armor is HIDEOUS.

While some players argue that the benefits of upgrading to the new ‘Black Ice’ gear is negligible, it still is an upgrade of sorts, but I can’t bring myself to wear it. It looks so bad, even if it IS better, I don’t want to wear it. Call me fashion conscious, call me vain, I’ll take it all because it’s probably true. I’m not the only one either. Plenty of players in game have either avoided ‘upgrading’ or wear their fashion outfits when playing.

One option that I have considered is transmuting the ugly gear into something prettier. Transmuting items is probably the ultimate in character customization. With it, you can take a piece of armor (chest, arms, legs, hat, and sometimes neck/cape) and turn it into another piece wearable by your class in that same slot. The big problem is the cost. While there are items in the game that you can use as free transmute options, most cost a significant chunk of in-game change. I can afford it, but I’ve got other items I was hoping to buy with that money. So what’s a girl to do?

While I know some people don’t really care how their characters look, I’m not one of them. Luckily, I know I’m not alone.