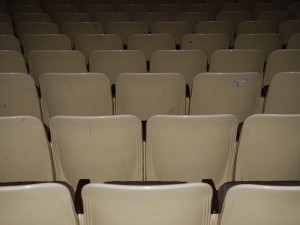 Recently, I attended a small college game convention with some friends from out of town. One of these friends, Brandon Osorio, is the game designer behind Dark Refuge, an independent, self-published game world and system. He is someone who is regularly ASKED by convention organizers to be a guest and run games. As we were leaving my house to head over to the con, he happened to mention that he was anxious with pre-game jitters and that he would feel much better once we got there and his game had actually started.

Consider my mind blown. I nearly tripped over my own feet as I stared at him in shock. Here is this amazing GM with a devoted base of fan boys and girls that eagerly spend entire conventions playing only his games. Yet, he’s standing there talking about how nervous he is. Two things occurred to me in that moment: first was the realization that I wasn’t the only person in the world that feels that gut wrenching rush of panic, and second was that if someone like Brandon feels anxious, then what hope is there for me?

Self-confidence as a GM is something I’ve struggled with since I began to run games. Despite having gamed for a very long time, it’s only been in the last few years that I’ve actually had the courage to run a game. Even when I accept that my players are enjoying the games I’ve run, I still get that twisted feeling inside, worrying about whether or not the game was good enough.

A bit over a month ago, I started running a Firefly/Savage Worlds game for an every other Friday night group. Before the first game night arrived, we had worked out who the characters were and established their reasons for being part of the ship’s crew. I did my research well before the game (re-watching episodes of the show, reading the source book, digging up info on the various planets of the ‘verse) and roughed out some plot ideas for the crew. Game night arrived and when the night was over, the player characters had been introduced with their myriad personality quirks, the newly acquired and filthy ship had been mostly cleaned up as well as saved from awkward revenge targeting the previous crew, and some Alliance purple-bellies had been punched. By the way the players were talking excitedly about their characters and the next game session, I should have felt confident and accomplished.

So why did I have a bit of a panic attack on the way home?

Despite all signs indicating success, I got caught up in worry that I hadn’t done a good enough job. Was there enough action? Did I make sure to give each of the characters something to do? Is the personality conflict between some of the characters too much? Should I have established more rules during character creation? Did I capture the right feel for a Firefly game? What if I don’t know the system’s rules well enough? Did it suck!?

“Did it suck?” is a question that I have actually been asking since the very first game I ran. After running my very first game ever – a Mutants and Masterminds superheroes game – I honestly needed the feedback. Today the question is usually asked tongue-in-cheek and I have come to realize it’s actually a GOOD question to ask both myself and my players.

Anyone who puts themselves out there in front of other people is susceptible to some degree of stage-fright. It’s a much smaller audience for GMs, but even that small handful of players is still looking to the GM to guide their entertainment for the evening. Even when you’ve prepped extensively and made sure you’ve got a good handle on the rules, those faces looking at you expectantly, waiting, can be incredibly intimidating no matter how much experience you have as a GM.

More importantly, that little bit of worry, either before or after a game, is a sign that you truly do care about how your game went. While innate talent may play some role in it, running games is ultimately a skill that is developed through time and experience. Evaluating how any given game went is an important tool in improving those skills. Whether through self-examination or constructive criticism from the players, examining what went right and what went wrong is a key ingredient in learning how to become a better GM. If you figure out what went wrong and why, you can work on avoiding those mistakes in the future. By the same token, when you figure out what went right and why, you’ve got positive reinforcement on what to keep doing.

Anyone who has been playing roleplaying games for any length of time has a GM horror story. Some involve awkward situations or inexperience, but many are about arrogant GMs that do not realize how awful their game is. My personal worst was a fellow that thought he was a top notch GM but never noticed how bored or irritated his players were. He spent more time rolling dice for his NPCs than actively involving the players in the story of his game. The players were a captive audience there to witness the brilliance of his game world. I don’t think he ever once questioned whether or not his game was a good one, even after most of the players had defected to form a group without him. He was too busy bragging about how awesome he was to the next unsuspecting group of gamers.

That example is on the extreme side, but no one wants to be ‘that guy’ when it comes to being a GM. Being a little nervous and worried about how the game is going or went is a completely normal reaction of anyone who wants to do a good job. The key is to not get caught up in that worry and not listen to the players when they’re truthfully saying they honestly enjoyed the game.

Hopefully, even after I can say I’ve been GMing for decades, I will still be asking myself and my players that same question: Did it suck?

11 Responses to Did it Suck?