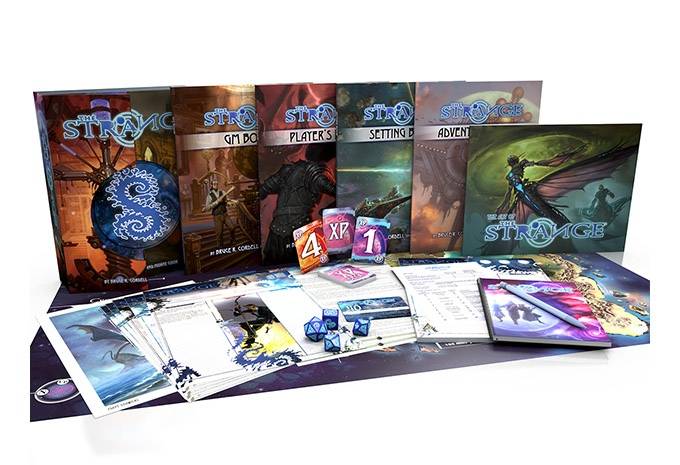 We’ve been working on acquiring different types of content that we think would be interesting to the Gnome Stew audience. Today, we’ve got a guest post by well known author Bruce Cordell of Monte Cook Games, picking apart what goes into making a successful Kickstarter. His current Kickstarter is for a boxed set of The Strange. – Recursive John

At MCG, we’ve run nine Kickstarters. Those include campaigns that launched Numenera, The Strange, No Thank You Evil!, the Cypher System and its various settings, and Invisible Sun. And as I type this, we’re running our tenth: A Strange Box. Lots of things go into designing and running a Kickstarter. Here are just a few principles I’ve picked up by taking point for MCG on A Strange Box. There are many more principles for designing and running a Kickstarter than just these few, but this should give you a good snapshot of how we put together our latest campaign and what has brought us success.

Do The Work Ahead Of Time 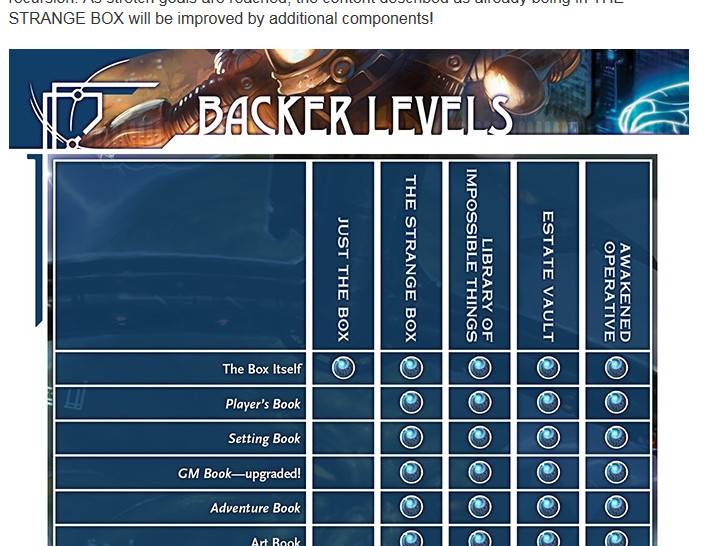 The first principle of Kickstarter design at MCG involves doing as much of the work related to the campaign as we possibly can ahead of time. This means writing the main “story” page of the Kickstarter, the backer levels, and even all the stretch goals. Add to that a first draft of all the updates that will be posted as the Kickstarter funds if all is going well and as each stretch goal is (hopefully) achieved.

By writing all the text early for A Strange Box, we were able to have our editor Dennis Detwiller take a pass at the text to make sure everything looked reasonably good.Â Getting the text in early also allowed our Kickstarter gurus Monte Cook, Shanna Germain, and Charles Ryan a reasonably extensive period to look things over, make suggestions, and allow me time to write “second drafts” of the foregoing material, especially the backer levels and stretch goals, based on that feedback. As a matter of fact, we were also able to discuss the entire package at an in-person summit, which allowed even more refinement.

And of course, you can’t pull graphics out of thin air. Getting everything done well in advance of the start date meant that our Art Director Bear Weiter could begin design on the box itself as well as all the many graphics (and the video!) that helped bring the Kickstarter to life. In a perfect world, we’d have given our coding guru the material he needed to create the pledge calculator we wanted, but even the best-laid plans don’t survive contact with the enemy. On the other hand, having so much done in advance meant that the few outliers that we had to accommodate because of changed plans still managed to get incorporated.

Learn From What Has Come Before

When designing the script of a Kickstarter, it’s worthwhile to look at other successful campaigns to see what they did that proved successful. For us, that means looking at our own past campaigns, but also at the plethora of wildly successful campaigns other people in the industry have run.Â  In the case of A Strange Box, I already had a really great model to draw upon, which was the Numenera Reliquary boxed edition. Despite it’s success, I didn’t want to follow the Reliquary model exactly. For instance, it was clear that offering both a base boxed edition that didn’t grow with stretch goals, as well as a Reliquary box that did get in-box upgrades to content, didn’t get too much uptake, despite how it complicated our offering. So we decided to strike that level from the current Kickstarter.

What was successful before? Do more of that.
On the other hand, an appetite for interesting levels offering an even more deluxe experience was evident from the Invisible Sun campaign, so I wanted to try something similar here. Which is why we created levels that offered deluxe options and versions that would be unique to the Kickstarter, in this case the ESTATE VAULT and AWAKENED OPERATIVE levels. I’m gratified to see that they’ve gotten a lot of attention. In fact, the AWAKENED OPERATIVE level sold out in just 2 days.

Wherever Possible, Keep It Simple

Fulfilling a complicated Kickstarter can be taxing, both in design and in administration. Even though there are a few different levels offered in the box set, you’ll see that each higher level also includes the lower backer level as a baseline, without leaving any holes or exclusions in the offerings that only invite confusions and questions. Offering a lot of additional small items unlocked via stretch goals can quickly grow out of hand, which means that designers can suddenly discover they’re on the hook for writing more discrete products than they realized, or that the 160 page book they thought they were done writing is actually a 198 page book because of a last minute stretch goal that the designer failed to remember. Not that any of this has ever happened to me. Ahem.

That’s not to say that complication should be avoided. Look at the aforementioned Invisible Sun campaign. But complexity isn’t something that should be sought in and of itself, but instead only if it serves a purpose.It basically comes down to this: What was successful before? Do more of that. What was terrible, difficult, and hard to pull off? Don’t do that any more.

Get The Word Out Early And Often

If no one knows we’re running a Kickstarter, it won’t be successful. We usually start letting people know a few weeks before we plan to go live, using our social media and company sites. We continue to reach out after the campaign has gone live, offering news, review, and similar sites interviews, time, or even Design Diary articles as a way to help build awareness and share our methods ;).

Lean On The Team

Like I said at the top, there’s a lot of principles that go into designing and running a Kickstarter. I’m still learning them. We’re about a quarter of the way through A Strange Box as I write this. I’m hoping it goes smoothly and successfully, but if not, that’s more opportunities for us to learn something new. Hopefully this look behind our Kickstarters helps others running their own and provides an interesting look behind the scenes of what goes into making a Kickstarter.

What are your favorite components of a Kickstarter and what makes you back one? What is your preferred level to back one at? What things make you not back a Kickstarter?

An award-winning game designer, Bruce designed The Strange, Gods of the Fall, Into the Outside, and many other titles at MCG. Heâ€™s also worked on Dungeons & Dragons over the course of 4 editions as a writer and developer (including 5E D&D), having written well over 100 D&D products including Gates of Firestorm Peak, Return to the Tomb of Horrors, Expedition to Castle Ravenloft, Gamma World, and the Forgotten Realms Campaign Guide. Heâ€™s also a novel author. His credits include ten novels, mostly set in the popular Forgotten Realms world including the Abolethic trilogy (2008-2010), Sword of the Gods, its sequel Spinner of Lies, and soon to be published Myth of the Maker