Games that use the framework originally established by Apocalypse World have often been praised for their ability to model existing genres, due to the ability of the rules to heavily customize results to the narrative. Because the building blocks of most games that have descended from Apocalypse World are moves, and moves can have dramatically different names, calibrated outcomes, and links to other moves, you can have many games that superficially resemble one another, with dramatically different tones and themes.

Apocalypse World itself, while emulating post-apocalyptic stories, doesn’t lean too heavily on any one recognizable property or sub-genre of post-apocalyptic story, but rather takes some tropes from the genre, while creating its own personality and quirks. In some ways, Descent into Midnight is much more like Apocalypse World in execution than some other descendants of the game. 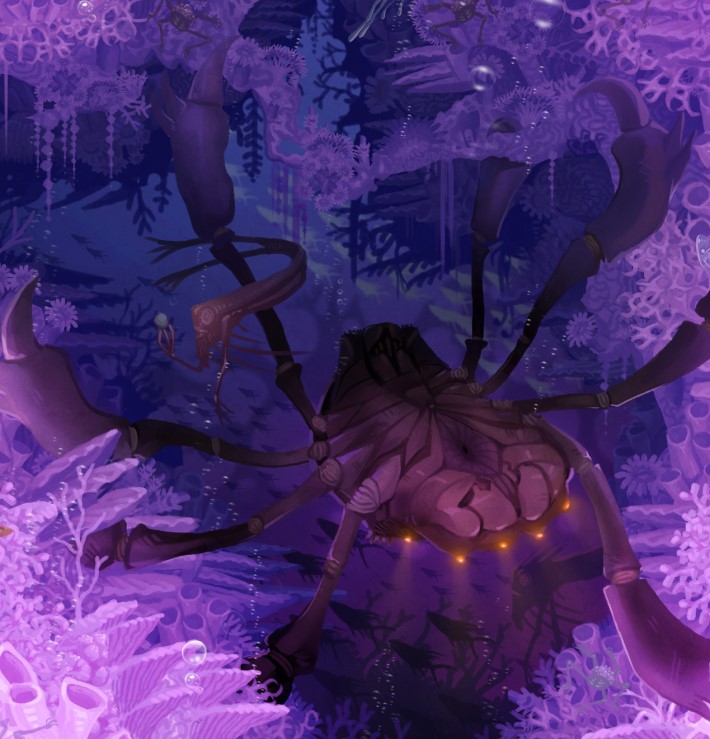 Into the Deep End

Descent into Midnight is a Powered by the Apocalypse game about an undersea civilization. Instead of repeating the structure of stories that deal with lost oceanic cultures or seabed aliens, Descent into Midnight is a game about alien aquatic worlds that do not involve humans, but do involve species with psionic powers and bioengineering technology, fighting for the stability of their community against an encroaching Corruption.

While certain setting elements are assumed to be true across game tables (aquatic environments, no human beings in the world), other aspects of the setting, such as the actual nature and form of the Corruption, are up to the table to decide. Part of the process of playing the game is creating a Community, and asking some questions about how it functions.

There are no set guidelines as to what species populate this community, although there are some suggestions based on various aquatic species given in the beta rules. The playbooks currently included in the playtest packet include the following:

In addition to the individual playbooks used by each player, there is also a community playbook, and players can spend their advancements to add elements to the community as well as their own abilities. 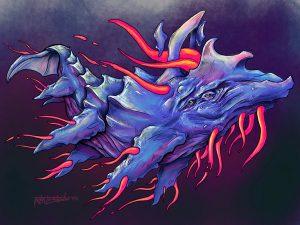 The playtest material stresses that at the heart of this game is a sense of community, contemplation, and awareness of the consequences of actions that are taken. The players take the role of defenders of the community, but it is important to assess what actions must be taken in order to rectify a situation.Â

The stats used in the game are Hope, Altruism, Community, Calm, and Drive, and the names really set the tone for the expected play style. The one move in the game dedicated to doing violence intentionally isn’t based on stats, but on the number of affirmative responses to questions that interrogate the mindset of the character attempting to solve a situation with violence.

Much like Masks, Descent into Midnight doesn’t track harm, but instead tracks conditions that speak to the state that an individual character is in once they have taken actions. One of my favorite things from the playtest document is the move “What Have We Done,” which is triggered when characters stop and think about the actions that they have taken.

On one hand, it struck me as a bit amusing, because I’ve thought about all of the times when I’ve actually said that in an RPG session after things have spiraled out of control, but I am also reminded how often our group moved on rather quickly from that flash of insight back into the core loop of the game, because contemplating the consequences of actions wasn’t a mechanized component of play. I love that it is in these rules.

The Community of Gnomes
There are wonderful leading questions that make every community unique and interesting.

Unfortunately, I haven’t had time to schedule a playtest of the rules myself, so I decided to call in the experts. When I started gathering information to write this first look, I reached out to some of my fellow Gnomes to see what they had to say about their experiences. Here are the answers I received:

What was your favorite part of Descent into Midnight?

Creating our undersea community was awesome! There are wonderful leading questions that make every community unique and interesting. In the game we played on She’s A Super Geek, we ended up with big fish that functioned as public transportation, eel based cell phones, and doctor crabs. These elements all came up in our actual adventure in the best ways.Â

My playtest was quite some time ago, so I’m sure many of the mechanics of the game have been refined and evolved from where they were, but I know the heart of the game then was the character creation. We were encouraged to think beyond being humanoid characters and delve into the beautiful and vast biodiversity of the oceans and seas of our world, or even beyond.Â

Every character created during the game I played was unique and amazing. Mine was an empathic healer named Dellannia, partially looking like a seal, but with octopus-like tentacles for her lower half, allowing for graceful movement and fine manipulation.Â

What makes Descent into Midnight different from other Powered by the Apocalypse games?

This is not completely unique anymore, but it’s not a game about violence. It’s almost more investigatory, and definitely about being local trusted pillars of the community.

I can’t speak to specific mechanics, but I particularly appreciated the emphasis on community problem solving and cooperation among the characters.Â

Review Gnome (Continues to be Me):

Who do you think will most enjoy Descent into Midnight?

Anyone interested in the ocean or playing in different and interesting locations–it’s an extremely unique setting and it makes you think about world-building differently. People who like playing with problem-solving and being community protectors will definitely love this.Â  Fans of PbtA games won’t find anything shocking here, but it clicks along just fine.

This game would be good for anyone who enjoys exploring truly alien cultures but are still founded in an emotional reality. Placing it an aquatic setting already moves it beyond what we are accustomed to in our daily lives, but the game works hard to ground the emotional center of the game in the way the characters interact with their community. Also, there’s the whole PbtA aspect which can encourage people to try genres they may not have otherwise looked at. It’s definitely worth diving into. (HA!)

Coming Up For Air

What I have read of this setting has me very interested to see how the final product develops. There is already a very strong set of tools in place for first sessions, advice on running one shots, lists of potential inciting incidents and events, and even some nice scripts for introducing the setting and the assumed gameplay to a group that may not know what the game is about going into a session.

I particularly appreciated the emphasis on community problem solving and cooperation among the characters.

There is a lot of discussion of safety in the playtest rules, although not a dedicated safety section (not something I’m going to fault the playtest version of rules for, especially when there are so many call-outs to being aware of practicing safety techniques at the table). The only concern I really had is just my own personal hang-ups.

I may not be the target demographic for this game, but it greatly appeals to me. However, both the expansive nature of the ocean, and the potential for aquatic environments to become claustrophobic are called out as key elements of the setting, and as someone that has a fear of being submerged and is claustrophobic, I worry if too much of the key experience is going to be lost on me due to my own personal issues.Â

What I read doesn’t lead me to believe so, and I really want to see more in the finished product about how to evoke the wonder of the deep, as well as any additional inspiration the designers care to cite. 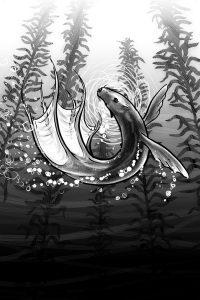 If you have any other questions, please feel free to reach out to the designers at: info@descentintomidnight.com, or on Twitter @DiMRPG. If you are interested in streaming actual play shows, the first stretch goal for the Kickstarter is a streaming show being made by Eric Campbell, producer and Game Master of Callisto 6, Shield of Tomorrow, and Clear Skies, along with QueueTimes Studios in Los Angeles. The Kickstarter launched on February 15th, and is running for 30 days.

Do you have a favorite aquatic setting for RPGs? What is it about an undersea campaign that excites you? How often have you attempted to play a game where you are adopting a truly non-human mindset? We would love to hear from you in the comments below!