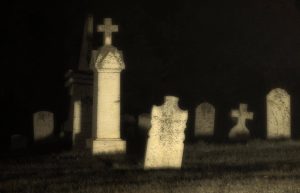 The lost graves of all my original D&D characters…

With the advent of a new edition of D&D there’s been a wave of nostalgia among many of my gaming friends, bringing with it talk of old-school gaming with full-on dungeon crawls and all the risks those days of gaming brought for our characters. For me, it brings up less than fond memories of spending all afternoon creating a character only to have her die at the entrance to a dungeon because the GM grabbed the wrong level module.

Character death is always a bit of a hot topic among gamers. While it’s not quite as common today as it was back in the days of yore, the issue can still bring out vehement opinions on both sides of the argument. One school of thought pushes for ‘realistic’ outcomes to dangerous choices and doesn’t flinch at the idea of a dead character when the roll of the dice turns against the player. Conversely, many modern games emphasize the idea that character death is a rare thing and should never be taken lightly.

I’m not a fan of character death. I’ve always attributed my aversion to my first steps into gaming and the number of characters I burned through in lethal dungeons that took no prisoners and gave no quarter. As much as I fell in love with the hobby, I came to hate putting creative thought and effort into a character only to have them die in one or two sessions for stupid reasons that made no sense in the overall story. Don’t get me wrong, I adored my first GM, but we were teenagers and it was ‘1stÂ Edition’. If the dice turned against you, oh well! Time to make a new character.

With the new D&D spurring talk of the old days, I’ve been reexamining my issues with character death. I always hated the deaths of those many fantasy characters, but in recent years I have had characters die in games where I didn’t have a problem with it. It’s very rare, but I never had an issue with losing a character in a horror game like Dread, or even a full-bore military-esque Shadowrun game. Eventually it struck me that my problem with character death has more to do with the genre of the game than it has to do with actually losing the character. Nobody likes losing a character, but when it fit with the story, I was okay with it.

Different genres have different conventions on how survivable characters are throughout the length of the story and, to me, the best games are always the ones that capture the essence of the genre the game is set in. Awesome horror games have you waking up in the middle of the night clutching the sheets. A rousing supers game will have you leave the table feeling like you can take on the world. Good fantasy games capture that sense of epic adventure that pretty much founded the entire hobby as it tried to emulate ‘Lord of the Rings’. If characters can die for stupid, random reasons, it can kill that sense of verisimilitude you want and need your players to have.

For example, take Boromir. Throughout ‘Fellowship of the Ring’, he fights with the rest of the fellowship but struggles with his attraction to the ring Frodo must carry. During the climax of the book, he dies sacrificing himself so the others have a chance to escape the orc horde that has finally caught up to them. It’s dramatic! It’s gut-wrenching! It’s tragic! It’s EPIC! Conversely, most of my old-school D&D characters died because I rolled a 1 and they tripped over a stupid rock.

As a GM, I rarely make games lethal, but I also tend to run games set in genres where random character deaths would be jarring. Mostly this means epic fantasy, super heroes, or modern supernatural (with a little bit of Doctor Who thrown in). Is this because I don’t like character death or because these are the genres I prefer? It might actually be a bit of both. Even though I don’t enjoy running horror or military style games, I like to think I’d stay true to the tropes of the genre if I did.

Where do your games fall in relation to this topic? Does the lethality line up with the genre, or do you go a different route? I’d love to hear your thoughts.

14 Responses to Death and Genre