One of my initial disappointments with the Fourth Edition’s Player’s Handbook was lack of space devoted to development of a character’s story.

Not their abilities – their individual story.

As a GM, I love when players bring a concept to the table that allows their growth along storylines. Extra feats and class abilities are fine and dandy – but these are basically add-ons to a character’s combat capabilities.

Missing from 4E was space given to a character’s background or profession. Basically, the game asserts “you are your class.” 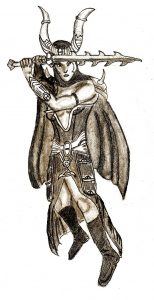 While that works on a meta-level (GM: What are you playing? Player: Oh, a 2nd level warlock), it doesn’t encourage character story development. (GM: What kind of fellow is this warlock you’re playing? What’s his place in the world?)

And more importantly, as a GM, how can I reward a character along those storylines?Â  No mechanism exists to encourage character development in that fashion.

Two years later, D&D creative talents have taken a big swing at filling this gaping hole in their game’s design.

The “Dark Sun Campaign Setting” introduces an optional game mechanic called Character Themes. It takes the setting’s character archetypes and provides mechanical options for your players, including powers and paragon paths specific to the characters calling.

So, in the world of Athas, your character – regardless of race or class – could be an Athasian Minstrel, Dune Trader or Gladiator – just to name a few examples. Each of these themes come with their own characteristics that enhance play.

And as a character levels up, players can elect to use the theme’s progressions in lieu of class abilities. The point being, a player’s character continues to be a mul fighter, thri-kreen rogue or dray warlord, but not at the expense of being a noble adept, primal guardian, templar or wasteland nomad.

What motivated the design team to bring this aspect of character development into the fold at this time?

I can only suppose that it has to do with the fact Dark Sun was born out of the days of Second Edition AD&D’s story-driven sensibilities. By mining this brand from D&D’s past, the things that made the setting special demanded that character development be addressed.

That’s a good thing, especially if D&D develops more character themes as it explores other campaign settings going forward. My only regret is it is too late to apply themes to Forgotten Realms and Eberron – unless it’s addressed by the D&D Insider subscription service.

Even so, the character theme mechanic is a welcome addition to game – a mature marrying of character expectations and campaign setting parameters.