I admit it. I’ve resisted using a mounted whiteboard for my game for a long time.

It’s not that I have anything against dry-erase markers. On the contrary, a dry-erase initiative tracker and a basic Flip-Mat brandÂ  5-foot base map are both fine GMing tools that have a place at my table.

(And yes, I realize, they are just smaller versions of the same thing.)

My resistance to the mounted whiteboard was my fear of falling into the trap of becoming what I can only call for lack of a better term, “a chalkboard professor.” You know the type, the teacher who spends the entire class lecture with his nose facing the chalkboard instead of engaging with his students.

I didn’t want to become that GM, the one who spent the session with his back to the players because he was so engrossed – or by necessity, so devoted to making changes onto – the information on the whiteboard. The fun for me is, in part, seeing theÂ  reactions on the other players’ faces as they cope with the challenges being presented to them. The last thing I want was to be a slave to the whiteboard.

An opportunity of scale 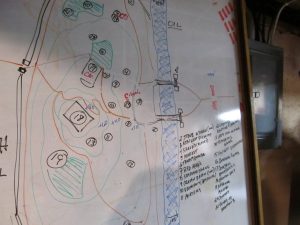 But I recently had two occasions for using a whiteboard for good effect. In both instances – the first was for infiltrating a fortress, and the second, for defending a city – I essentially needed a wall-sized battle map that was grander in scale than anything I could reproduce in 5-foot squares on the table.

In fact, as the PC’s progress in level (we’re at Level 10 +), more and more of the challenges are beyond the scope of what fits neatly into 5-foot tactical maps.

Anyone who GMs using the 3.5/Pathfinder rules will have to confront this reality of scale, eventually. The monsters get bigger, the range of effects of great spells becomes grander and the storylines, hopefully, become more epic. While you can still use tactical maps/miniatures in some situations, the fact is, many situations will demand a greater reliance on narrative play. The GM can either embrace this bigness – and use tools such as the whiteboard to represent encounter areas measured in square miles – or shift the scale of the table battlemaps to correspond. Either is a valid approach.

(I am reminded of a beautiful poster map that came in Dungeon 135 depicting the top of the Spire of Long Shadows, the encounter area for the final battle against the 660 hit point wormgod, Kyuss, to conclude the Age of Worms adventure path. But as I looked at it, the only only thing I could think of was: “There is no way one could contain this final battle to a 100-foot diameter circle. This is world-shaking stuff, and this just isn’t big enough!”)

Of course, as a fellow who loves to build terrain out of plaster and paint, this is a tough admission. I want to provide tactical layouts for the players and their figs. In “Back to the Future,” when Doc Brown apologizes to Marty because his magnificent model layout of Hill Valley’s downtown is neither painted or “to scale,” I have to chuckle, because I can identify. But many of these adventures deserve more than a generic tabletop landscape.Â  A detailed battlemap on whiteboard is a good way to go.

If you think two rooms stocked with monsters in a dungeon is temptation to split the party, how about a whole city? PCs may well scatter to the four corners of the map. Let them. The trick is to run it as a single encounter, holding to the initiative order, even though they are spread out. Just remember to be true to movement rates over great distances. Help takes a long time to arrive if it’s coming from one end of the battle area to the other.

As an organizational tool, different colored markers can be a big help (especially if the party splits).

If your board uses these, I recommend getting some. It beats erasing PC positions if you can just shift them on the board. It also frees the GM from falling into the “chalkboard professor” effect. You move the marker, then turn back to face the table.

Don’t be afraid to mix in your role-play with your rollplay, whether it’s between or during skirmishes.

How the pros do it

It’s worth noting that Pathfinder RPG designer Jason Bulmahn loves his whiteboard, which figures prominently in his Weekly Grind (there are links to his corresponding Facebook page). I recommend checking it out – both for free adventure material from a prominent designer, but also to marvel at his artistic/mapmaking skills.

So, what’s your experience with the whiteboard? Does it fit with your GMing style? Do you have any recommendations for using the whiteboard more effectively?