D&D Beyond is an online service for managing content officially published by Wizards of the Coast for Dungeons and Dragons 5th edition. The service grants access to online character creation, rules references, monster statistics, and, if you purchase the assets, the hardcover adventures that Wizards of the Coast have published up to this point.

I was really on the fence for a long time about D&D Beyond, and buying into the resources. From what I could access in the beta, I wasn’t overly impressed, and I really wanted a functional app that was designed to be used on a phone, instead of just using the mobile setup of the website. Additionally, the initial outlay of funds to get up to speed was high, and while I didn’t think it was unreasonable, the fact that someone that has already been into D&D for years has to play “catch up” made the (reasonable) cost daunting.

While it wasn’t a concern for me, there was also that nagging bit at the back of my brain telling me that the digital plan for D&D, with players potentially buying the same resources for a virtual tabletop, a physical copy, and D&D Beyond was something I couldn’t fully dismiss.

Ultimately, though, curiosity won out. I really do enjoy D&D 5th edition, and I really do want to have easy digital access to the information about the game. I decided to play around a bit more, and if I liked it, I would buy it.

I’m much happier with the interface now than I was previously. It was always a good tool for looking up rules in the SRD, if you didn’t purchase any of the packages, but I like the way the information is organized.

If you own any resources (such as the Player’s Handbook or the Dungeon Master’s Guide), you can access those in multiple ways. You can look up individual chapters, formatted for a web page, in the way they were organized and constructed in the books. There is some content, such as optional rules, that can only be accessed in this manner. In other words, if you want to look up the optional slow healing rules or flanking from the DMG, it’s only going to show up in that resource, but if you search for those things, it will take you to the header on the chapter for the web page that contains that information.

However, any information that is organized into the individual resources is also included in similar format if that information falls under another header. In other words, if you look up spells, all the spells from all the resources you own will show up in the spells section, and likewise with the monsters.

Character creation is another place where this comes up as well. You can look up the individual classes, races, and bits of equipment in the resources where they appear, but when you do the walk through for character creation, all the resources you own will be available at the appropriate tab. If you pick race, and you enable all your resources, you will get a list of every playable race that has been created for 5th edition D&D by WOTC, that appears in the resources you own.

Everything in character creation is covered, and the interface is intuitive, except in a few places. Some options feel a little “tucked away,” and you have to really pay attention to the screen to notice them, such as picking standard equipment or starting gold. Unless I miss my read on the characters I created, languages are a little scattered as well, as you have to look up the individual elements of your character that grant them to find all the languages you might speak.

I will admit, I’m not all that excited about custom content. It’s not that I don’t think there are likely some brilliant people adding new monsters, spells, and items to the game. It’s that calling up a list of homebrew items tells me nothing about how well the person that submitted that item understands the rules.

One of my fears about the custom content has been assuaged a little, although I’m not sure even this process can eliminate what I was worried about completely. My fear is that people could pick up resources from 3rd parties, and those resources could be entered into the homebrew database for free, without any attribution.

This system is only as good as the person on the other side of the screen, but you have moderators that review items submitted to the homebrew section of the site. Just to see the process at work, I added “reckless” to a Frost Giant and called it a Frost Giant Berserker. It’s something I did in my home game of Storm King’s Thunder just to have some variety in giants.

After about a week, I got back a response rejecting my monster, saying it was too similar to the base monster in the monster manual. I’m not upset by this in the least–I just wanted to see how long the process took, and how deliberate it seems. I don’t know how many submissions they get on a regular basis, but I’m actually happy that it wasn’t a quick turnaround.

You don’t have to submit your homebrew content to the site itself. You can make it so that you have access to your custom creations, for reference at the table (which is what my main interest would be anyway). So, if you just want your stat-blocks of humanoid creatures with different weapons than what they have in the Monster Manual, you can do that.

You can enter all the various fields, and the result will be something that looks like the formatting used for spells, items, or monsters on the website. For a quick start, you can “clone” an existing monster and make modifications, however, it looks like this option is only available for items that appear in the SRD or the Basic Rules. 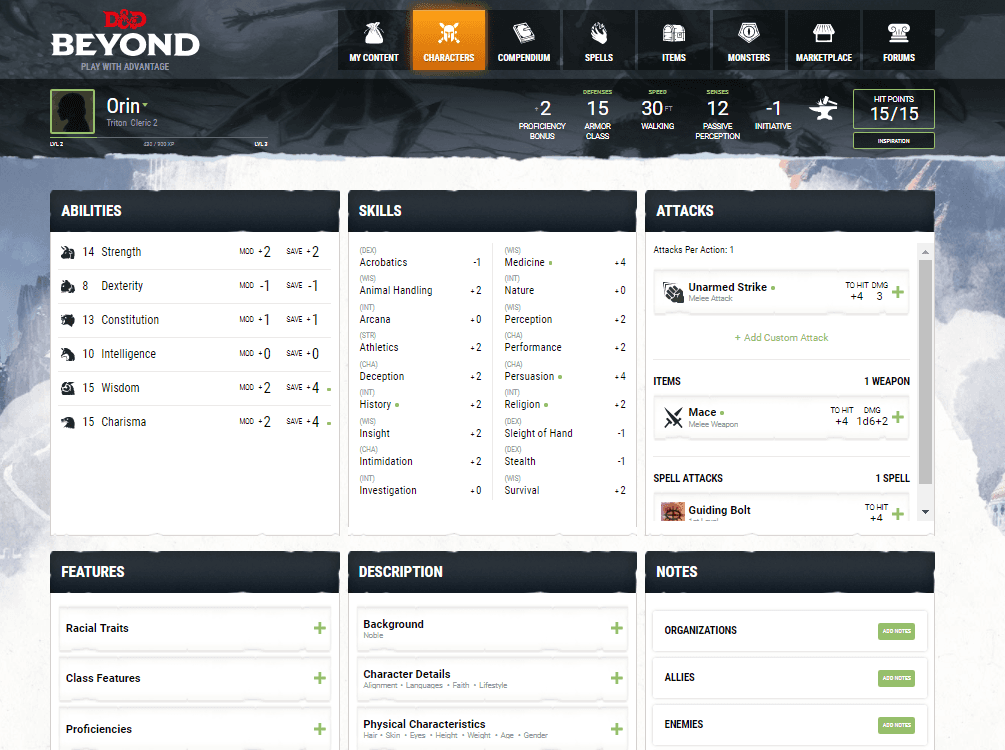 The final bit where I made the site jump through my hoops was taking a character to Adventurer’s League and running the character completely from my phone. I received my DM’s permission for this one–don’t assume your DM will allow this, because nobody says they must do so.

Given that I was running this from my data plan, through a website and not a native app, the mobile formatted pages seemed to work well. It did strike me that there is not native support for Adventurer’s League on the site. While I understand that the AL is managed by a separate entity, it’s still the official organized play for the game, so I’m curious to see if this changes in the future. In case you don’t want to run your character in real time, you can export any character you made as a PDF, which formats your choices into a character sheet that resembles the official character sheets available from Wizards of the Coast.

A service that provides value through a website is obviously something that can change and grow over time, so I thought it was worthwhile to think about what I’d like to see in the future.

Largely well organized, functional customization, character creation real time tracking, and easy look up of resources owned all work well. The site itself is responsive, and after some heavy use, I haven’t run into many hiccups in service or anomalies in how it functions.

I don’t always factor price into things when I weigh pros and cons. That’s going to be up to the individual, and if they buy PDFs or physical copies, or they find a discounted bundle, etc. In this case, though, it is hard not to bring up that catching up on all available resources is over $300, and that if you want unlimited characters stored on your account, you need to have a subscription plan.

Keep in mind, I’m not saying that the rates are unreasonable. I think they are fine. The cost, up front, is steep, and there are people that may not find much value in the subscription option other than saving multiple characters.

While I can’t attest to how well it runs on other mobile devices, even without a native app, this worked amazingly well for me in “real time,” and there are a host of options and useful look up features. That said, it’s a serious investment to get started, and unless your whole group is on board, the subscription model is probably mainly netting you a few extra slots to store characters.

You will also need to do a deeper analysis of cost if your primary means of playing D&D is through a virtual tabletop.

Have you had a chance to play around with D&D Beyond? What did you think? What about other online tabletop tools–what are some of the best, and why? We would love to hear from you!

5 Responses to D&D Beyond Review