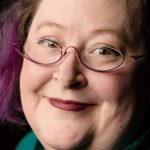 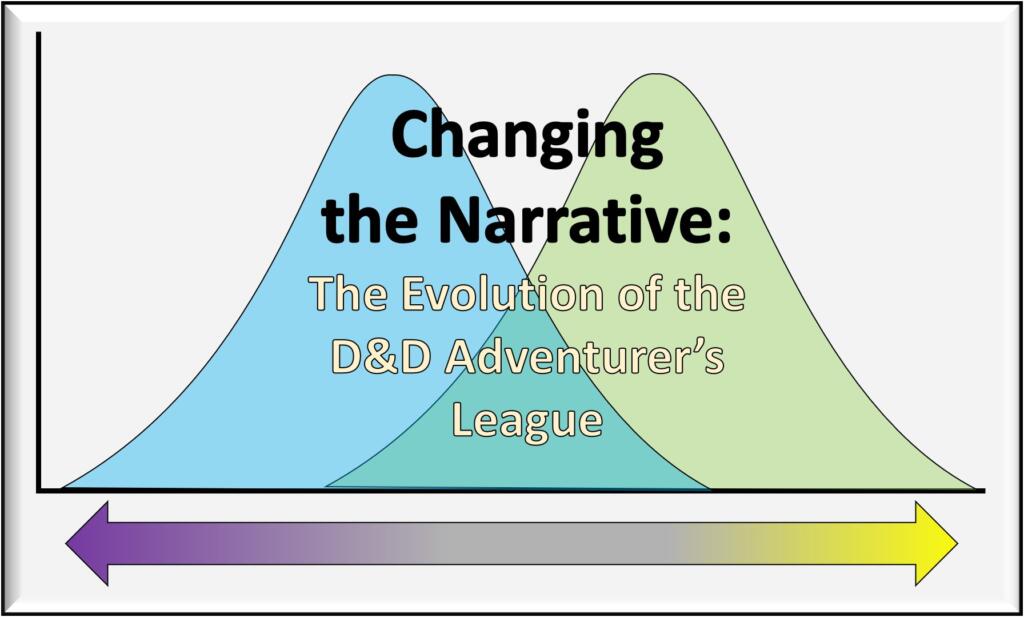 The D&D Adventurer’s League is in the midst of some important changes. While I have no inside information about what drove those changes, why they happened, or what changes might yet happen, I have some thoughts about what might have precipitated them, and why they’re REALLY important for the larger table top RPG community. Here’s what I think. Read it and let me know why you agree, where you think I’m seeing it wrong, and how you think things will play out.

What is the D&D Adventurer’s League?

It’s an organized play system. Everyone builds characters according to common sense rules, and then plays specific adventures. People track experience, gold, and loot. A lot of conventions run organized play games, but you can run them at game stores, and at home too. Most game play sessions are 2-4 hour serialized one-shots that fall into a larger narrative. (Like TV shows in a season.) You don’t have to sign up or register or anything. Just get the build guidelines (for free HERE), read those rules, and start playing. You can find more information HERE and HERE. I like organized play (or “OP”). It’s like “speed dating” for gamers. You can play with a bunch of different people and you will most likely make some new friends and find new people you like. Some people don’t like it. That’s cool. It’s not for everyone. For me, it doesn’t replace a great home game, but it’s a nice addition to some good home games.

The “Old Guard” of Dungeons and Dragons

Some sort of organized play system has been a part of D&D since 2nd edition. Sometimes the company that makes D&D (currently Wizards of the Coast, or “WotC”) is extremely unconcerned with the OP system, other times they’re extremely hands on. OP has adapted and survived through the ages. Currently, it seems (and I’m operating with no special information here) that WotC is extremely interested in active oversight of the D&D Adventurer’s League (or AL). It’s a great way to evangelize the game, find more players, get game stores and conventions involved, and allow new people to get involved.

Given all that history, imagine a spectrum of game styles.

Only a very few people play purely tactical or purely narrative games. In reality — BOTH playstyles are valid and normal ways to enjoy D&D. Most people enjoy a mix of both tactical AND narrative game play.

If we were to graph this out with the types of play on the bottom (horizontal) axis, and the number of people who enjoy that type of play on the left (vertical) axis, we’d get a bell curve that looks like this. 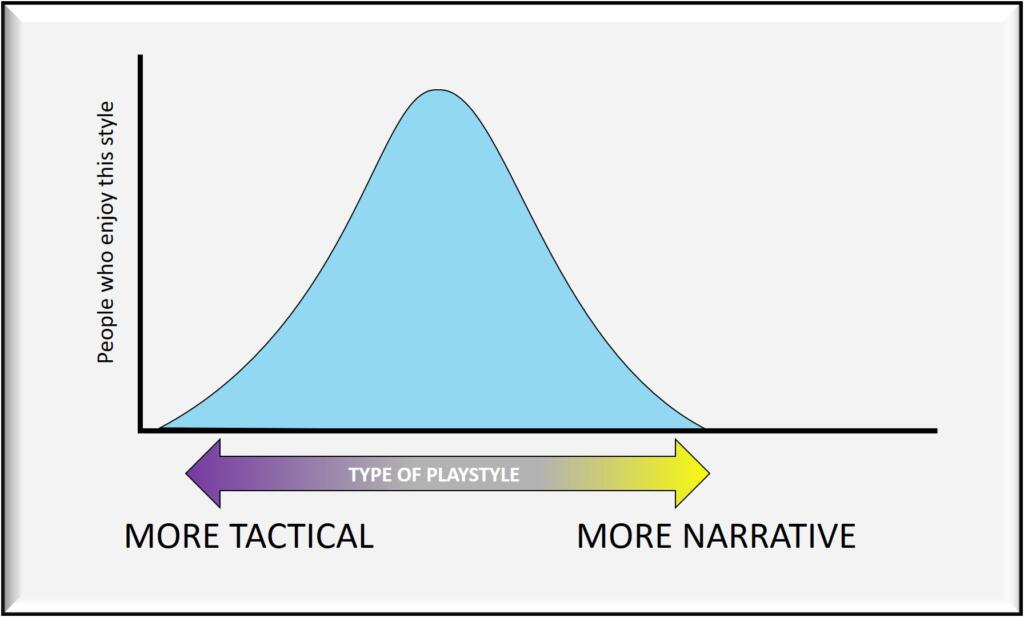 The old guard of D&D and the organized play community enjoys a mix of narrative and tactical play. 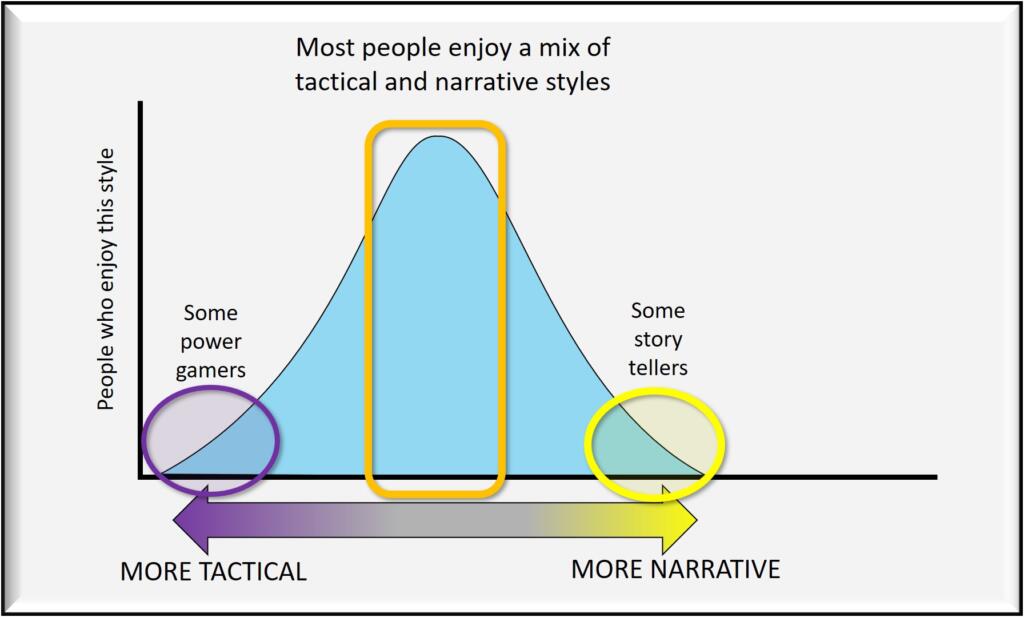 In organized play systems from 2nd edition to the present, the majority of the players learned to play D&D through friends or family. Many of them learned how to play from previous editions, and were familiar with moving miniatures on a grid. In 3rd edition and 4th edition, tactical play was EXTREMELY important, and this whole bell curve shifted to the left somewhat. When 5th edition came around, many of these folks treated this edition similarly to 3rd and 4th. Even though 5th edition has been vastly simplified compared to 3rd and 4th editions, it’s a fine game for very crunchy, simulationist, tactical play. Organized play worked well for it.

Because organized play adventures are often played at stores and conventions, and because of the nature of organized play, the games had some important basic characteristics that strongly shaped how they were played.

The internet has become a big disrupter in our hobby (like it has everywhere else!) It’s hard to believe that Acquisitions Inc. started as long ago as 2008. In 2009 you had the Critical Hit podcast playing D&D. 2012 saw the advent of Nerd Poker. The two shows that really exploded into the mainstream with D&D pod/videocasting were The Adventure Zone in 2014 and Critical Role in 2015. By now (Q1 2019) there are thousands of people playing D&D for your enjoyment on hundreds of podcasts.

These shows, undeniably, have brought a very significant popular interest to the hobby.

And with this interest came new people. Maybe they had never played D&D, but they knew a lot about it from watching/listening to other people play.

I don’t know what to call these new people. I’m going with “live play enthusiasts” but that doesn’t cover it because some of these shows aren’t live, and are pre-recorded, edited, and then released. We’re a decade into this movement, and we still don’t have good language to describe it. Let me know if you’ve got a better collective noun.

And these people are different than the folks I’ve been talking about thus far in some important ways.

Just like above, you could rate these games, and the preferred playstyles of these players, on a scale of more tactical to more narrative, with some preferring one playstyle to the other, but with most people enjoying a mix — just like before. 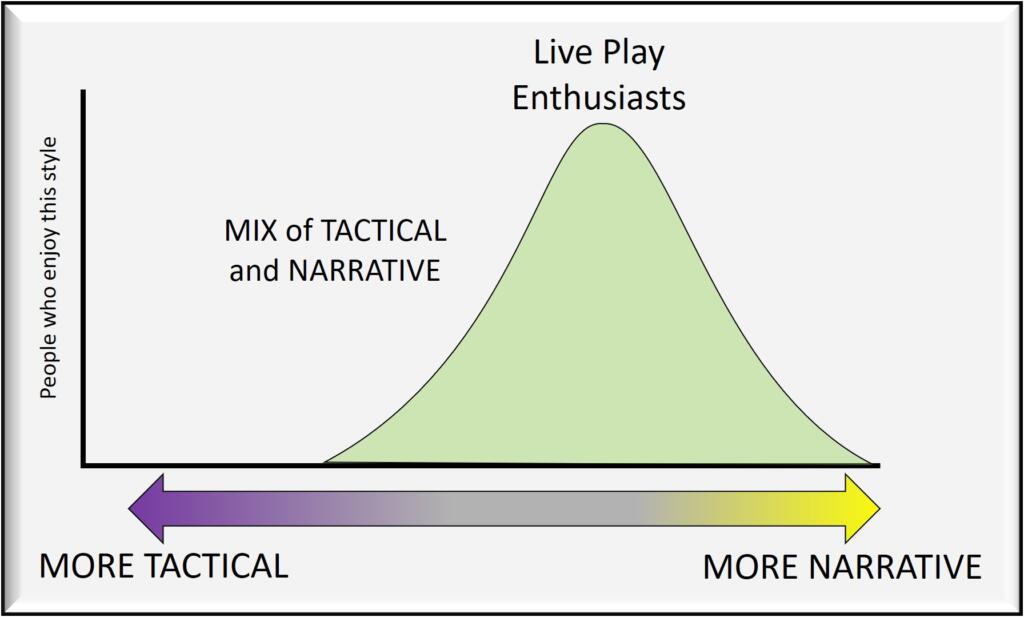 The live play enthusiasts had their whole set of expectations shifted to something that was more narrative because of the nature of live play for an audience. There was overlap between the groups, sure, but there was definitely a gap in their expectations about what D&D should be like. 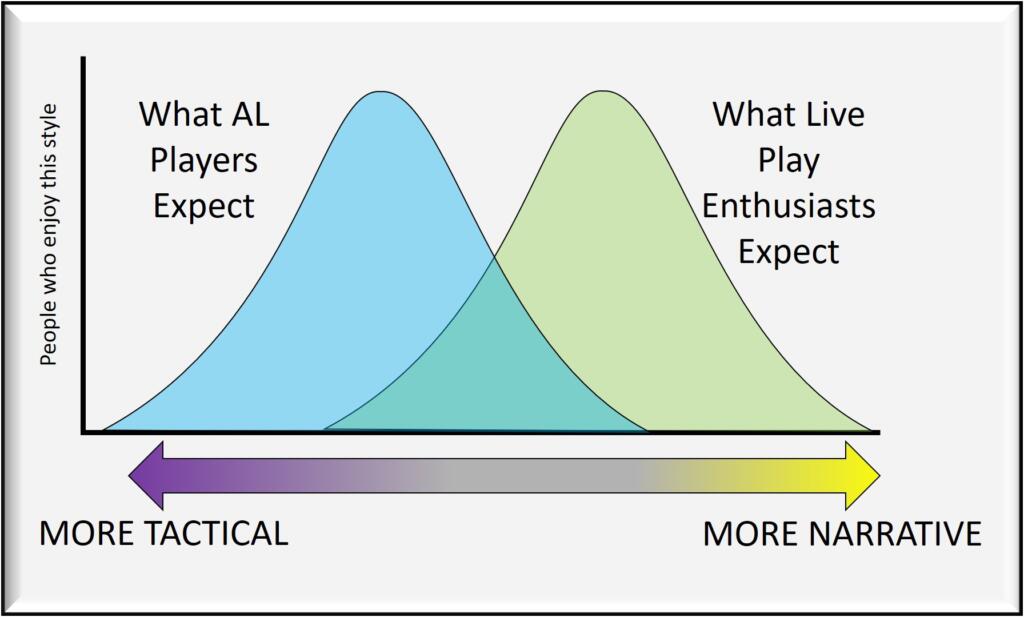 The challenge is, how different are these expectations? There’s no easy way to understand that. The two groups could be pretty close, or pretty far apart. 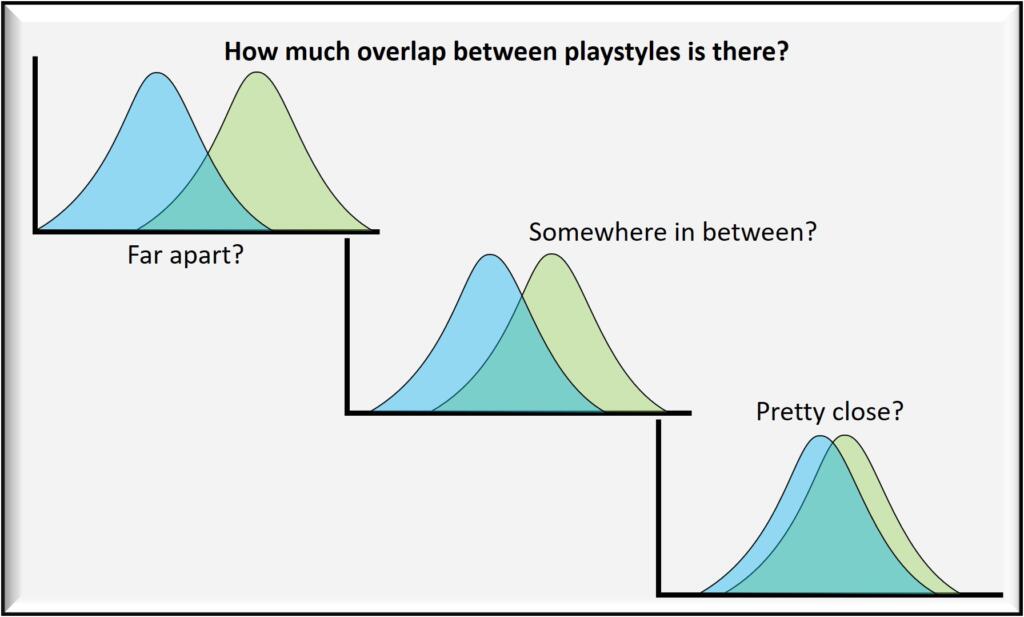 Are the two cultures pretty close, or pretty far apart?

We Need Each Other

Here you have two cultures with different backgrounds, assumptions, expectations and needs. We need each other. BOTH groups want to have a fun time playing D&D with friends. The Adventurer’s League needs new players. D&D needs new players. Those new players are the lifeblood of a healthy hobby. The live play enthusiasts want to play D&D. We’re a perfect match!

This leads to a period where the hobby undergoes some changes as the two cultures merge. Work is needed on both sides. If the Adventurer’s League (and by extension Wizards of the Coast) wants to welcome these players, then the Adventurer’s League will have to shift to meet their expectations and have more narrative options. They need to move that bell curve to the right and explore more storytelling options to be good, welcoming hosts to the new players.

Additionally, the live play enthusiasts are likely to figure out that not every DM is Matt Mercer, one of the McElroy family, or Chris Perkins. The live play enthusiasts will want to be good guests. They will shift their bell curve to the left and experiment with more tactical options than they’re used to in order to adapt to the community. 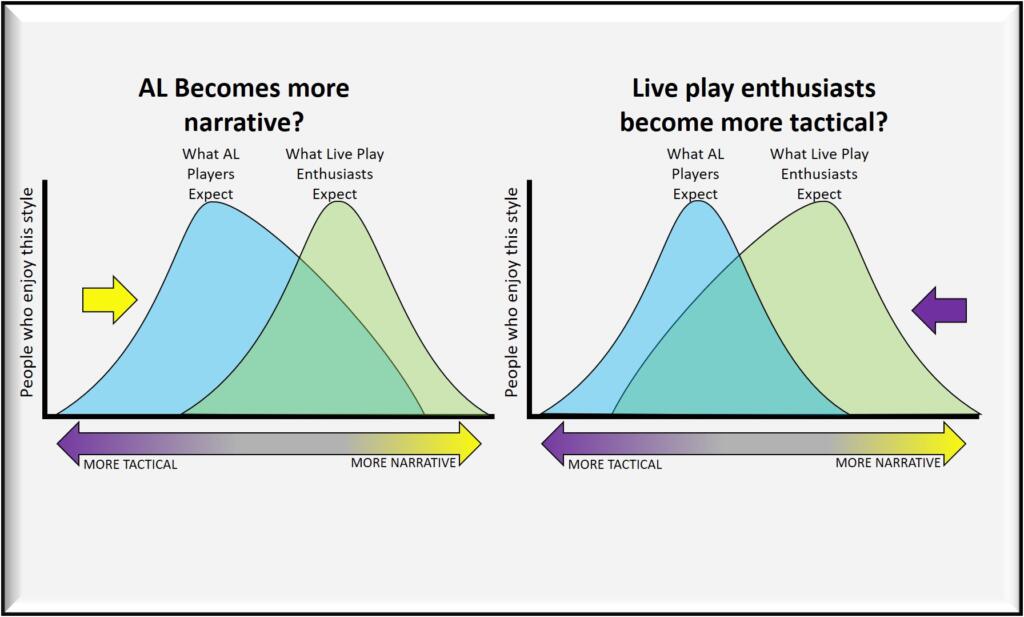 What I expect to happen is BOTH of these things. I genuinely believe both cultures will shift to meet in the middle somewhere. 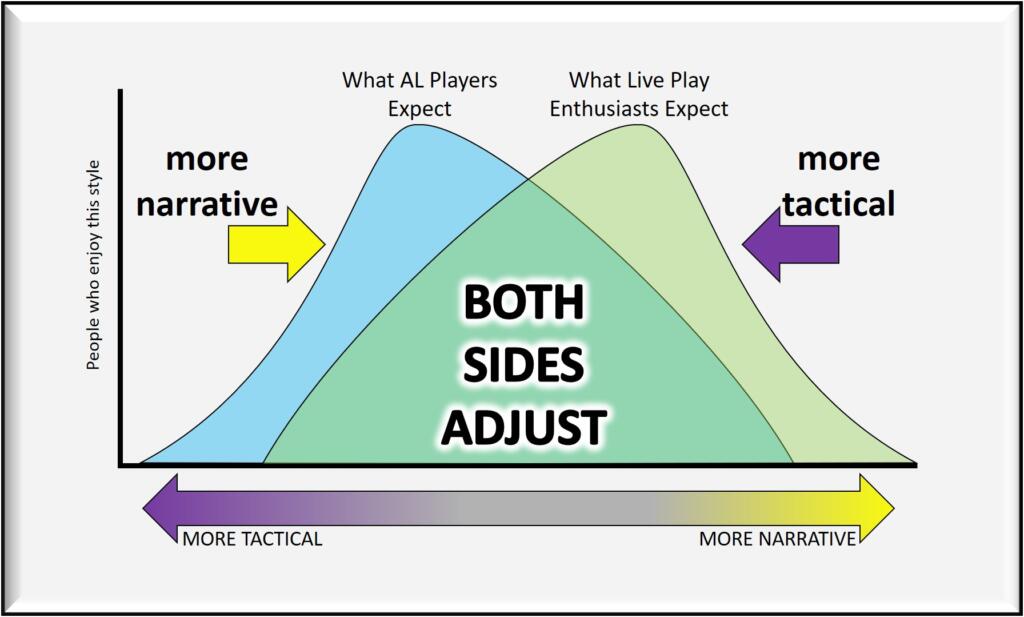 Both cultures are likely to adjust to meet in the middle.

I think we are seeing the AL try to become more narrative. The changes to treasure points and advancement checkpoints aside, the adventures for Season 8 are far more narrative.

As you might expect, the changes are not universally loved. Chatter on Twitter and Facebook seemed to indicate that parts of the AL community felt like no one was listening to them. Change is hard. Change without an explicitly-stated REASON for that change is extremely hard. As I’ve said, I have no inside information, and this is all speculation on my part that the changes have been made to enact a cultural shift to welcome new players from the live-play fandom; no one official has confirmed this. To my knowledge, no one official ever said “hey, we want to welcome new players who are a little different than our old players – what’s the best way to do that?”

What’s next? What SHOULD be next?

Here are some things that I think might help optimize the cultural integration. The business literature is full of advice on how to integrate corporate culture after a merger, and some of those suggestions aren’t too far afield from what we’re seeing here. Do you have some suggestions for what might be, or should be next for the Adventurer’s League?

I think the Adventurer’s League is going through some entirely normal and expected growing pains and cultural shifts, but I’m confident that it will come through them soon and smoothly, and continue to be a vital part of the D&D community.

What do YOU think?

How does the community you come from shape YOUR expectations for the tactical/narrative balance in D&D?Â When and how did you learn to play D&D? What playstyle do you enjoy best?

Do you play in the Adventurer’s League? How long have you been playing? Do you feel it is becoming more narrative? Do you like that? What’s a better way to make those changes?

What changes are ahead for the hobby and for Adventurer’s League?

This is a continuing discussion and I’d love to hear your viewpoints!

I have been playing and creating for D&D since 1982. 5th Edition D&D is my favorite edition and I am proud to write for the D&D Adventurer's League. Other RPGs I love include Deadlands, Shadowrun, Legend of the Five Rings, Dresden Files. Based in Atlanta, I run several D&D conventions there with my husband. Spare time hobbies include travel, cats, and shooting zombies in video games. In real life, I'm a marine biologist and I help clean up hazardous waste sites.