Recently I was cleaning off my desk and found some notes for a 5 room dungeon that I had jotted down. It’s a bit of a silly or punny romp, for which I have coined the term “dadventure”. 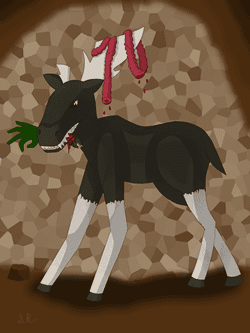 Background: A tribe of savage humanoids made the fatal mistake of summoning a wicked nature spirit. Unfortunately they accidentally summoned a spirit of hunger which escaped their control and possessed a nearby moose, through which it has been scouring the area of life.

Setup: The adventure starts with a small town asking the PCs if they can look into a growing blot of desolation near their home. The spot in question has been stripped bare of all vegetation. Even rocks have been scraped clean of moss leaving large gouges in it’s place. A local woodsman has discovered that the defiled area is centered about a cave that has long held dangerous humanoids, but when he snuck in for a look around, everything was silent, and he felt a strange overwhelming hunger gnawing at his belly and he fled.

Dungeon general details: the entire cave network is spotless and the walls are smooth and covered in scrapes similar to chisel marks. Entering the caves causes a gnawing hunger that gets worse the deeper one goes.

Entryway: The entrance to the cave is a short tunnel that opens into a small unremarkable room. A small plant grows in one corner, a handful of coins scattered around it and the smell of rot emanates from an exit that has been blocked by a pile of large rocks.

Blocked room: The entrance to this room is blocked with large stones and rocks which have been scraped clean like the rest of the cave. Moving them aside allows entrance to the chamber beyond. Inside is a bare storeroom, empty barrels and a few crates are tossed about, bones of all types mixed in. The desiccated corpse of one of the residents of the cave lies near the blocked entrance curled up holding his stomach.

Unstable Room: A large column once held up the room of this chamber but its middle has been removed, the bottom forming a crude table, the top hanging well out of reach above. This has made the ceiling unstable and large chunks of debris litter the floor in stark contrast to the rest of the cave. Crossing the room, unless done silently is dangerous, causing more rocks to fall and possibly strike the PCs.

In this room the hunger becomes overwhelming. From here and deeper in the cave the PCs must be constantly eating to prevent exhaustion and weakness.

Crevice Room: This room tapers off into a narrow chasm. The thin passage has been violently battered and smashed, great hunks of the wall are missing. Deep inside the narrow opening is a small sack. If the PCs retrieve it, it contains a large portion of sticky gumdrops.

Ritual Room: This chamber has a high vaulted ceiling. The walls appear to have at one point been covered in vile murals created by the missing humanoids but the lower levels have been removed with the ubiquitous scrape marks. A loud crunching noise can be heard from the far end. The source of the noise is a large bull moose languidly chewing on a corpse he has drug here. He continues to grind up his current mouth full while attacking the PCs on sight. The strange noise makes the magical hunger afflicting the PCs much worse. They must make a test of wills to do anything other than eat while they listen. If the moose gets something extra crunchy to chew on, this effect is intensified. If he gets something gooey to chew on, like the gumdrops from the crevice, the sonic effect stops. In addition, the spirit has a compulsion to count small objects and if it can be forced to look at a handful of coins or pebbles it must make a test or stop and count them regardless of the situation. Otherwise he is just a large angry moose. 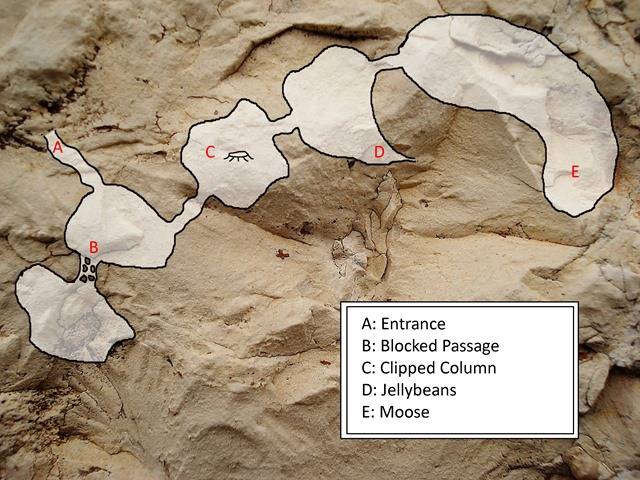 Finale: Once the moose is slain, the spirit departs. Unless banished somehow it may cause further trouble in the area. Cruel GMs may even have it possess a PC and lie dormant for a while…

Final Notes: Of course this adventure was inspired by two sources. The first is the Invader Zim cartoon episode “A Room with a Moose”. The other, of course, was Morris the Moose Goes to School the classic children’s book.