Create Your Own Games on Demand 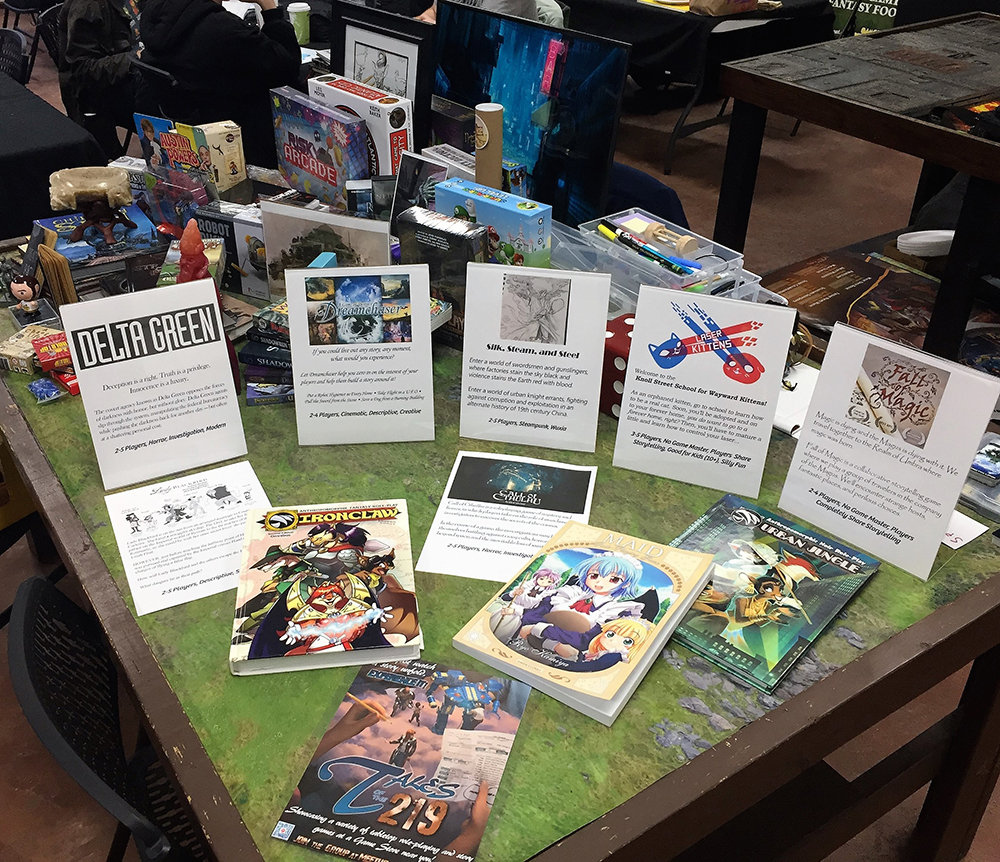 Do you have too many games just collecting dust on your bookshelves?

Is it a struggle to get your players to try something new?

Are you just too busy to finish reading that new tome of a game book?

You are not alone.

As Convention Coordinator for the Indie Game Developer Network and as a self-published game designer, I travel to monthly conventions to sell and run role-playing games. I’m always asking what games people are playing, running, and are interested in. And, let me tell you, there are plenty of others who feel the same as you. They face the same challenges, the same struggles.

You don’t have to go it alone.Â

Together, I think we can build/borrow a system to help solve all of our (current) problems. It won’t cure them overnight, but it will treat the problems and help to create a foundation for other like-minded locals. Together, we can unite to build more than a gaming group. We can create a movement! One to tackle the difficulties of having too many unplayed games, of luring players to try something different, or the reoccurring learning curve of each new game.Â  First things first, we start by building a community. To meetup and game together, we’ll need a pool of potential players and Game Masters. Thanks to social media, this is surprisingly easy to start, however, difficult to master. 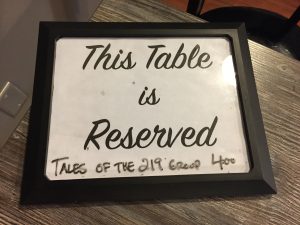 We need a place for people to gather in order to build interest in our idea–our movement. With the utility of social media, we can easily recruit, message, and share ideas (posts) at times that are convenient for one another. A community can be fostered in something as simple as a Facebook Group. You could start today. Add the people you game with, the people that you know game locally, and the Game Masters that run events at local stores or gaming hangouts. Most game stores have their event schedules posted on a website or community board in their store. Take advantage of these to help you find where people are gaming and who is facilitating these games. Talk to your local game store owners about what you’re working on and who else they think you should talk to. Don’t assume that every game played will be publicly posted. Also, dig around for other local gaming groups on Facebook. Search the name of local game stores forÂ  groups that share their name. Search for groups that prominently state your city, town, or region’s name with the keywords RPG, Tabletop, Geek, or D&D. You may be surprised to find how much is already going on right under your nose.

How Will This Solve My Problems?

A model that I’ve adopted in Northwest Indiana is that of Games on Demand. You may have heard of their work or participated in a game with them at Gen Con, Origins, or Pax. Their model consists of several Game Masters, each offering up two or more different games per time slot. Players that attend the event(s), pick from the games offered in a first come, first served basis. They generally select from table tents that give a blurb of each game with a picture. As games are selected, the choices begin to narrow, and focus shifts to filling the games selected.

What Do I Need for This to Work? 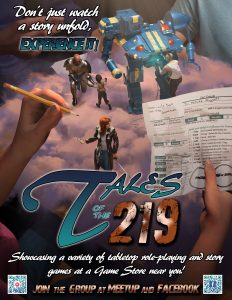 My local contingent is called the Tales of the 219. Yep, that’s our area code! Northwest Indiana Story Gamers just didn’t win over the hearts and minds of our founding members.

On January 31st, we mark our one year anniversary of running events at local game stores on a monthly (and more) schedule. Setting out, I found other Game Masters interested in diversifying the games that they play and struggling to find players for their games not named D&D or Pathfinder. Sharing my vision for a more vibrant, inclusive, and variety rich gaming community, I reached out to local game stores. To their surprise, we didn’t want money or to sell attendees something physical. We just wanted to grow the community of role-players in Northwest Indiana, to bridge RPG enthusiasts beyond their favorite game store, gaming group, or routine game of choice.

I remember speaking to Matt and Jared, two of my friends and early adopters of our vision.

“This (Tales of the 219) is probably going to be like four of us running games for each other for a year or two. But, one day, there will be others, and they’ll talk fondly about how they found the Tales of the 219. We’ll be like forefathers that paved the way to make a more vibrant and diverse role-playing game community possible. This will work. We just need to be persistent and deal with the inevitable trying times that will come with the occasional successes.”

I’m happy to inform you that it never did end up being just the four of us playing each others’ games. We’ve hosted events at six different game stores and one local convention for a total of fifteen events in 2018. Attendance varies from 5-15 individuals with an average of 8-9 folks attending per gathering. At our local convention Arcticon, we held eight games seating over 40 players!Â It’s a good feeling to not only play more games but to help others experience brilliant games they never knew existed.Â

Â It’s a good feeling to not only play more games but to help others experience brilliant games they never knew existed.Â

Some things I’ve learned so far:

Don’t have a game store nearby? Can’t find role-players locally? Have you thought about building an online community or joining something like the Gauntlet? An earlier conception of this idea, this movement, was to build a role-playing game group with a rotating Game Master dynamic. On G+, we called ourselves the Janus GM Project. The members would announce games they wanted to run for the next round of games (like 3 rounds a year) and then we would vote on our favorite titles per Game Master. Each Game Master then knew what game to start reading with months to prepare, read up, or research the game. We’d play each game every other week for a 3-5 session story arc. It was a ton of fun and very effective! We played over twenty-five new games in about two and a half years.

What Are You Really Doing This For?

Maybe, you’re a Game Master overloaded with games that just need to be played. Maybe, you’re a game designer and want to build an audience that will playtest and buy your game(s). Maybe, you are a new player looking for the game that is uniquely your fit, your niche. 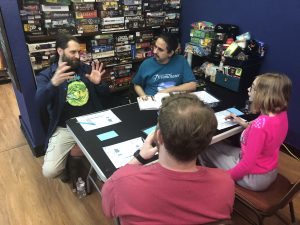 Don’t settle for the status quo. Build a Games on Demand community where you live! Grow the community YOU want to be a part of. Build something for the future players of your neighborhood.

I’ll be there for you. Together, we can build a network that communicates and shares best practices. You just need to be persistent and share your love for RPGs with those near you. I believe you can do it, and this is a fun way to grow the hobby we love so dear.

Special thanks to the crew at the Tales of the 219 (Sout, Matt, Jared, Adrienne, Pedro, Tom), my local game stores (By the Board Games & Entertainment, The Librarium Cafe, Galactic Greg’s, Tenth Planet), and the RPG enthusiasts of the region! Thank you for the added joy to my life!

I want to know:

How have you brought people together in your local area?

How do you attract new players or sway your gaming group into trying something new?

Where do you game and who else could you invite?