Jesse Butler of Calico Games [1] offered me an advance copy of Short Order Heroes, his combination light RPG, character creation supplement, and spontaneous NPC creation aid, and liking how it sounded I accepted his offer. It’s on Kickstarter for $20 [2], with more cards possible if stretch goals are met.

It’s that last use — NPC creation — that interests me, and that I think is most likely to interest Gnome Stew readers. I’m a sucker for anything that lets me quickly develop characters, like our own Masks: 1,000 Memorable NPCs [3] and Rory’s Story Cubes [4], and Short Order Heroes (SOH) fits right in. 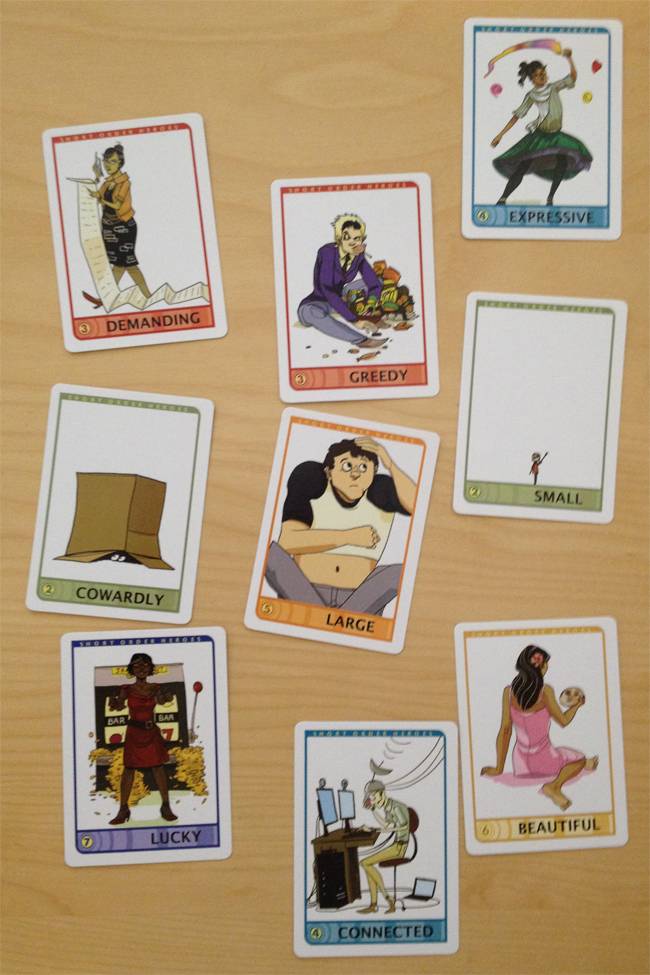 SOH is a deck of cards, all illustrated by the same artist. The art style is whimsical and evocative; whimsical might not be a plus depending on the game you’re running. I love that the artwork features men and women of different shapes, sizes, and colors and isn’t full of cheesecake or stereotypes. The cards are on a nice heavy stock; they’re pleasing to handle and look like they’ll hold up well.

What I like most about it is that it just works. Here’s my first spread of three cards:

If I just need a personality, the adjectives are plenty; I’m already picturing this character and how she’d act. If I need appearance, I’ve got three options (and could also blend two or more of the three). Profession? All three cards suggest one, with “Fearless” being the most interesting to me — maybe this NPC is a stuntwoman.

Want to go deeper? The numbers could stand in for the strength of each respective personality trait (from 0-7), so she’s quite elegant and fearless and a bit capricious. Or they could represent stats/skills, for example by having the first ability she tests during the scene be weak (the 3) and the next two, if applicable, be quite good (5 and 5). Hell, you could use the colors for something as well.

I love this character. As with the first NPC, I can already picture him: tall, good-looking, and charming, a genius in his field but lacking common sense; I bet he gets himself into trouble. Play up those three traits and I’ve got an instant NPC my players will instantly “get” and likely remember later.

I dig Short Order Heroes. It’s a neat product and a deck of cards is an easy addition to most GMs’ toolkits. I’d love to see a version that’s pure NPC inspiration; different art styles in the deck and a few names matching the art style on each card would expand the inspiration potential for me, and make the deck even more useful.

If SOH sounds like your cup of tea, take a peek at the Kickstarter [2].

Conceptually these cards are awesome, but I do find the “whimsical” nature of the illustrations to be a pretty big downside.

Maybe if I ran lighter-hearted fare…

Yep, definitely easier to get inspiration for some games than others unless you can look past that. I imagine it’s tough to produce a product like this with multiple art styles/genres without the costs going way up.