Create a One Page System Today 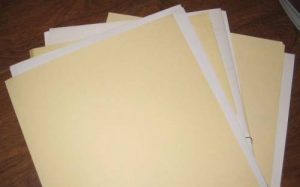 As a GM, we often want to run a different genre or try out a new mechanic. However, learning an entirely new system can be overwhelming. Believe it or not, creating a one-page system can be quicker. Think of it this way: if you can read 50 pages an hour, it will take you 6 hours to read a 300 page rulebook. Using the tips in this article, you can probably create a one-page system in about an hour.

Now, we are not trying to write a new system from scratch. Rather, we are taking another system and adapting or condensing it. There are a number of free and commercial one page systems out there for you to consider or mine for ideas. However, writing/adapting your own one-page system can help you hone your writing skills, and perhaps change the way you (and your players) view the rules. Plus you’ll have a simple little system that you can use for con games or pick-up games in the future. I have three folders with the rules, pregens, and maps sitting in my GM box right now, ready to go.

Before we start, let’s get some ground rules and concerns out of the way. One page means one side of a sheet. (Of course, you can use both sides if needed and I’ll never know.) But shoot for one side for now; see how far you can condense the rules. Obviously one-page systems can’t provide extensive spell or feat lists, and as GM you’ll just have to make some calls. One-page systems are probably better suited to one-shots or short campaigns, but don’t dismiss them out of hand. After all, even complex systems generally come back to just a handful of basic rolls.

Here are the steps:

1. Pick your dice/task resolution mechanic. Just take your favorite one and use it. I use 2d6, roll attribute or under for my one-page games, but use whichever you prefer. As long as you understand the percent chances for most rolls, you’re good to go. You’ll use these for most non-combat situations.

2. Hone your attributes. Look at the attributes from your favorite system. Adapt them to reflect the kind of things that characters actually do in your genre. What we are looking for is 6-8 attributes that act as VERY broad skill groups. For example, suppose you want to adapt standard fantasy attributes for a space game that encourages players to boldy go. Perhaps INTELLIGENCE becomes SCIENCE, and WISDOM becomes MEDICINE. Add to the list if you would like. If you’d like to run a fantasy game with the traditional attributes, consider adding THIEVERY, HEALING or others to avoid needing extra skills or an additional dice mechanic. Decide on a reasonable starting point package for your 6-8 skills.

3. Decide on special abilities. You can give characters a limited number of spells or special abilities, even in a one-page system. Simply make it a bonus to the attribute roll when they use the special ability. These can also be professions. If you say your character is a thief, she gets an extra dexterity bonus when doing something thief-like. If you want these to be an automatic successes, limit their usage to once per day or some other time frame. Keep this list small. These are only the main special things that the genre requires. For example, a neck pinch and a telepathy ability once per day can easily model a Vulcan. Give each player one or two things to be extra successful at, and they’ll be happy.

4. Pick a hit point and damage mechanic. You can probably lift hit points or a damage track from your favorite system. You may wish to streamline damage though, as you won’t have room for an extensive armor or weapons list. Think small, medium, and large damage (perhaps 1d6, 2d6, 3d6) and you probably can cover most combat situations. Healing situations can work on the same scale. For example, perhaps you can heal 1d6 in the field, 2d6 if you have healing spells or a special kit, and 3d6 in a hospital or sickbay.

5. Decide on combat resolution. Use the same dice mechanic that you chose in step one for combat. However, in combat, you will be calling for rolls each round and for damage rolls. You want combat to be exciting and not depend on a single die roll, but try to avoid too many fancy rules. If you and your players like a lot of tactical combat (flanking, attacks of opportunity, etc.) see if you can just give them a flat bonus in situations where they may have some advantage.

6. Decide on any special rules for vehicles. Avoid writing different rules for vehicles if you can. Use attribute checks to resolve how well they can pilot or drive a vehicle. This is a much more character centered approach, as seen in film and television. With one page, you don’t have room for a lot of vehicle stats. If you wish to give players a special bonus (or penalty) for special ships or poor equipment, do that just like you did for combat.

Now you can make some pregens using the starting point package. This process will help you find any problems in your choice of attributes or special abilities. Use the back of the page to write your first adventure, and find some players. Make some notes during your first game, and you can easily adjust the rules.

Give it a try, and let us know what you think below.

8 Responses to Create a One Page System Today