An exciting new gaming book with the help of Kickstarter and donors like you, Corporia RPG is a setting that takes place in modern day if the Knights of the Round Table were reincarnated into CEOs. It has 4 days left on Kickstarter to earn its goal. The game piqued my interested because I love Arthurian Legend and I had never heard of another game that has done this. I’ve just had GMs make scenarios using D&D where our group of PCs had to find Arthur. I was lucky enough to interview the creator, Mark Plemmons. 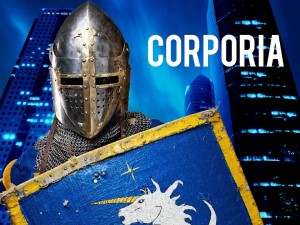 Mark Plemmons creator of Corporia: I’ve worked on several tabletop role-playing games over the years, mostly with very complex rules, so I wanted to create Corporia with rules that allow for a lot of freedom but still have an overarching structure. My shorthand for these core mechanics is the GRAIL system.

Let’s start with character creation. For that, you use a point allocation method, choosing one of three options (Touched, Gifted, and Fluxed) that determine how many points you can put into your character’s abilities. Each character is composed of six Core Values and a handful of related Skills, plus personality Traits, rule-modifying or character-assisting Assets, and a few statistics like Movement and Defense that are derived from Core Value and Skill combinations.

In game play, to determine the outcome of your character’s actions, you add one Skill statistic to a related Core Value statistic, then roll 2d6 (aka the Flux Dice). You take the highest die from the Flux Dice roll and add it to the [Core Value + Skill] total. If the roll meets or exceeds a Target Number or enemy’s opposed roll, the action succeeds. Otherwise, it fails. (A roll of a ‘6’’ on a Flux dice roll indicates that die should be re-rolled and the new result added to the previous one.) There’s more, of course, but this is the core of the system.

So, you’ll only need a pair of d6s for character actions, but you will want to have a standard set of polyhedrals (d4, d6, d8, d10, d12, d20) to cover a variety of weapon damage statistics.

RPS: What was the driving idea making Nimue part of the good side? I have seen stories where she is evil or neutral. Will any of the other Ladies of the Lake make an appearance? I really like the idea of Merlin being a helpful AI. How will Morgan Le Fey be represented?

Mark: All of the reincarnated characters’ personalities are mostly true to what we know of them from Arthurian legends, but just being in the modern world gives them more opportunities to approach their goals in new ways. Nimue’s a good example of this. In her privileged position as Lancelot’s aide and seer, she’s got wealth, status, and power – all of which would have appealed to her centuries ago. She even has a version of Merlin to interact with, though he’s a sentient computer program instead of a wizardly mentor. Guinevere, the Lady of the Lake, and Morgan le Fay are discussed in the last chapter, which is specifically for the Director (aka game master) and filled with secrets, so I’d better not reveal anything about them here. They are important parts of the setting, though! 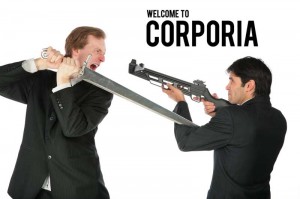 Being a knight with a shotgun, hells yeah!

RPS: Can the players play any of the reincarnated knights?

Mark: The setting as written includes Lancelot, Nimue, Percival, and Merlin as primary character allies. The missing King Arthur is also an important part of the adventures provided in the confidential Director’s chapter, as are Guinevere, Morgan le Fay, Mordred, and the Lady of the Lake. Otherwise, none of the legendary Knights of the Round Table or other characters are pre-determined – and the Director can always just change the names of these non-player characters, if she wants to do so for her gaming group.

And there were other knights of Camelot besides those of the Round Table! The pages detailing the reincarnated Knight-Errant character archetype describe six different knightly orders that were part of King Arthur’s court: the Knights of the Round Table, the Table of the Wandering Companions, the Knights of the Old Table, the Queen’s Knights, the Knights of the Watch, and even the sadly-named Table of Less-Valued Knights! As I noted in Corporia, King Arthur’s court is said to have had between 50 and 1,600 knights, so there’s little danger in running out of options!

Female knights aren’t a problem, either, since women could become knights by being the holder of their knightly husband’s land (inherited or conceded to by special privilege) or being inducted into an order of knighthood. These women were known as ‘chevalieres’, and though there are no known female Knights of the Round Table, there may have been some within the other knightly orders. And if you really want to bend some genders, you can try playing a male knight reincarnated in a female body – or vice versa!

RPS: What is it like working on a Kickstarter?

Mark: Kickstarter is a great option for ‘indie’ publishers who want to keep total creative control over their products, or who want to test the waters and see how the public reacts to the product. Of course, it’s also like having a second job. I spent over a month working just on the Kickstarter page design, getting in touch with press contacts, and all of the other details, but in retrospect I could have used even more time than that!

RPS: Why did you make this a solo project when you have made so many other gaming related things with partners?

Mark: Most of my previous credits – be they writing, editing, art direction, layout, or whatever – were earned over the 10+ years I was on the staff of Kenzer and Company. I created Corporia as a solo project since my current day job is outside the gaming and hobby market, and because I had a very particular look and feel that I needed to get out of my head and onto the page before I started showing it around. Fortunately, I didn’t have to create Corporia in a vacuum. I still have a lot of friends in the gaming industry, and I got excellent feedback and advice from several of them. A big shout-out goes to Jim Davenport (of the Serenity/Firefly-related products, among others), who I list prominently in the credits. 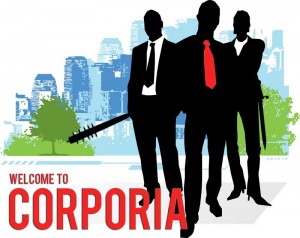