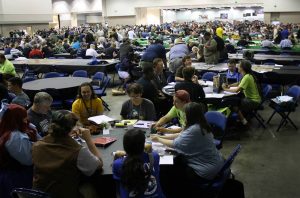 Do you know where your game is?

GenCon officially starts in under a week and I’m freaking out. It’s a good kind of freaking out. The kind where I look at a random nerdy friend, grin like a maniac and yell, “CONNNNNNN!!!” at a loud volume. Luckily the non-nerdy people around me are mostly used to my eccentricities by now.

I love game conventions and I hit between five and seven of them every year. GenCon is, by far, the biggest behemoth of the bunch. They’ll probably top 60,000 people this year which is an insane number of nerds to be invading one city. Hordes of people throng the streets of Indianapolis in their funny t-shirts, eye-catching cosplay, and all the nerdiness you would expect of a gaming con. Most of the restaurants within walking distance of the convention look forward to this time of year because gamers have proven themselves to be excellent patrons that tip good service well.

This is actually going to be my first GenCon as a GM. While I run at the smaller cons I hit every year, I’ve always stuck to being a player at the big two, GenCon and Origins. This year I wanted to defray some of the cost of attending and I thought it was high time I tried my hand running at a bigger con. As you might imagine, I’ve been a bit nervous and obsessed with the prep I need to do ahead of time.

There are plenty of articles out there offering tips and tricks on surviving and thriving at gaming conventions, but I don’t know if I’ve seen one targeted specifically at GMs. Since this is at the forefront of my mind, I thought I would share some thoughts:

This is a good rule of thumb for anyone attending a convention, but it’s especially crucial for GMs that need to be at their best. So what is 6-2-1? The idea is that each day of the con you need to make sure you get SIX hours of sleep, TWO decent meals, and ONE shower.

Some people will say you can get by on five hours of sleep, but I know I’m not that young anymore. If I don’t get at least six, I will be the walking definition of a sad panda.

On the food front, it’s easy to forget to take time to get a decent meal and way too easy to fill up on junk food. Making sure you get in two decent meals is crucial to keeping your energy levels up. It can also allow time to socialize with friends you may not be gaming with during the con and that alone makes it worth squeezing into your schedule. 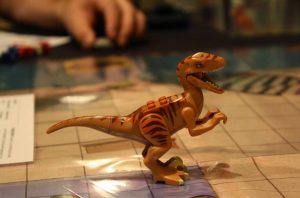 If you need a dinosaur, you better have a dinosaur.

GenCon takes over a large swath of Indianapolis and games can be scattered anywhere between the convention center and upwards of ten hotels in the area. Find out where your game is going to be held well before the start time. Waiting until 15 minutes before the game only to find out your table is a half mile away is going to make you late for your own game. Some players may be understanding, but they shouldn’t have to be. Even at smaller cons, show your players some respect and make sure you’re there on time.

Speaking of showing your players some respect, make sure you’ve got all the materials you need to run your game before the players show up to the table. I’ve heard of people making checklists or even just double checking themselves before leaving their hotel room for the last time before the game. Whatever way works for you, make sure you’ve got everything together and ready to go. Character sheets, table tents, handouts, dice, resource materials, and so on. When your game is in the same building as your hotel room, it can be easy enough to run upstairs and grab what you need but when your room is half a mile away, you better have everything together.

Food was already covered under 6-2-1, but staying hydrated is just as important and serves two purposes. First, getting dehydrated is a quick way to give yourself a headache and make yourself sick, neither of which makes for a good GM. Second, you’re going to have to do a great deal of talking. Having a bottle of water handy will help keep you from getting too parched and losing your voice. I’m not sure a drink at the bar in the evening with friends really counts as good hydration, but it’s at least good for networking.

Have Some Medical Supplies

Speaking of losing your voice, even if you do your best to prevent it, it still might happen. The more games you run, the more talking you’re doing. Because of this, I highly recommend keeping a supply of cough drops and your pain reliever of choice in your backpack. Whether you’re starting to get a little froggy in the throat or can’t shake a persistent headache, you’ll want to have something handy so the game can go on.

Ultimately, when you’re running games at a con, you’ve volunteered to help entertain four to eight people for a few hours. Since they’re taking a chance on your game and may have paid money to be there, it’s only fair you give them as good an experience as possible. What are your survival tips and tricks for hitting GenCon?