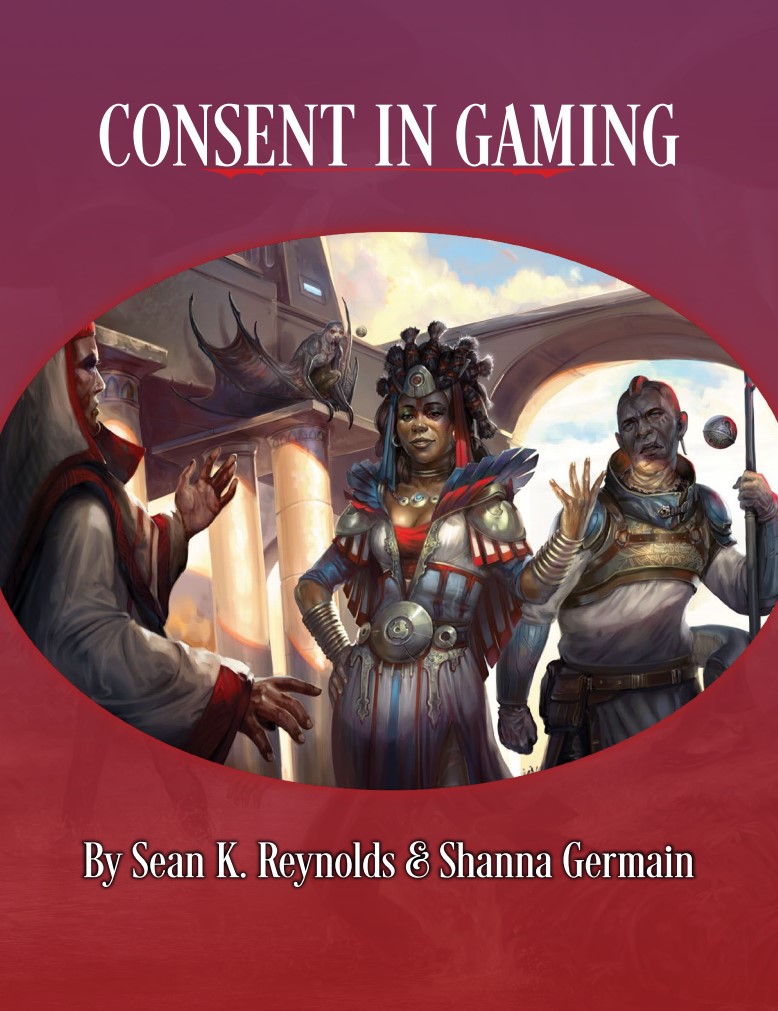 Generally speaking, I don’t usually review short-form products on Gnome Stew. Additionally, I often don’t do formal reviews for products that are free. I also try very hard not to do reviews for the same company in back to back review articles. This week’s review is going to be a special case. This week, I’m going to look at Consent in Gaming by Monte Cook Games, a free product released last week.

If you have read a wide range of my reviews, you may have noticed that I am especially concerned with the roleplaying game industry providing better safety guidelines and content warnings in products. It is something I strongly believe in, and I hope it is the direction in which more game companies move.

One thing I wanted to address in this review is that this product was met with a lot of negative commentaries online the day it was released. Many people ridiculed the concept of a document that provides guidelines for consent at the game table. Other people made the case that concern for the boundaries of others at the game table would ruin a gaming group or the hobby as a whole.

The product is a 13 page PDF, including a cover, 12 pages of guidelines, and a Consent Checklist on the final page. The product features pieces from MCG’s impressive art library, and is formatted like other MCG products, with double column layout and additional space for sidebars worked into the page design.

In the 12 pages of discussion on consent, eight sidebars are summarizing the information presented in the text, or reprinting relevant portions of Your Best Game Ever. The sidebar format is also used to provide a side note to various topics brought up in the text, without interrupting the flow of the discussion.

In addition to the initial presentation of the topic, which stresses that no one but you can set your boundaries, and how the default assumption without informed consent is “no,” the PDF dives into several other topics, such as:

The document covers a lot of ground in 12 pages. While I was expecting a general description of consent, and an explanation of the consent checklist and how to use it, I wasn’t expecting the broader range of topics like recovering from consent mistakes or the importance of aftercare and check-ins.

What is noteworthy is that while consent is integral to a safe table, it also acknowledges that in some instances, people make mistakes, and discussing the proper way to mitigate those mistakes is as important as having a resolve to not make the mistakes in the first place. It’s very easy to decide to follow a procedure, then give up on that procedure when making a mistake. This stresses the importance of a sincere apology and desire to rectify any harm that has been done.

I am also thrilled to see an examination of how not to use the safety checklist, that even with consent, topics that are agreed upon for game content don’t need to be the predominant element.

While I think this document presents a very solid outline for consent in games, I am also glad that the final page lists additional resources on the topic of safety at the game table, rather than trying to be the final word on the subject. Anyone with this document in their campaign toolkit is going to be well prepared for a safe and enjoyable campaign, but it never hurts to expand knowledge of safety and consent issues.

The sample sections include topics grouped under the following headings:

There are also lines to write in any topics that aren’t mentioned on the list, as well as a section that allows the player to provide feedback on their concerns for the GM. I appreciate the utility of this checklist as a handout for tabletop groups.

A lot of discussion that has surrounded this document has revolved around the need for it, especially in established gaming groups and communities. I thought I might share a few of my personal experiences, experiences that I feel would have been much easier to navigate if safety and consent had been a greater priority in the hobby.

A few years after I started running RPGs for my friends, I was running a session where the party was deep in a series of caves. I provided a very detailed, very specific description of the giant spider that the party encountered. One of my friends was very uncomfortable with this description.

Because I was very bad at empathy and had a lot to learn about being a good friend and a good human being, seeing his discomfort, I layered on even more disturbing descriptive elements. He left the table. After several years of being part of the gaming group, he never came back. It took me far too long to realize that he quit showing up for game night after I pushed him past his breaking point. We were all still friends, and we still spent time together, but I lost a player and some valuable time with a friend, sharing something we both enjoyed.

I won’t go into details, but I had a moment with a character in a campaign, where I described my character putting herself in a vulnerable position. I was playing with people I had played with for years. Another player crossed a major boundary in the narrative between his character and mine. I was too stunned to react. When I reflected on the situation, the first thought was not to bring up the problem, because it was my fault for putting my character in that situation. Then I realized how much that sounded like the guilt and recriminations that far too many people face in real life. I could never play that character again.

I was in a convention game, with a GM that was well regarded by most convention-goers. The game was marked “for mature players,” but I had assumed this would be because of the flurry of F-bombs I usually heard emanating from the table. In the session, our characters were whimsical superheroes fighting Greek gods run amuck. In one scene, we came dangerously close to being compelled to perform actions that I’m not comfortable having a character commit against their will. The only thing that derailed this was player action, not GM discretion.

Finally, a regular player that I considered a friend was in several games with me, at a point in time when I was having some serious turmoil over my religious convictions. He had no way of knowing this without me mentioning it, but he was continually making jokes about religion, and it became especially stressful for me to be at a table with him, even though I generally enjoyed his company. I eventually wrote him an email, directly, but instead of discussing the issue, he dropped out of any games with me. I wish we had a better framework in place to have set up the discussion on the topic of religion at the table.

These are just a few of the mistakes that I have made, and the uncomfortable positions I have been in, as a gamer. I’m a cis white male, and I’ve run into these issues. The potential feeling of power imbalance and concern about upsetting established group dynamics becomes even worse for anyone from a marginalized community.

Go Words
Â Even if you don’t use this exact set of tools, it’s a free and well-written examination of the topic that also gives you a jumping-off point to look at other safety tools and practices that you should be using at your table.Â

This is a great document. I normally don’t factor price into reviews, but the fact of the matter is, it’s hard to argue with free. This covers a wide range of topics and more broadly than I would have expected for a free product. The consent checklist is a wonderful addition for any campaign toolkit, and is something that should see lots of use at session zeroes across the gaming hobby. Additionally, not only does this address its premise well, it gives resources for even more research on an important topic.

There isn’t much I can say to detract from this product. The closest thing I can come up with is that I wish this text was included specifically in various game products, as well as being a separate download. As a slight accessibility note, the red/yellow/green rankings for topics might not be as friendly to some disabilities as it could be, but this is partially addressed by also providing shapes unique to each color as well as color-coding them.

Strongly Recommended–This product is exceptional, and may contain content that would interest you even if the game or genre covered is outside of your normal interests.

This is something everyone should be downloading. Even if you don’t use this exact set of tools, it’s a free and well-written examination of the topic that also gives you a jumping-off point to look at other safety tools and practices that you should be using at your table.

What are some of the things you have done to make your game tables more welcoming? What kind of check-in procedures do you have in place? What are your favorite safety tools? We would love to hear about it in the comments below.