I recently got to play two sessions of Marvel Heroic Roleplay (which rocks — it captures the feel of supers better than any other RPG I’ve played, including FASERIP Marvel; see Don’s recent article for more in that vein) and I used a trick to speed up my turns that I thought was worth sharing. While I was a player in this game, not the GM, the trick applies equally to GMs — and to games other than MHR.

Doing stuff in MHR involves building dice pools, with d4, d6, d8, d10, and d12 being required in various quantities. Most pools you build will be slightly different, you often need multiple types of dice in a single pool, and it can take a little time to get used to assembling pools.

After my first session, to which I brought five full sets of polyehdral dice of different colors, I realized I could speed things up a lot by color coding my dice by type. 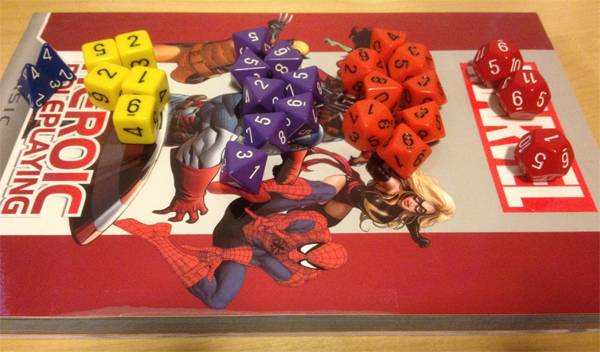 By using a different color for each die type, I could keep my dice in a big pile and still easily grab the ones I needed. It worked like a charm, my turns got faster, and I was able to focus just a bit more on everything else I did at the table.

When I mentioned this on Google+, Tim Noyce made a great point:

Nice trick and sooooo simple. I am very interested in teaching RPGs and using them to teach. Giving the new players colour coded dice means that you can say “roll the yellow one”

Fellow gnome Don Mappin and I joked during the session that we could put our dice in a muffin tin to make it easier to find specific types, and clever gamer Moe Tousignant on G+ took that joke and turned it into something cool: a teaching tool for new players combined with a convenient way to run pickup, store, or convention games where you don’t expect people to necessarily bring the right dice, or the right amounts of each die type.

The muffin tin is a pretty good idea actually. It would be good for passing the dice around the table (which is what I did for our launch event).

…and how it turned out:

Used the muffin tray last night and it worked great. 5 spots were for dice and the 6th we used for our Plot Point beads.

If all you need for the game you’re running is a handful of d6s or d10s, this trick won’t save you any time (although even then, I’ve color coded single-die-type pools by using two colors: the dice I roll most often are one color, and the rest are another, so I can grab the common pool easily), but there are a lot of other games that use multiple dice which might benefit from this trick.

If you have a lot of dice, it’s easy to try it out for free. If not, it’s pretty cheap to buy dice in specific colors — and worth it for a game you really enjoy. I generally buy single dice directly from Chessex or from GameStation.

I hope this trick is useful to you!

10 Responses to Color Code Your Dice