Closure and Finality – Parting is Such Sweet Sorrow 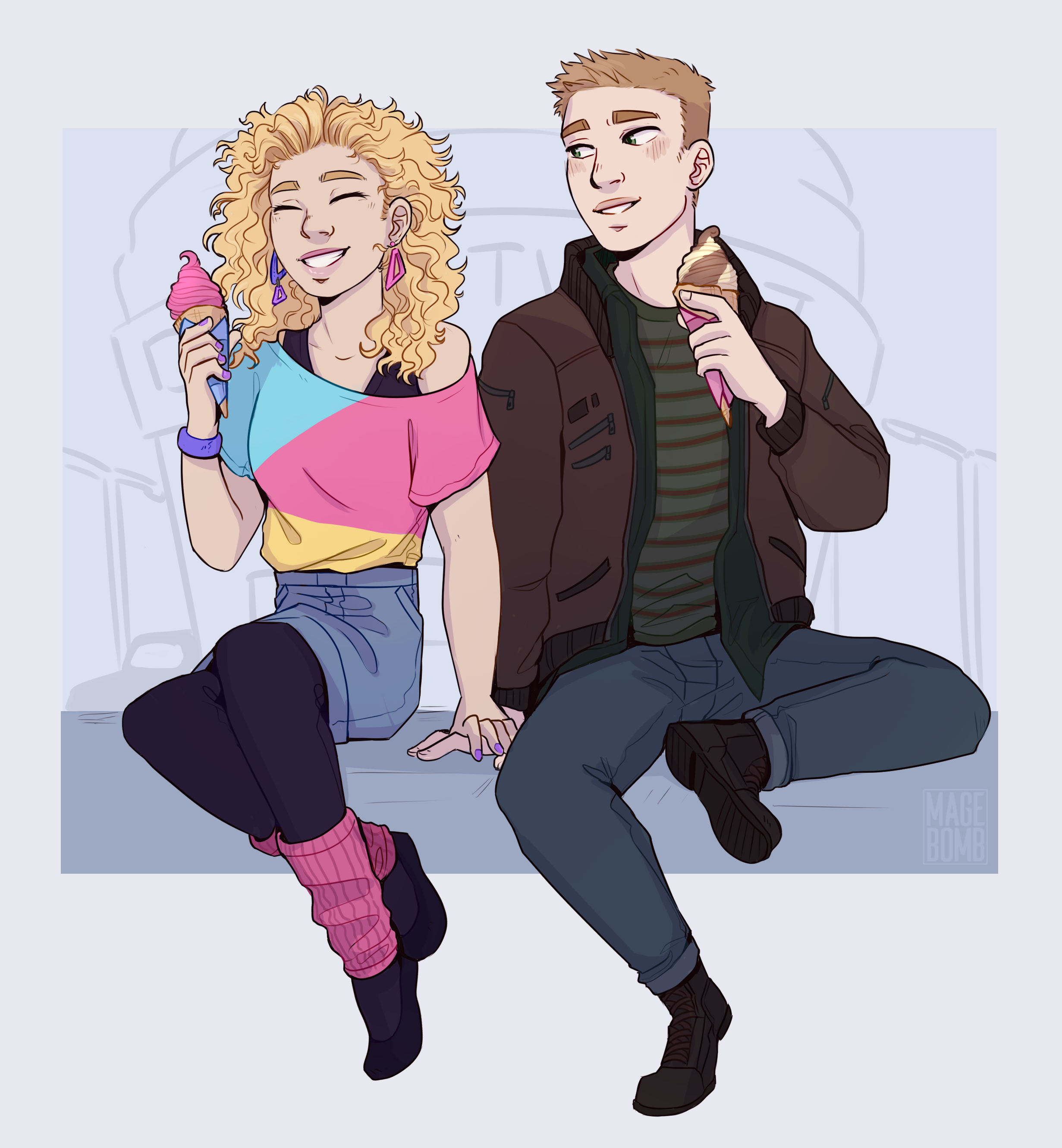 Stacie and Harrison, a commission by Casey Sharp @magebomb_

This article was jointly written by Senda Linaugh and Wen Reischl.Â

It’s a story we all know. The Popular Girl with a wellspring of opportunity before her (Stacie) meets the Troublemaker with the heart of gold (Harrison). He’s already head over heels in love with her when the story begins, but we play to find out will they or won’t they. Over two seasons and a decade of their lives they are almost irrevocably torn apart. He leaves, and we rejoin their story on the eve of Stacie’s wedding to someone else. The second season ended, after the final battle, with Harrison putting a ring on Stacie’s finger and asking if they could finally give their relationship a try.

As players it left us knowing what Harrison’s outcome would be, with a corrupting alien force holding his body together and knowing he would never let himself slip to the point he could hurt the people he loved. We knew he wouldn’t live a full life. But we had hope that he would make good use of the time he had left. There was one final question to answer, what would Harrison and Stacie’s lives look like while they were together? The lure of finality and closure meant we couldn’t let Stacie and Harrison go quite yet. Last Thursday, we went back to these characters and found their ending.Â

It’s not often that I walk into a game expecting (wanting, almost? Certainly that’s what we sat down for) a character to die. There are many conversations about agency and managing character death out there, how to avoid it, talking agency in allowing or disallowing it, table policies, etc. Walking into a story that is specifically about the death of characters requires a high degree of emotional investment and a willingness to participate at the table. It’s something I’m familiar with but not something I approach lightly – I am a fan of Catherine Ramen’s Red Carnations on a Black Grave, for example, but it’s not a game I’ll play with just anyone, or pull out for light entertainment.Â

Character death, when given weight and meaning, is a rare opportunity to find a tragic, cathartic, human story that can give us poignant hope because of their sacrifice.

Character death, when given weight and meaning, is a rare opportunity to find a tragic, cathartic, human story that can give us poignant hope because of their sacrifice.
In Avengers: End Game (spoilers) we see Tony Stark’s death as the culmination of his character’s story. Martyring himself, choosing to die to protect others was the climax of his arc, an emotional high point for himself and the broader story. Contrast that with Han Solo’s death in The Force Awakens. That was a shock that spoke not to Han’s story, but worked as a catalyst that deeply changed other characters and moved the plot forward.

For the three of us who sat down to play last Thursday, we knew that this story — the story culminating in Stacie saying goodbye to Harrison — was the only story we were telling. In many instances a character death may be part of a longer running campaign, or happen within the context of a greater, ongoing story. These points were all important to our single session of ending, but depending on your circumstances you will want to choose what you apply as it makes sense to your game. So how do we accomplish character death or permanent removal as closure and finality at the table?Â

Senda: As a character, Stacie started as the stereotype of a popular girl to me. It was fun to lean into that as an experience I hadn’t had growing up. As I played her through two campaigns, she went from the girl who had it all to the girl with nothing, and then built her way back up, somehow maintaining a lot of her innocence despite watching her world crumble around her at 13 years old. Stacie allowed me (three times!) to play out different sad, but not abusive, relationship ends — to practice how these difficult moments in my life could look without some of the real baggage that I carry with me. She gave me the opportunity to be in three different types of young love — the middle school crush, the college engagement, and the adult return to a childhood love; with a letter break up, a “this isn’t going to work because you scare me” conversation, and having to end her husband’s suffering. She was a safe space for me to experience and practice so many emotions, and I needed to leave her in a place where she wasn’t in limbo; where I knew there was hope for her, that her resilience would pull her through.Â

I love that our games can go on forever, but I love even more that we can accomplish closure for our stories. To paraphrase Good Omens, if you want to imagine the future, imagine a boy and his bubble gum and his car. And a summer that never ends.Â

Wen: Over these last 2 years, Harrison has meant more to me than I can describe. In all I’ve written over 200 pages about this character whom I played perhaps a dozen times. I love him dearly. I needed Harrison, in a very real way. But I’ve also moved beyond what I needed Harrison for. He represented change, the end of book one and start of book two in the trilogy of my life. Harrison deserved a story arc befitting his place in my life. His end in the arms of the woman he loved was his reward, and also mine. I needed to know he had lived a good life, one that wasn’t just struggle, and to send him off into the beyond knowing that he had and protected the family he always wanted.

This session concluded with one last image, a bittersweet vignette that recalled one of the happiest moments of season 1, when Stacie taught Harrison how to blow bubbles with bubblegum (her iconic item). Whether it was a flash in the moment of his death or a scene from beyond I’m not sure. But we see him one last time a boy sitting on the trunk of the car blowing bubbles.

In my grief I’m left wanting more and expressly satisfied to know that there never will be more.Â

Â Yet I should kill thee with much cherishing.

Have you given a final ending to a character you adored? Have you helped another player bring a satisfying conclusion to a character they were playing? How did you prepare? When did you decide when and how to end a character’s story?