Clone a Great Campaign and Make It Your Own 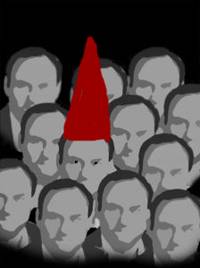 I’ve never tried this, but it seems like a logical extension of the fact that GMs should be raging kleptomaniacs.

Over the years, I’ve played in some great campaigns — including some that were truly amazing and sublime. They all had one thing in common: they ended.

That’s not a bad thing, mind you — campaigns should end. But why leave it at that?

If you loved a game from 10 years back, why not try to recreate it? The mix would be different, and you’d be different, too, but I suspect a lot of what made it great the first time would carry over for the rerun.

Ranking your top 10 campaigns (an idea floated by a good friend of mine, who’s also in my gaming group), in addition to being fun and instructive in its own right, could produce some good candidates. If you want to steal a former campaign — yours or someone else’s — it would alsmost certainly be one that appeared in your top 10.

Importantly, if you looked at a campaign that was:

…you’d be safe from repeating something that your current group would recognize. You’d have to acknowledge that they’d be different, but there’s a lot of room between “different” and “sucky remake.”

You’re a confident, sexy, new-age GM — you know how to tell something that was awesome a decade ago from something that would be awesome now. I bet most GMs could pull this off.

For me, I’d try to recreate my friend Stephan’s Twilight:2000 campaign from 2001 (oh, the irony). It’s my #2 campaign of all time, it was an absolute blast, it meets all of the criteria above — and its awesomeness isn’t just nostalgia. It was short-lived, so I felt like there was so much more I could see.

I could take the same building blocks — tense firefights, a delicious language barrier between comrades in arms, and, best of all, the incredibly evocative picture it painted of a world sliding inexorably into complete chaos — and use them to kick off a longer-running game, one that explored everything we never got to do back in the day.

I wouldn’t worry about recreating every detail — in fact, that wouldn’t be my goal at all. I’d be trying to replicate the feel, the big picture, and make my own small stuff. In movie terms, it’d be a remake with a different ending, not a shot-for-shot remake.

I think this could work pretty well, actually. How about you?