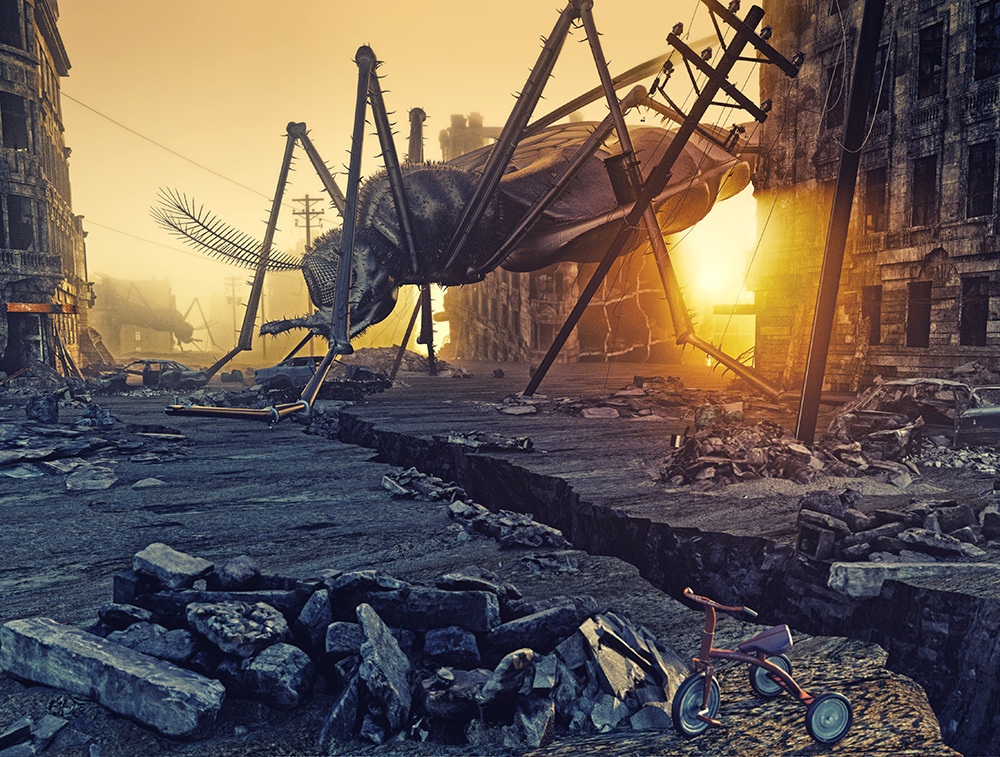 To start with, I decided to open the 5e Monster Manual in two random pages. I got the Chasme and the Water Elemental as the nominated monsters. Ok… We could go two ways about this. Either we create a battle between these demonic mosquitoes vs the water elementals, or we mash the two monsters into one. While not bad, the first idea didn’t convince me enough. I would have to recur to the usual two cultist groups invoking monsters that fight against each other.  The second idea, however, made a much more interesting concept in my head. A demonic mosquito made out of water does sound intriguing.

Chasmes are gigantic mosquitoes from D&D that come from the Abyss. In other words, they are demonic creatures, and don’t usually appear to torment people unless they are invoked by someone. They have two very interesting abilities. Drone creates a droning sound so horrid it can drop its enemies unconscious. Additionally, it has a proboscis attack to suck the life out of its enemies, making them weaker. In D&D, there is no saving throw to not get weakened (have their max hp reduced until a long rest), making this ability terrifying.

The lore of these creatures indicates they are intelligent, often used as interrogators or taskmasters. I personally don’t dig this concept so much with the head cannon I created for my new water mosquitoes, so we are going to scratch that. These are going to be intelligent enough to follow orders and take snap decisions, but that’s about it. Now, what else can we add to these creatures by combining them with a water elemental?

Water elementals are living bodies of water that swirl and engulf creatures in their path. They usually have a chaotic attitude and are brought from the elemental plane by a conjurer. The most interesting thing they have is that these elemental beings can stay in the same place as other creatures and whelm them, having these poor victims drown in the living water. I also find it quite dumb that they don’t have any trait to become invisible in normal water. Let’s add that to them!

What if we decided the chasme was made out of water? That makes it much more interesting. What’s more, the elemental usually tries to suffocate their victim inside themselves. Chasmes, on the other hand, drain blood from their enemies. By combining the two, we can have a mosquito that sucks the oxygen out of their enemies. Just that already creates a perturbing image in your head, right? That means we are walking the right path with this idea. As this was not enough, why not make these giant water mosquitos elemental beings instead of demons?

Since both creatures are usually invoked into our world, we’ll go with the classic cultist group. This also makes it very easy to adapt to any kind of setting, as cultists that create monsters from primal energy can be found anywhere (sci-fi is a bit weird, but could be stretched to allow something like this without breaking immersion). As these “air-suckers” (for a lack of better name) are elemental beings, the cultists will be from the Cult of Elemental Chaos. D&D has many adventures that feature these, so I would recommend stealing ideas from there. I, however, have my own personal thing planned out for this encounter.

As the air-suckers are made out of water, cultists invoke them in cities and towns next to dams. Then, they proceed to break down the dam, freeing gallons and gallons of water, enough to flood the entire locale. While the townsfolk rally and hide inside their houses, water begins to break in. The air-suckers travel invisibly in the water, forcing the townsfolk to get in the water and have their oxygen drained. If you are playing D&D or a similar RPG, consider the chasme just made an attack roll, and if it hit, that meant they could drain blood from their enemies, no saving throw required. Taking inspiration from that, we are going to make it so that when an attack from the air-sucker hits, the victim instantly starts suffocating.

The cultist group are fanatics who believe that civilizations are a way to create order. As the world was created by pure chaos, it should be left that way for paradise to exist. No paradise can be created by enforcing order and laws, thus civilizations shall perish. Player characters need to stop this cultist group from killing everyone in town, while the air-suckers ambush them coming from the waist-high level of water left by the broken dam.

What do you think of this chasme + water elemental combo? I’m pretty sure you can come up with a better name than ‘áir-suckers’ for these monsters, but after a week that’s the best I could come up with. Which system do you think best fit these monsters and why? Let me know all about it in the comments below!