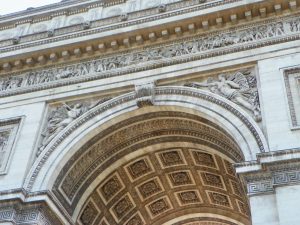 In fiction writing, there are three generally accepted character arcs: change, growth, and failure. Of course, in writing novels, the author can plan and plot this all out for maximum effect. In the collaborative storytelling nature of role playing games, this is much more difficult. The player may want a growth arc, but is continually given choices that lead to either change or failure. Before I dive into the nuances, let me explain the different types of arcs a character can experience.

The series of events in the story leads to a change within the core of how the character acts within, reacts to, or views the world around herself. Something integral and incredibly different comes about in the very nature of the character. Sometimes, it’s something held deep within the character that finally surfaces, and other times this comes about through strong external forces being applied to the character to force the fundamental change.

These changes can include the coward becoming brave in the face of adversity, the introvert leading troops into battle after an inspiring speech, the “farm boy” stepping up when needed to be the hero to overthrow a despot. These changes don’t have to be world-shattering. Even the “class nerd” gaining the courage to ask a a pretty girl out to prom can be monumental to the character.

Keep in mind that this arc is how the character changes within their world, not how they change the world around them.

This is the typical arc for most PCs. They grow in ability, power, prestige, and honor. However, I challenge players and GMs to find ways to evolve the characters’ internal traits to be stronger and better, not just the numbers on the page. This can be done by taking the noble squire and giving them greater responsibilities within his honor code, or putting more folks within the care of a friendly healer. These external changes to the world around the character can bring about strong, internal changes to the PC.

If a player wants a growth arc for their character, they need to plant seeds in their brief backstory. Then they need to make sure the GM is aware of the seeds and where the player wants them to grow. Then it’s up to the GM to weave in moments and NPCs from the backstory for the PC to take advantage of. This is a bit more work for the GM, and a careful balance must be put to use to ensure one PC is not always in the spotlight. However, the player will be more invested in the game through their growing character, and this leads to more fun for everyone at the table.

This is another popular arc for PCs. When I talk about failure, I’m not talking about the “natural 1” on a d20 (though, that can be a catalyst for a shift in the character). The best example in fantasy role playing literature of a failure arc is that of Lord Soth from the Dragonlance realm. He was a powerful knight who fell from grace through a series of events and ended up becoming one of the most dreaded undead in all of D&D lore, the Death Knight.

Going through failure arcs for PCs is tricky in nature because it usually ends up with the player handing their character over to the GM for an extended period of time, if not permanently, while the former PC turns into an opposing force as an enemy NPC. This is not always the case, but it is a very distinct likelihood. It all depends on how things play out.

Failure arcs typically happen to those with some decent power or ability already in hand. It’s hard to start out as a dirt farmer and fall much lower than that. That means these types of arcs are a slow burn with a long build up. Anyone interested in a failure arc for their character must be prepared to wait for the payoff, but it can be very interesting when it happens.

As GM, I tend to use the failure arc on a PC-turned-NPC because of a player leaving the group. It’s interesting for everyone at the table to see a former ally show up at a pivotal moment (the group usually expects assistance) and then the ally turns out to be an enemy in disguise. I don’t always play the betrayal card this way, but the times I’ve done it in the past, it’s been incredibly rewarding for everyone at the table.

Find an arc for your character. It will make playing them quite a bit more fun as you see the core of the character’s traits evolve with the statistics on the sheet of paper. For GMs, find ways to allow characters to change over time. Perhaps the salty rogue has a heart of gold and will eventually evolve into a shining paladin. It sounds like a long stretch, but I’ve seen it happen.

How do you see your characters change and evolve over time? Let us know in the comments!