Welcome to our very first guest article. Scott Myers, one half of the blog T-shirt Avalanche, has been a part of my gaming circle for the last ten years and is a regular traveling companion to many of the various conventions that we Princesses get to throughout the year. Beyond that, Scott is a board game aficionado and one of the most enthusiastic gamers I have ever had the pleasure of knowing. When he introduces you to a game, he doesn’t care about teaching you the rules as much as he wants to teach you to love the game as much as he does. ~Ang 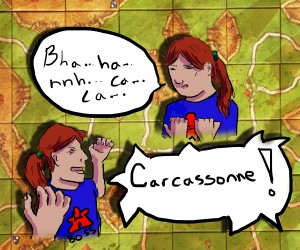 Art by Chris Mann, capturing the essence of Scott’s love of the game.

There is a wonderful trend making board games more accessible today.  One of my favorite moments in a game happens when people get into a thrilling game, and discover there is an expansion!  Additional rules, components, and variants can make a game much more interesting.  Game reviewers don’t often talk a lot about the value of a good expansion, which can revolutionize a game.  Today, I’d like to talk about how to use a LOT of expansions.

I play many board games, but whenever people ask me what my top-5 games are, Carcassonne, Klaus Jurgen-Wrede’s tile placement game and winner of the 2001 Spiel des Jahres award, is always on my list.  In the game, players place their pieces on cities, roads, cloisters, and meadows to score points.  It was recently played on Wil Wheaton’s Tabletop.  Those player pieces, by the way, are called meeples, and have become a kind of banner of the modern board game movement.

Carcassonne is a delightfully straightforward game which plays well with up to 5 people — until you start adding expansions.  To date, there are about 30 additional package sets and about 500 tiles.  You can add more sets to that count if you include alternate language editions by international publishers, alternate scoring methods, homebrew sets, house rules, plus several stand-alone games in case that isn’t enough.  The point is, there is a lot of Carcassonne in the world!  That’s wonderful to me, but the challenge is convincing people to actually play them.  It can be a daunting task to explain how 50 different gadgets work, all at once!

Which brings me to The Carcassonne Marathon, held by eight brave companions a couple weeks ago.  The goal was to play every Carcassonne tile and rule ever published, all as one ridiculously complex game.  I own them all, so it was just a matter of making it happen.  I knew I would need to explain a lot of the more exotic rules, and I knew I would need to make the game accessible.  Also, because I have attempted much smaller scale games, I knew some expansions don’t play well with others.  Some expansions are annoying if they drag on a long time, and some expansions just aren’t very enjoyable.  The Plague Expansion, as an example, becomes a tedious burden in which everyone places a plague token until the plague runs its course.  If there are 12 Plague Tiles, mixed in with 500 other tiles, the plague will take a while to run through!  I needed to come up with a way of introducing rules, keeping them manageable, and let them run their course at a good pace. 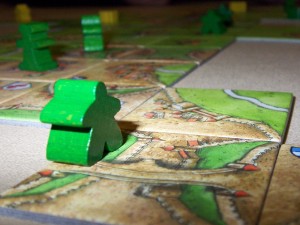 The meeples shall inherit the earth… or at least the game table.

Once that idea was in my head, it was a natural progression to put everything into one age or another.  With the help of our game’s host, I put every tile on a table and started sorting them into groups of thematically and mechanically relevant sets.  This left all the regular tiles, anything without a particular symbol or gadget, in a big pile.  We opted to keep some of the better-loved expansion bits in this Common pool as well, such as the Inns and Cathedrals, Traders and Builders trade goods, and the Cult Spaces, which nicely compliment the core game’s cloisters.  On game day, we threw a literal handful of these normal tiles into each age.  Here’s what we came up with:

This got us halfway through the game, with 226 tiles in about 6 hours.  Did I mention that this would be a very long game?  This is a ridiculously long game, which is probably the main reason you shouldn’t actually play with all the expansions.  It will take a really long time, especially if you are enjoying a casual evening with eight people and dinner!  You can see a stop-motion video we captured embedded below.  We decided to call it an evening, with the game sitting in wait, in our host’s guest room.

I will continue with Part Two next month, when I shall discuss some of the goals and challenges in sorting 500 game-tiles into manageable groups that all make some kind of sense.  Hopefully, we will have ended the game by then.