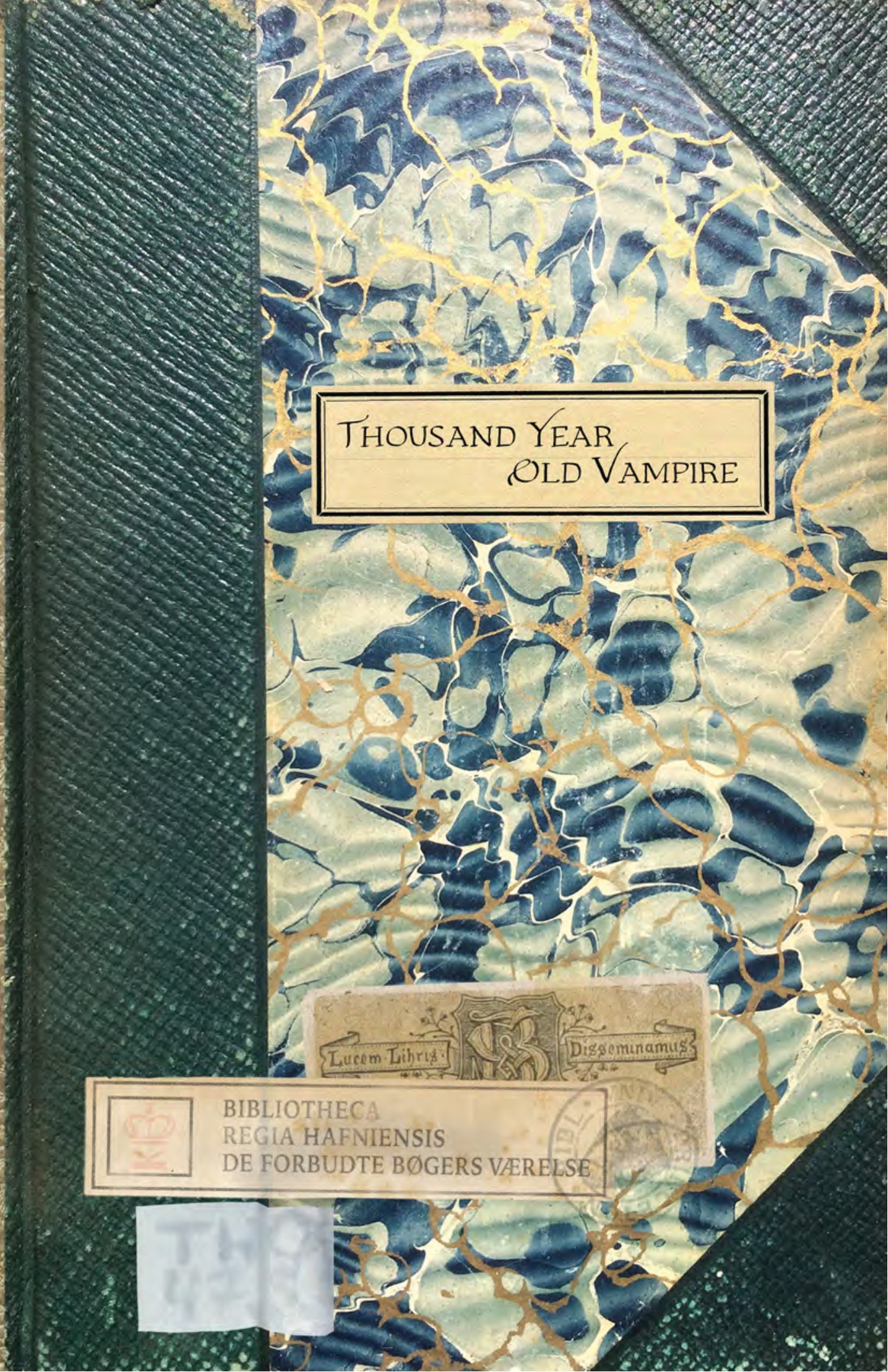 Over the last two months, I’ve been looking at the game Thousand Year Old Vampire, by Tim Hutchings. It is a journaling game that you play by recording facts about your character, then rolling dice to answer prompts. These prompts may make you change some of those facts. You have a limited number of memories, and eventually, you have to fight to remember everything that you once were.

Camdon Wright, amazing fellow gnome and game designer extraordinaire, is the one that first asked if I would be interested in looking at this game, and as I’ve never played a journaling game like this before, I was very curious to see what would happen.

Holding Back the Years

As a refresher, my vampire was Jorgrimr, a Viking mercenary who helped secure Kiev around 1000 CE. Jorgrimr was turned into a vampire by a mysterious black wolf, fled Kiev, moved to Germany, and adopted the name Wolfhart.

While he violently clashed with a rival’s troops and fed on them, in his new life, Wolfhart met a girl named Kisaiya, and found a cure for her blood ailment by researching the Blood of Czernobog. He’s feeling pretty human for the first time in about 50 years.

This is going to get messy.

I don’t get too graphic in this chapter, but there is still a lot of violence, reference to severed body parts, and a general disdain for human compassion on the rise, so if that isn’t your thing, please continue accordingly.

This prompt tells me that I fall asleep for 100 years, and must strike out any mortal characters on my character sheet.

Wolfhart begins to chronicle who he is and what he has accomplished. Foremost on his mind is his arrival in Kiev, his family, Kisaiya, and his invention of the elixir that cured her. He is tired from his work with the mortals, but almost feels human again.

When he awakens, Kisaiya and his work, even who he was, is like a dream that he can only remember when he reads his diary. When he finds out how long he has slept, he realizes Kisaiya, Anichka, Ranssi, even Konstantine are all long gone.

He wants to mourn, but he doesn’t know why.

Wolfhart creates a Diary, and moves a memory to that Diary. All his mortal Characters are gone.

The prompt tells me that my Diary has been damaged, and I have to remove three nouns from the Diary.

Wolfhart spends another 100 years in a blur. Everything is like a dream. He feels nothing. He does the bare minimum to maintain what he has. He haunts Germany, and when he finally realizes how much time has passed, and what he must do to maintain his estate, he realizes he has neglected his Diary.

Why am I going through the motions of this long unlife?

This prompt tells me that generations have passed, and I wake up covered in dust. I lose a resource to determine how I escape.

The remnants of the house guard of Wolfhart’s estate, the children of his mercenary company, loot the estate that they once guarded. They set fire to the home under which Wolfhart was buried after an unfortunate rockslide trapped him in the caverns under the manor. After the fire burns away the passages, the rocks fall away, and he realizes that he has lost even more time to his carelessness. He must get control again. He must not let time keep sliding away like sand through his fingers.

He forgets everything about his old love. He knows she existed. Or maybe she was a dream. Has he ever known love?

This prompt tells me that I gain a creative skill based on a lost memory due to timeless introspection.

Wolfhart is sure he loved at one point in time. He reads poetry and stories of doomed lovers. He learns to write his own stories, and shares those stories with others. He feels the shadow of something he once knew, and he is even less sure that he ever truly knew love. Can the written word cast such a spell on the mind?

This prompt tells me to check a skill to avoid arrest, and if necessary, create a mortal character to take the blame for your crimes.

Gregor Langstrom is a “monster hunter,” using Karina Strausshammer’s inventions to fight the supernatural. He is getting closer to Wolfhart. Wolfhart does not want to feed on the people reading his books, but he can’t make himself care about the real people as much as he cares about the people he makes up in his stories.

The authorities close in on Wolfhart, so he manages to frame Langstrom as a crazed, obsessive zealot, killing people that were reading “perverse” books, and undermining society’s moral framework.

The prompt tells me to bond with an ancient enemy Character, checking a skill to become friends, and sharing a resource with them to gain a shared resource from them.Â

Wolfhart is increasingly annoyed with humans. They feel so ephemeral compared to the people he writes about. His stories speak of epic people that live life on purpose, not weak-willed folk that don’t appreciate beauty or the thrill of living. They might as well be dead.

Wolfhart decides to find his “origin,” to track down the Black Wolf. He uses his skill at ambushing others to trap the wolf, but he doesn’t kill it, as he once fantasized. Instead, he feeds it half the Heart of Czernobog, while eating the other half. He wants the Old Gods back in the world, and he wants to know if the Son can become the Father.

The Black Wolf feasts with him, and shares control of the Great Pack with Wolfhart.

Wolfhart checks the Ambush skill, and shares the Heart of Czernobog. He gains access to the Great Pack resource.

Prompt #19
Â I don’t know that I will ever truly sleep again . . . I may only lie awake in the dark, in my mockery of a life, waiting to journal again.Â

This prompt tells me that I am physically trapped in a place from which I can never be rescued, and asks me to come up with what I think about for the first thousand years. It informs me that the game is over.

Wolfhart feels no kinship with the mortals any longer. It has been too long since he had a friend. Wolfhart has the pack now, and he rampages, destroying Strosshammer’s new society that is spreading across Europe. He will single-handedly turn back the clock and make mortals live by the sword and their wits again.

Then, the Black Wolf turns on Wolfhart. This is a Europe rife with possible worshippers. Wolfhart has served his purpose, and the Black Wolf drops him into the Void of Czernobog, a place of darkness between worlds. Because Wolfhart shared the feast of Czernobog’s Heart, he will always have a feeling of what the world is like, moving on without him. For a thousand years, Wolfhart hears the prayers of the faithful in the Black Wolf’s ears, but Wolfhart shares the hunger that he obsesses over, unable to feed.

The Black Wolf thinks about Wolfhart’s hunger, and he becomes a mad god, one that demands as much sacrifice of flesh as of will. In this way, at least, Wolfhart knows he continues to shape the world from the void. Or does he?

Is this all a dream? Is this Niffelheim? Did you die all those years ago, when the wolf bit you? You are so hungry. You are so cold. But you must be still affecting the world. Surely you wouldn’t lie in the cold, eternal winter, having lost your greatest battle, unmourned and unremembered.

Thoughts On An Unlife Well LivedÂ

I really enjoyed this process. Now that I have a taste of journaling games, I think that I may have been transformed. I may have to feed on more of them. I don’t know that I will ever truly sleep again . . . I may only lie awake in the dark, in my mockery of a life, waiting to journal again.

Recommended–If the product fits in your broad area of gaming interests, you are likely to be happy with this purchase.Â

This has been an unorthodox journey of a review process, but if you enjoy wondering exactly what you would do in challenging situations, I think you are going to find a lot of worth-while material in Thousand Year Old Vampire.

I’ll be honest, I’m kind of worn out after that roller coaster spiral that my vampire went into at the end. It took a lot out of me to try to do the story justice, but I also really enjoyed the process.

Do you have any other journaling games you would recommend? What was your experience with them, and what kind of emotional charge did you have after completing them? We want to hear about your experiences below!