Calling Out: A Review of Syrinscape

Admittedly I’m a bit of an easy sell when it comes to inserting technology into my tabletop games. My viewpoint tends to be one of “take any tool given” and try to find a way to make my games better. So when I heard about Syrinscape my interest was piqued, essentially since I’m a big fan of incorporating many senses into one’s games. Using audio in your games isn’t groundbreaking, but Syrinscape brings a new methodology that might fit right in your wheelhouse.

Many Sounds, One Player

Syrinscape takes a series of high-quality sound samples and packages them into “SoundSets” that you can use through their stylized player. These SoundSets are thematic in nature and include many sound samples built around a central theme, like a rowdy tavern. Where Syrinscape differentiates itself is that each of these SoundSets includes a number of preset “elements”–such as “Bugbear Battle”–that mixes the various samples, adjusting their volume to create an audible landscape. So, for example the aforementioned “Bugbear Battle” is comprised of nine samples: Battle music, growls, sad noises, axe and shield, battle cry, hoots and hisses, curses, more curses, and ill wind. The elements, “Battle Begins,” “No swords,” “Defeat is imminent,” and “Surrender” all use these nine samples in different ways. Not every element will use every sample and most samples are not a few seconds long but minutes long. So repetition is minimized; you don’t hear that same wolf howling every 15 seconds. 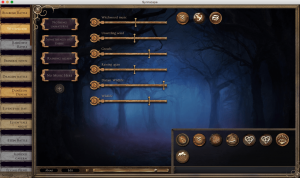 The idea being, as the battle progresses you start with “Battle Begins,” as the combat ebbs and flows you activate “Defeat is imminent” which ramps up the “sad noises” channel.

Or, to think of it another way, each sample is a channel and the elements are pre-set balance levels on your mix board.

The Syrinscape interface also includes a number of stock samples that are always available, such as a lighting bolt “zap!” or the clash of steel. The idea being that you can quickly key these background effects with a keystroke without having to predefine an element with those items. These presets can change with the SoundSet; “Dungeon Depths” includes a clever creaking door sample you can queue on command when you give an evocative description.

Now, perhaps you’re unsatisfied with the default elements; that’s not an issue as you can with one click create a new element and adjust which samples play in it and their individual balance level. So you could create a “Bugbear Battle” element that completely eschews the background music and leaves just the grunts and sounds of battle.

While on the topic of the player, I have to give props for it being very thematic: The background art and buttons are appropriate and feel less like a soulless application and more like an extension of your gaming space. The “Settings” button is a little hard to find and aside from clearing your cache, you can only set your speaker settings, going from mono up to 7.1 Surround Sound. I’m unsure what the multi-speaker options do, as there’s no way that I’ve seen in the interface to assign samples to individual speakersÂ – like, say, the dragon’s roar coming from the rear channels.

The player has OS X, Windows, iOS, and Android versions. A trial version exists with a sample SoundSet

The aforementioned SoundSets are sold individually or in SoundPacks. Each SoundSet averages about $4 USD and the packs vary from $16 to $20 USD. The $16 USD SoundPacks are actually Pathfinder Adventure Path SoundPacks, designed for “Rise of the Runelords.” (More on this later.)

At the time of this writing there are, by my count, 32 fantasy and 7 sci-fi SoundSets. Were you so inclined to purchase them all, that would set you back a cool $156 USD. To be fair, that’s a lotÂ of samples.

However, Syrinscape seems built to intentionally direct you towards a subscription model, currently priced at $6.50 USD a month (charged at $12.99 USD every 2 months). A subscription gets you access to the entire fantasy catalog–sans the Pathfinder SoundPacks–and every new SoundSet released. Where it gets perhaps a little confusing is that when you cancel your subscription you retain access to those SoundSets released while you were a subscriber. So if you subscribe today and cancel tomorrow, you only receive this month’s SoundSet. I posed the question to Benjamin Loomes, Creative Director at Syrinscape regarding the frequency of new additions to the catalog. He stated that they release a SoundPack of five SoundSets every two months in addition to another two SoundSets during that period. I will confess that in the period of time that I have been evaluating the product I have not been paying close attention to what releases have come out in that time to validate.

So, in general, a subscription today will have “paid” for itself within 24 months for access. However, upon cancellation, you lose access to those 32 fantasy packs. You would, however, retain access to the promised 7 SoundSets every two months, or, if they can keep up the pace, a total of 84 SoundSets. This seems…overly optimistic. They’ve published a schedule of 2015 releases here.

The Pathfinder SoundPacks are noteworthy as I adore the idea. Essentially, these sets are crafted for individual encounters within the Adventure Path. So the “Hook Mountain Massacre” SoundPack has sets for “Graul Farm,” “Fort Rannick,” “Down Comes Rain,” “Haunted Heart,” and “Hook Mountain.” Thus, if you are running this Adventure Path, a lot of the heavy lifting is already done for you!

So, how does it sound? In a word, excellent.

The sound sample quality and selection is quite impressive. Perhaps I went in a little jaded that it would just be a collection of open source sound samples but was pleasantly surprised. Each SoundSet varies in size, but most seem to be in the 20 to 30 MB range of size. It’s difficult to articulate, but the creaking door has character. The clash of swords sounds like they’re taken from the battlefield. The lazy wind and rainstorm that plays in the background fills the room with a chill and a sense of dampness.

Depending on what sets you have access to–remember, if you subscribe, you get the entire back catalog!–there’s likely something for everyone if you’re running a fantasy game. The sci-fi catalog is a bit sparse at this time, but again, the 2015 schedule looks to improve that considerably.

In my actual use of Syrinscape while running a game, the feedback I received was universally positive, although there was an issue with repetition that is mostly my fault, not Syrinscape’s. The particular adventure I was running had two fairly lengthy scenes in taverns where I utilized “Friendly Tavern” but didn’t do a good job of mixing it up. In one I should have had the minstrel not playing in the background and perhaps upped the volume on the crowd chatter on the busier inn. Thus, the complaint I received was that particular SoundSet felt somewhat repetitive.

And that, really, is the crux of the problem with Syrinscape: Like any tool you’ll only get out of it what you put into it. Which is to say, when you do your adventure design and craft scenes you need to also put in your workflow what sounds you need to prepare. It’s a concept that my brain wasn’t fully ready for. While I did prepare different SoundSets for different scenes, I didn’t customize them to really meet my needs. The case in point, using the two stock “Friendly Tavern” elements. I should have taken the time to create a “busy tavern” element with a lot of laughing and chatting and a second, more “sedate tavern” with the musicians playing lightly in the background and the crackling of the fire turned up. That would have made both inns–although utilizing the same SoundSet–feel entirely different.

If you embrace this concept then you may well get a lot of mileage out of Syrinscape, particularly if you leverage samples from different SoundSets. You can create your own SoundSets and cross pollinate samples from different sets into your own custom set. So you could have the fireplace from “Friendly Tavern” along with unsettling wind from “Witchwood” to have a campsite on a hilltop with a crackling fire while a strong, foreboding wind plays over the scene.

A new player including the ability to share user-created SoundSets is coming, according to Mr. Loomes. Should that pan out, the catalog of available sets could go up dramatically! Plus, you could leverage fellow GM’s and utilize their creations, simplifying your workload. In addition, a new feature to add reverb effects and also 3D positioning, presumably including the capability to focus specific samples at specific channels/speakers.

There’s no ETA for this new player but it is currently in beta.

Finally, I’d like to mention the iOS version that I tested. It was, frankly, disappointing. The largest issue being that the interface is a direct port from the desktop versions. It doesn’t utilize space well, and some items are absolutely tiny to select with your finger. Fortunately, you can use your Syrinscape account to download SoundSets on any client device, although elements you create on your desktop you will have to recreate on your mobile device. While I was able to get the Syrinscape client to output via AirPlay, the client stops playing if it loses focus. That is to say, you can’t use your iPad for anything else if you’re using it to drive Syrinscape. This relegates the iOS app to near useless status in my mind. It’s a minor nit, but a frustrating one.

In short, if you have the time to invest in maximizing the use of your Syrinscape investment I think you’ll be quite pleased. However, if you tend to improvise games often or are pressed for preparation time, you likely won’t get as much out of the tool as you otherwise could have. Also, the value proposition is pretty sketchy to me; I’d have to run a lot of games to recoup my investment in SoundSets or have a subscription that I’d have to remember to cancel when I wasn’t running a game.

But I’d be totally leading you astrayÂ if I didn’t tell you that I was typing this review with the crackling fire of the tavern and the gentle laughter of the patrons playing in the background. 🙂

This playtest review was completedÂ withÂ complimentaryÂ access to the Syrinscape catalog provided to Gnome Stew at no charge.

5 Responses to Calling Out: A Review of Syrinscape