If you were within shouting distance of my social circle, you would probably be well aware of the fact that I recently finished the Mass Effect trilogy of video games and was quite blown away by them. Mass Effect 3 came out in 2012, so I’m a little late to the party, but I still fell head over heels in love with everything about them, including the setting. Since I am a roleplayer by love and a GM by stubbornness, one of the first thoughts that went through my head was, “How can I bring this to the table as an RPG?” The second question that came into my head was far more important, though: “Will my players actually buy in to the idea and want to play it?” 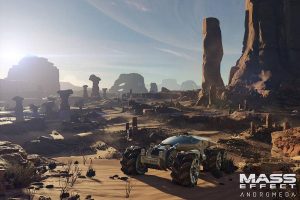 The next game is going to be so pretty…

The ‘how’ of bringing a canonical setting that doesn’t already have its own game to the table isn’t actually that hard. If a book, TVÂ show, movie, game, or whatever has even a hint of a fandom following it, there’sÂ likelyÂ a wiki out there dedicated to compiling all the information you could possibly need for reference. In addition, if you like it well enough to turn it into a game, there’s a good chance someone else had the same idea and may have shared their work. A quick Google search actually revealed several different Mass Effect RPG hacks.

A couple years ago, I marathoned a bunch of Warehouse 13 episodes and got an itch to run a game based on the show. I ended up running a one-shot at a couple of different conventions using Cubicle 7’s Doctor Who: Adventures in Time and Space. It worked surprisingly well and I got compliments from the players that signed up. Thing is, I couldn’t really interest my regular group into giving it a try. Too few of them had seen the show.

Unfortunately, the same thing happened when I polled the group about Mass Effect. Only one of the guys had played the series and had enough knowledge about the setting to get excited about the idea. A couple others had a general idea of what the video game was about (action RPG, space opera, saving the galaxy, etc.), but didn’t really know any of the specifics. Explaining the Krogan Rebellions would have been an uphill battle.

So, what do you do when you’ve got a specific canonical setting you really want to use in an RPG, but your players aren’t really buying in?

First, keep the gatekeepers out. One reason people will shy away fromÂ specificÂ settings they’re not familiar with is to avoid the jerks that lord their knowledge of the source material over everyone else. The arrogance of Comic Book Guy is funny because we’ve all known that guy at one point or another. Gatekeepers are a problem with many levels of nerd and gamer culture, but that doesn’t mean you have to allow it at your table. Don’t run the game if you’re going to get annoyed at every little inconsistency that happens between your game and the property, and gently but firmly shut down anyone at your table doing the same to the other players.

(As a side note, I was actually introduced to Supernatural by playing the RPGÂ well before I saw an episode of the show.)

Figure out what you really want out of the setting. Sometimes the essence of what you’re trying to get out of the setting can be found elsewhere. While I love Supernatural and it’s aÂ perfectly fine version of the original Cortex rules, too many of my players hadn’t seen it enough to be enthused about playing a game in the setting. I thenÂ discovered that Monster of the Week would give me the same gritty, ‘keeping the suburbs ignorant and safe’ feel that I wanted out of Supernatural, but without the pressure of it being an established setting. Distilling the essence of what you really want to run can also help you pitch the idea to the players if you’re determined to run that specific property.

Run it as a one-shot at a convention. If you’re pretty sure you can’t get your regular players to buy into the idea, you can still work the idea up into a game you can run at a convention. This will give you a chance to flesh out the ideas needed to bring it to a game table without the pressure of having to try and make it too generic for your players that don’t understand the tropes of the setting. You’re almost guaranteed to draw in a few players that love the property as much as you do and are really enthusiastic about playing. Running at cons is a good experience for GMs and it’ll let you satisfy an itch you may not be able to scratch with your regular group. 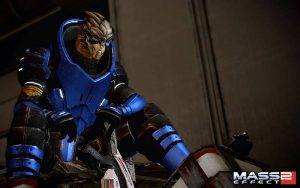 Yeah, my Shep romanced the one and only Turian bad boy.

I’m not sure if I’ll ever get around to running anything directly based on Mass Effect, but I’m going to be giving Uncharted Worlds a spin at a convention in April. Hopefully none of my players will be too mad at me if there ends up being a Turian, a Krogan, a Mass Relay, or even a space hamster in the game.

How about you? Have you ever tried to sell your players on a game in a canonical setting they weren’t familiar with?

11 Responses to Buying the Canon