One of the most iconic ceremonies is the wedding ceremony. In this article we’ll look at weddings throughout history and see how you can create weddings that reflect the traditions of your world– or even glance slantwise at our own. Along the way, I hope you find yourself incorporating a wedding into your upcoming games and worlds.

Weddings and marriage have consequences. Some researchers suggest that marriage came about when inheritance switched from a women’s children to a man’s. In matriarchal cultures (like amazons), marriage and weddings are less likely– because it’s completely obvious whose children they are. Once you switch to men holding the wealth and land, it becomes important to ensure which man a child belongs to. A good way of doing that is to swear a woman to one man– marriage, solemnized by a wedding.

Marriage was the only way a woman’s children could inherit any status– even if it is the mother’s land or title that the child stood to inherit. Children born outside of marriage often had an uphill battle for acceptance throughout their life: bastard remains an insult with power through the modern day.

I’ve been a part of several weddings, and while there are several differences in the ceremonies, there were a lot of commonalities too. For many people, their wedding is the biggest, most expensive party they’ll ever have to coordinate. It’s a stressful time for the bride, who feels responsible for everything– many go overboard, spawning bridezilla stories.

Depending on the exact year, weddings have different goals and consequences for the participants. Today, marriages are primarily for love, the match selected by the wife and groom– though sometimes it’s a consequence of youthful lust (shotgun wedding ahoy!) or meddling parents. As you travel further from America and further back in time, arranged marriages are more frequent, but love is still idealized.

Ironically, this era often involved more rights for women; for most classes business took the full efforts of both halves of the couple. In medieval Europe, other than Jews and the moors in Spain, religion was rarely an issue until the reformation. Arranged marriages were so common that courtly love and other romantic forms came into being to channel the passions that marriages weren’t designed for. 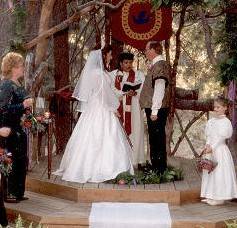 In a fantasy world, particularly with the pantheons common to many games, marriage can be tricky. Is it the purview of the goddess of nature and increase, for the children that marriage brings? Is marriage a sacrament of the god of civilization, for the alliances and blending of separate families into a greater whole? Or is it the goddess of love whose priestesses marry couples? Maybe it’s something stranger: what if your world’s marriages are presided over by the god of death? That gives “til death do you part” a different feel, no?

Marriage is a great opportunity to acknowledge several gods in one ceremony. While this is more common in history, it’s pretty unusual for most game worlds. Marriage could be a sacrament that all gods offer– which encourages you to consider the difference that comes from being married in the Sun God’s church versus the God of Strength’s shrine.

Worldbuilding, all wrapped up

Weddings and marriage fill useful roles in the real world: defining lineage, uniting enemies in peace, providing an opportunity to display wealth and style, or even advertising important skills. If you don’t have weddings and marriages in your world, what fills their roles? Is it all a matter of custom contracts?

If your world does have weddings, what are they like? Are they exactly like ours, or has the different history and setting altered what they are? Is the wedding a week long celebration, a ritual kidnapping and hiding of the bride for a month, or something else entirely?

Weddings are a great excuse to gather people together. An ally marrying an enemy is a great way to get the PCs in the same room as their foes– and on good behavior to prevent spoiling their ally’s big day.

The stress of preparing a wedding can explain a great deal of odd behavior from either half of the happy couple. The need to acquire money for an extravagant ceremony could spur a gentleman robber to activity, or turn a mild woman into a cunning bank robber.

Weddings can be a great time to show the differences in cultures; a Hindu wedding will be much more colorful affair than a Victorian styled white dress ceremony.

So, have you used a wedding in your game sessions? Was it everything you imagined: knights marrying their loves and beginning the next generation of the saga? Have you had a great wedding fight, with stray explosions spraying wedding cake over guests? Tell us about great wedding moments in your games in comments!