Building a Soundtrack for Your Game 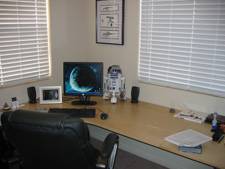 For the Burning Empires pitch session I’m running tonight, I tried something new: I put together a custom soundtrack. (That’s Treasure Tables HQ in the picture.)

I’ve used music in my games before, but in the past I’ve always just popped in an appropriate CD and let it run.

This time around, I pulled together a custom soundtrack from my iTunes library — which seemed like a much better approach. It was a lot like making mix tapes back in high school and college, except it was easier and I’m not angling for a date…

My process wasn’t revolutionary, but I figured I’d share it so that we could compare notes — maybe I missed something obvious, or tried a step you usually don’t take.

1. What kind of music? Reading over the scenario, I kept coming back to sinister electronica and ambient stuff. I sampled some, and it sounded about right.

Not having words in my background music is important to me — if someone’s singing in English, it’s too distracting (other languages are okay). My other goal was to have music that was evocative without being either too slow or too fast to match up with most scenes.

2. Throw everything into a playlist. After making a new playlist, I went through my library and just started tossing in tracks that felt right. I didn’t worry about order, or spend time vetting them. Soundtracks were my friend here, particularly video game soundtracks.

This got me thinking about other music that would fit, so I threw some Japanese vocals (and one song in Gaelic — I think) into the mix.

3. Start listening. After I’d made a first pass, I listened to the whole playlist while working on other stuff. This gave me ideas for more songs, and also eliminated a few.

4. Make a battle playlist. Battles need faster, more aggressive soundtracks than the rest of the session. I stuck with the same general theme, but chose songs that felt more action-y. I found that I didn’t have quite what I wanted on hand, so I bought a handful of battle tracks on iTunes.

5. Put the playlists in order. I listened to everything one more time (both playlists — and again, while doing other things), and put songs in order as I went. I also eliminated a few more that didn’t sound so good the second time around.

6. Final run-through. Lastly, I listened to both playlists for a third time — in order, in final draft format. I had about two hours for the main playlist and 30 minutes for the battle playlist, which felt about right.

The battle music will probably get us through one conflict (and is versatile enough to use twice), while the main soundtrack will likely loop once in a four-hour session. My hope is that hearing tracks twice will tie them more closely to the game, just like the opening music for a TV show.

And that was it! Like I said, not revolutionary, but I found it to be a lot of fun. I think it’ll turn out to be worthwhile prep — I’ll let you know how it turns out.

19 Responses to Building a Soundtrack for Your Game