Today’s guest article was written by Tom Puketza, and it’s about a topic that has always seemed to be of special interest to Gnome Stew readers: sandbox-style gaming. Tom’s approach is an excellent one, and I think you’ll like it. Thanks, Tom!

Previous articles have offered great advice on building campaigns using the five Ws. This approach offers a different but equally rewarding method for building a campaign. I used this method to build the D&D 3.5e campaign I currently run, and the results have been excellent.

The goal of this approach is to create a detail rich world that writes its own adventures. In the past, I would write adventures the way one writes a screenplay for a movie or TV show. There is a reason why TV shows are written by teams of writers. After weeks of being an actual one-man show, your brain doesn’t explode so much as deflate, complete with that farting balloon noise. The burnout happens because you’re both drawing from the well too often and working inefficiently. Games and campaigns are living, breathing things. Don’t write them like you’re writing a script. Let them unfold. Here’s how.

The metaphor most gamers like to use is a sandbox, which works from a player point of view. But from a design standpoint, its much more like a petri dish: a controlled environment that contains multiple reactive agents. You’re not writing using plot hooks and inciting incidents, you’re creating a living, moving, always-evolving place. This may sound redonkulous hard, but its actually surprisingly easy. All campaigns involve a bit of worldbuilding. With this approach, adventure writing and worldbuilding become the same thing. All you have to do is observe the petri dish.

A good backstory sets the tone for the game. It establishes tone, atmosphere, all the major players, and all the main conflicts. It’s also all the stuff that sells a player on playing the game.

In my 3.5 campaign, colonial city states representing two competing empires have lost contact with the mainland. The local area is resource rich, but also full of local tribes, humanoid threats, and various dangers. To top it off, an unknown threat is pushing the humanoid populations out of the mountains, adding pressure to everyone. 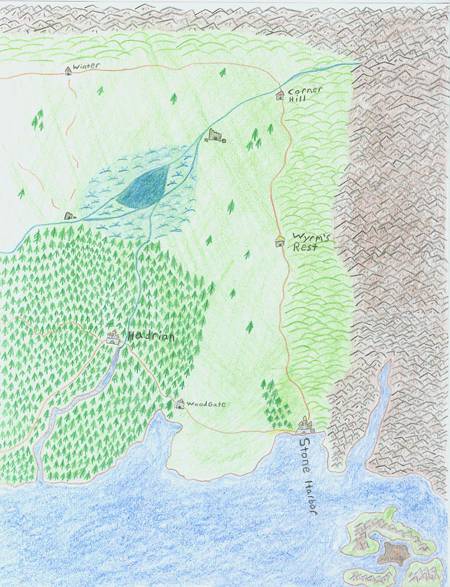 Maps are the primary way players transport themselves into the campaign world. Plus, they’re fun to make and look at, and they inspire curiosity. For you, it sets your stage and gives your factions a place to live.

I made my overland map by hand using colored pencils. It contains two countries with five city states each, plus elven, dwarf, and gnome communities. I then peppered it with ruins, adventure seeds, and resources. My maps are not even close to the quality often seen on the web, but my players still love them, and they’re used constantly.

There are a number of resources on the web for building good world and city maps. Software is available in various places, but I frankly don’t have the patience for any of them. I often visit The Cartographer’s Guild for ideas and advice.

3. Let the maps tell a story

At this point, for me, the maps begin creating adventure ideas for me. Ruins, resources, and features all provide goals, maguffins, set pieces, and motivations for PCs and NPCs alike. Place the key factions from your backstory and all the primary building blocks for adventures fall into place. A rich mine may be coveted by two or more opposing factions. Remote sections of trade routes lend themselves to danger from bandits. The location of a hidden base, castle, or fort instantly reveals its sphere of influence. All of these details naturally interact with each other, removing the need to constantly pull plot hooks and seeds from the aether. Need an idea for an adventure? Look at your map!

Looking at my map, one city stood out as a ripe target for a large but desperate goblinoid army to lay siege. This gave me a solid basic premise. The real fun came when I zoomed in a bit. 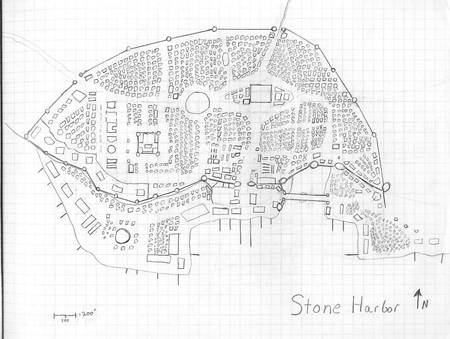 The large national view filled in all the info on the basic forces in conflict. Local views provide the backdrops, factions, and cast of characters. They also provide more geographic details. Functionally, you’re repeating steps: backstory, map, look for story seeds. This works best if the global issues influence the local ones. This kind of thing accumulates and pays off like compound interest. These elements add that extra layer of intrigue, twists, and mystery without you ever having to specifically create them.

Having a city under siege meant I had to develop that city, the area around it, and the people living in it. This took the basic premise (goblinoids at the gate) and made it exponentially more complex. The city, having fallen into corruption, is both partly to blame and in the middle of a thieves guild war. Both sides are now using the conflict to jockey for position and take control of the city government. The PCs get hired to defend a city and find themselves embroiled in a mob war. On top of that, they can also discover the unsettling truth motivating the goblin army, all without any effort or planning put into delivering this information. It’s just there, operating on its own, waiting for players to find it or pass it by.

Remember, you’re not trying to be Google Game Maps here. You don’t need postal codes and individual house numbers. Just make sure you have usable material on all the major players.

5. Prep environments and choices, not scenes

A petri dish campaign involves a lot of initial development, followed by shockingly little work beyond looking at what the PCs have done, figuring out how the various NPCs would react, and winging it from there. It may be tempting to step on the crazygonuts and write an encyclopedia for your world. You certainly can. But you can do it at your own pace, and you don’t really have to do it any more than a game or two ahead of the players. At least, this is what I prefer, because I find the players really influence the game. So much so, in fact, that I often tweak adventures based on the previous game’s events. I know its going well when I get that groovin’ going with the flow playing jazz kind of feeling.

A key to this approach is setting a stage without writing the scene. Equally important is the removal of all “story logic.” In other words, let nothing hinge on a certain outcome. There are no “scenes” in a petri dish game, only situations, actions, and consequences. As a result, the prep work is now focused on NPCs and their motivations, maps for important locations or fights, clues and loot to leave at said locations, bookkeeping for loot and clues, and coming up with cool places to run a combat.

When running a petri dish game, move your various timelines and events forward while constantly rolling with the players’ punches. It is OK if they do things faster than you think. Other, often sillier things will stump them. So let them kill the key villain trying to escape. Let it ruin the best-laid plans. They’re heroes; that’s the point. Now your villains have a score to settle, so get to work thinking of cool ways to strike back. And that bad-ass you so lovingly statted up (and who died so, so horribly) can be re-skinned and put right back into play while you’re at it.

The biggest, most delightful irony is that choice and detail creates an immersive experience, and leaving things to be discovered at the group’s pace creates more dramatic and cinematic moments than anything I could have created on my own.

Now if you’ll excuse me, I’m going to artificially create closure by referring to something I wrote in the beginning:

The circle now complete, my work here is done. Happy gaming everyone!