Whew, baby. Let me tell you about this game I backed on Kickstarter known as Broken Age, formerly known as DoubleFine Adventure. We know this Kickstarter project was a Big Dang Deal from the day it was funded above and beyond imagination (over 3 million is a lot of dough) to the days leading up to the release. There was drama surrounding issues with the game’s funding, particularly in 2013, but sure enough… slowly but surely… Act One was finally released January 28, 2014.

Here’s what I loved about Broken Age Act One, and here’s what I didn’t love quite so much. Be warned, there be spoilers after this point.

It’s probably best to get the nitpicking and whining out of the way first and end on the good notes. First off, my biggest problem with Broken Age is simply the fact that it kept friggin’ crashing all the time. As a Backer, I had access to the beta, but surprise, the beta kept crashing after the initial DoubleFine opening animation. 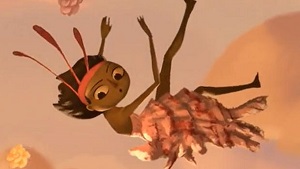 This happened over and over despite updating Steam and my driver software, despite verifying the game cache, restarting, turning firewall on and off, uninstall/reinstall, etc. Didn’t actually get to do the beta during beta time.

And then, as if by magic, when the official release date hit? Bam! Suddenly, the game WORKS. Why? How? What?

Don’t Worry About It

Good things, however, never last. Just when I thought I was in the clear and all of Act One’s glory would be mine to enjoy, it started flipping out on me. Nothing like making it to the first encounter with Mog Chothra and then the game just quits on you. No matter what I did (or didn’t do) to try to fix it, it didn’t seem to matter. The game would just flake out on me nilly-willy. 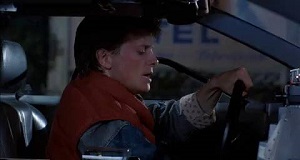 Now I know how this guy felt when that dang DeLorean wouldn’t cooperate. Maybe if I just BANG MY HEAD INTO THE KEYBOARD? LOL

Some days I could play anywhere between, oh, 5-30 minutes before it peace’d out on me, but other times I couldn’t even get past the opening animation and title menu. Grr! Frustrating.

That’s really just my biggest issue with this game if you don’t count my impatience for Act Two. Seriously, GIVE ME ACT TWO NOW.

Man, things I loved about this game. Love the art. Love the music. The voice acting, of course, is a talented cast. Obviously, I have to give props to Elijah Wood, Jack Black, Wil Wheaton, Masasa Moyo, Pendleton Ward, etc– but HOLY COW was I happy to hear RICHARD STEVEN HORVITZ as Walt’r and Space Weaver. That guy is AWESOME! Thanks to a friend from UBCon (thanks again, Cory), I was able to talk to Richard Horvitz on the phone once. He was really cool and didn’t seem to mind that I was most likely making an idiot of myself on the phone. It was a fangirl moment, and there was such an effort to be a high-functioning conversational fangirl. Still asked him to do quotes in funny voices. 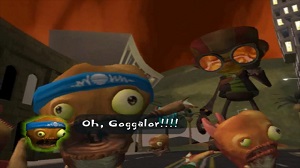 Why couldn’t Raz just be Mog Chothra? He made a GREAT Goggalor!

Even though the puzzles weren’t really so challenging (exception– putting the over-sized cloud shoes… on the ladder?), the game’s real strength lies in the narrative. Act One may be short, but it seems like it is a good set up for what’s to come (hopefully).

Let’s start with Vella’s side of the story so far. My first perception of Sugar Bunting– a picturesque, dream-like, fairy tale little place. Everyone appears to be excited about this Maiden’s Feast…except for Vella. It couldn’t be such a bad thing, could it? At first glance, the idea of a Maiden’s Feast sounds lovely. It sounds like a day to celebrate young women who come of age or exceptional young women in their town. The Maiden’s Feast in the game also recalled a memory of a blog article I once read about Native American maiden’s feasts because hey, I took Native American Lit once upon a time and it made a lasting impression. The text referenced in the blog, Indian Boyhood by Charles Eastman, can be read over here on the internet for free. Thinking on this, I wondered if Broken Age would treat their Maiden’s Feast with similar reverence. Would Sugar Bunting’s Maiden’s Feast focus on the virtue of the maidens? Would they face challenges to their honor? The characters in Sugar Bunting (and in all the towns, really) do look upon their Maiden’s Feasts with reverence and an air of sacred tradition, but this reverence is made perverse by the fact that it is a LITERAL feast of maidens for the monster, Mog Chothra. It is considered “heroic” to be a willing sacrificial lamb to the slaughter with no backbone, and Vella (to the delight of her Grandpa Beastender and to the horror of everyone else) will have no part in that. I saw a parallel between Vella and the woman in Eastman’s story who stood up to the Sioux man who tried to lie about her purity. They both display power and intelligence. Vella goes a step further by denying an obviously silly but deeply respected tradition that is considered normal by her whole society. She also reverses the trope of the lady in distress in need of rescue. She rescues herself, and her goal is simple. Kill Mog Chothra. Once you get past the sugar coating, it is clear that Vella lives in a world full of dangers and people living with absurd beliefs and delusions. And people who would seek to take advantages of other people’s absurd beliefs and delusions. Like these guys– 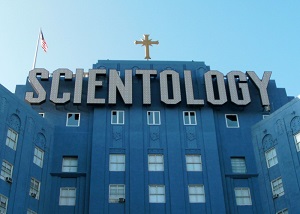 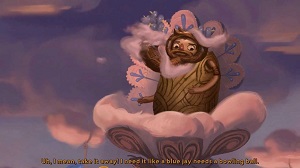 Yes… unload all of those worldly possessions and wealth. You don’t need them. You need to be lighter… let me brainwash you like Walt’r and F’ther.
ALSO. NEVER LEAVE ME. EVER.

And the jokes. Love the jokes. I’m still chuckling over Curtis and his stool. It was a fair bit of set up for that one though. I mean, okay. Obvious hipster. Kinda pretentious (You know, like that whole big paragraph I just wrote about the Maiden’s Feast. Laugh with me.) Lumberjack obsessed with making stools. I kept thinking, “Man. What is it with this guy and wanting to make a stool so bad?” Once you get that driftwood (SO SMOOTH) though, it became hilarious. HEY THAT WAS A GOOD STOOL, SO SMOOTH, THANKS FOR HELPING ME GET THAT OUT OF MY SYSTEM. 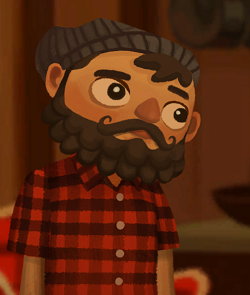 Your existence in this game is one incredible poop joke, and it was fantastic.

Despite the fact that Richard Horvitz was my favorite voice actor in this game, Curtis was one of my favorite characters. Just. For. That. Moment.

On Shay’s side, there is a very noticeable lack of adventure and danger compared to Vella. There’s a mostly absent father-computer in a spaceship, and there’s a super over-protective micromanaging mother computer. Her attention to Shay is simultaneously obsessively creepy and almost sweet. It’s clear her function is to protect Shay at all costs, but it is also clear that Shay doesn’t fit into Baby’s First Spaceship any more than he fits into his first radiation suit (exception– the baby helmet after enough ridiculous head mutations from the teleporter). While Vella breaks her family’s hopes and expectations by challenging tradition head-on, Shay represents a different kind of family struggle. A parent can shield their child from the dangers, disappointments and heartache of the world for so long before that child starts pushing the boundaries of the parent/child relationship. The child discovers the world. The child seeks independence. No matter how sheltered, that child is going to find trouble. The computer may or may not have feelings, but it definitely represents the feelings of an actual parent. It wants to be called “Mom.” It wants to be recognized as a loving figure that cares and will do anything for its child. It wants to keep Shay safe and happy, but– and this is the nightmare of parents– it fails at both. Shay’s life in the spaceship is monotonous and unhappy. The ship’s simulation missions do nothing to teach Shay how to become a self-sufficient, well-adjusted adult because the computer wants to do EVERYTHING for him. Because the computer teaches him basically nothing, he gets by on whatever cleverness he simply has naturally or has developed by constantly trying to trick the computer. When he meets Marek and manages to crash the ship, he is thrust into Vella’s world while she is thrown into his. Vella’s tasted real danger, but Shay– up to this point– has only been playing games. I wonder what he’ll do in Vella’s world. Let’s hope that cleverness takes him further. It probably will. He kinda pulled a MacGyver using that Whipped Cream Gun as propulsion in space, but on the other hand, it wasn’t that original.

Act One, though short, was solid. I think it will be a great start for Act Two, and I hope that is longer and picks up more steam. Can’t wait to see what happens next!

Until next time, folks!