Bringing Out the Good China

The other day, I saw this show up in my Facebook feed: 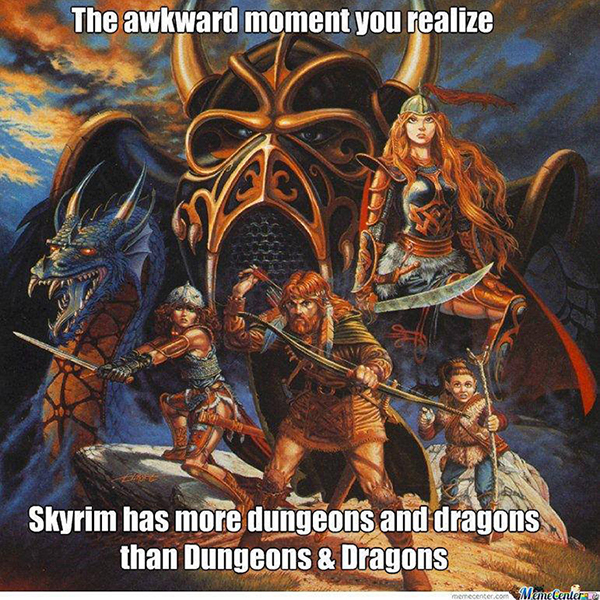 With all the meme pictures flooding my Facebook feed, I’m surprised I actually noticed this one.

My first thought was, “Whoa. The proportions in that painting are all so whackass. Is that an Elmore? Elmore’s art is usually better than that.” Then what the meme was saying actually registered and I thought, “Huh. That’s kinda true. At least, I’ve fought more dragons in video games than I ever have in Dungeons & DRAGONS.”

There are plenty of dungeons in D&D (I’ve even played campaigns where we never left the dungeon), but I’ve been playing roleplaying games for about twenty-five years and I can count on one hand the number of times I’ve had a character go up against a dragon or even had a dragon show up in a game. Half of those were one-shots. Video games clearly win. Digitally, I have fought hundreds of dragons. Everquest counts for most of those numbers, thanks to being a member in a high end raiding guild during the Scars of Velious expansion. For those that missed those glorious, Ever-Crack days, that means many nights attempting to, and eventually succeeding at clearing the Temple of Veeshan’s North Wing, which was loaded to the gills with named dragons. Add three complete play-throughs of Dragon Age: Origins and one of Dragon Age II, and those numbers get even bigger. I’ve never even played Skyrim and I can still say video games easily beat out pen and paper games when it comes to dragons.

Why are we so much more likely to face dragons in video games than in the pen and paper game that advertises them in its title? I chalk it up to the ‘good china’ effect. Like the good china that you got as a wedding present or was handed down through the family, dragons are intended for special occasions. The nice dinnerware is pulled out for holidays and fancy events that are planned long in advance. The general feeling I’ve gotten from most gamers and GMs is that coming face to face with a dragon should be epic. It should mean something! Just like pulling out the good china. You don’t pull out the good china for leftovers and you don’t pull out a dragon just because you’re bored.

Unfortunately, this too often means that you never get to the special occasion where that dragons shows up. Other games and settings have similar issues, but none are quite as obvious as the missing dragons in D&D. I’ve played plenty of games where something epic is hinted at throughout the game, but it’s very rare that I’ve ever played in a game that actually reached that epic plot point. Too many games fade away without getting finished (which could be another article topic). For whatever reason, some understandable, some silly, games end before reaching the full conclusion that the GM may have envisioned or wanted. It may not have been a literal dragon showing up for the players to defeat, but there always seems to be something major the players never got to see.

This issue isn’t quite as bad in one-shots – games meant to be played and concluded in one night, not games that you just play once and then never pick up again. This probably explains why most of the dragons I’ve encountered in my gaming career have appeared during one-shots. Since your time is limited, the pacing is important and most good GMs know how to work in the important things they want to throw at you. Like a dragon. In a one-shot, if the GM wanted to throw a dragon at you, more than likely you’re going to see that dragon.

Campaigns have the luxury of more time, but that leads to more chances that you won’t actually get to play the game’s story through to completion. GMs want to save the most awesome, epic bits until the climax at the very end, but that ends up meaning the dragon’s sitting out there in her lair, tapping her claws, just waiting for someone to show up and try and take her shiny loot. 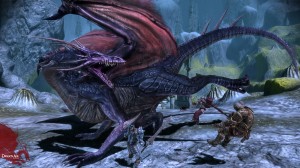 This isn’t the archdemon, but it is a dragon that kicked my ass. I only beat this dragon in one of my play-throughs.

Even if a video game has fifty-plus hours of play-time built into it, it’s crafted more like a one-shot than a campaign. The creators of the game already built the epic finale on top of Denerim’s highest tower into the code. If you as a player don’t get to it, it’s your own damn fault, not lack of energy or enthusiasm on the part of the GM.

As a GM, it’s tough, but important, to learn how to keep a balance between keeping epic things special and making sure they’re not just gathering dust in our virtual gaming cabinet because we never actually get to them. Good games have an abundance of awesome throughout every session, not just in climactic finales. It’s also important to note that most modern versions of D&D (3.5, 4.0, and Pathfinder) have dragons set up at a variety of challenge levels, meaning you can bring them into the game well before any epic level end-games.

Now, if you’ll excuse me, I’ve got to go stat out some dragon-related encounters for my Eberron game. My players are currently trekking across Argonnessen, after all.

4 Responses to Bringing Out the Good China