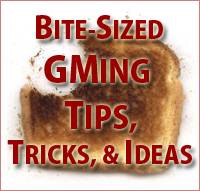 Welcome to the first digest of Gnome Stew’s bite-sized game mastering tips, all of which were originally posted on Twitter (@gnomestew) from June 23 to July 12, 2009.

We archive our GMing tweets in this article series, making them searchable and collecting them for readers who don’t use Twitter. Bite-sized tips can be a great source of inspiration, and can help keep you sharp and on your game — we hope you enjoy them.

If you’re on Twitter, follow us to get tips throughout the week, and to chat with us about GMing. (We sign off with our initials so that you’ll know who’s who.)

How this all got started…

Back in June, we decided to start posting bite-sized game mastering tips and ideas on Twitter (@gnomestew). It’s been a blast so far.

We got the idea from Mike Shea of Sly Flourish (@slyflourish), who tweets daily D&D tips and archives them on his blog. Both his tweets and his blog are excellent.

That sounded like fun, and seemed like it’d be a good way to post tips that don’t necessarily require a whole article — and to connect with our readers. Thanks for the inspiration, Mike!

The one area where Twitter really falls down is in preserving tweets in a searchable, easy-to-access manner. That’s where this series of articles come in. From time to time, we’ll archive all of our GMing tweets (but not one-off responses, status updates, and the like) in this format.

Anyone create an ogre fig that didn’t need pinning? The rigors of GM prep. The joy comes at the table. Drop that fig, watch ’em scream. —TT

If you need good generic minis to represent mooks, go to your local hardware store. Nuts, bolts and washers are cheap and look cool.-JA

Keep your GMing skills sharp. Plan on one scene per session that you will improvise. It adds a little chaos and develops your wits. – P.B.

Common refrain: No one wants to play a cleric. Yet, I think a party made entirely of clerics would be an awesome force. Gods help us. TT

GMing, via Penny Arcade’s Tycho: “embroidering every act in an effort to simulate their worthy band at the highest possible resolution.” -MR

Last minute scramble to reschedule the game? Don’t rely on email and the web. Pick up the phone and talk to each player to confirm! – P.B.

Nothing like defeating a boss monster, finding that enormous treasure pile, and not having a single sack to carry the loot home in. TT

How come no one celebrates when the GM rolls to crit or confirms a crit? It’s lonely behind the screen. TT
(TT: The key is the type of RPG. In Burning Wheel, I’d definitely celebrate my GM’s crit (equivalent). In D&D, it’d be more grudging. -MR)

Have your power gamer player help the others, @Jorgon3d. Some power gamers love to spread the wealth. -MR

D&D: Pick the 10 monsters you think are the most stupid, and base a campaign on them. I want to try this. -MR
(MR: Well, that would be just about every plant monster in the book. It would be the first campaign broadcast on HGTV. TT)

GenCon Tip: Bring a water bottle. Buying water or soda is very expensive. There are free water fountains all around. Stay hydrated. -DNA

Do have an adventure, and pick the minis for it? Or do you run a session with the minis you have? Or, are minis not an issue? TT
(TT: I’m a big fan of proxying minis and making due. I’ve never altered my plans due to the minis on hand. -SM)
(TT: I tend to GM games that don’t need minis (last: Mage:TA), but when it comes up I put game first, minis second (and use counters). -MR)
(TT: I just use whatever minis most fit my adventure. I will take inspiration from minis, or include enemies based on new ones I get. -JA)

Re: Giant Space Flea from Nowhere, http://bit.ly/ffuXA @cynicaloctopus Sharp! That’s actually something to watch out for as a GM, too. -MR

Which NPC is your favorite to throw into the mix? A trouble-maker or a helper? (I lean to trouble-maker, myself). TT
(TT: I like the helper. My BBEG usually has one or two lieutenants of note that act as troublemakers for the group. -JA)

Bone up on the rules. Pick a brief section of your favorite rpg rulebook, and review it. The refresher will pay off at the table. TT

At conventions, play as many games that are different from your usual style as you can, stretch your boundaries and meet new people. -JA
(JA: I’ll second that. I shoot for 75% new games every year at GenCon — it’s a great way to learn what you like and find new favorites. -MR)

Sometimes that surprise round can determine the course of an an entire combat encounter. Be wary. TT

One of the coolest modern horror-tinged plots I’ve ever heard, perfect for an adventure/campaign: the NYNEX angel. http://bit.ly/JNs57 -MR

Advice for convention GMs: take care of your voice. You will be louder for a con game due to noise. Have water, rest your voice. – PB

This struck me odd: As DMs we spend hours designing monsters and NPCs that the PCs kill quickly. A cosmic imbalance, to be sure. –TT

Is it possible to embrace the major themes of Old School Gaming (http://tinyurl.com/ccgbud) with out playing an ‘Old School’ game? –DNA

When starting a new campaign, take the extra effort, and audit all the character sheets. Often times players will make small mistakes. -DNA

If you ran a great combat, your players will be both exhausted and exhilarated (and optionally: the PCs almost lost). Aim for that. -MR

Sometimes the best feedback about your game comes from your quietest players. The trick is getting them to share: don’t push too hard. -MR

The best way to get a feel for a new RPG (and whether you and your players will like it) is to look at a character sheet. -MR

If you want to learn the rules to a new game, make your own GM’s screen. -DNA