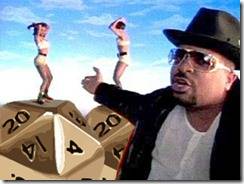 I like big dice and I cannot lie
You other GMs can’t deny
That when an attack rolls up at a critical place,
And that 20’s in their face,
You get sprung…

With my most sincere apologies to Sir Mix-A-Lot, I like big dice when I’m GMing. No, not the monster ones that should sit on a shelf, but the 28mm “Jumbo” size. No, they don’t fit in most dice towers, nor do they transport as easily as their smaller brethren, nor do they come in all the latest styles and colors.

But big dice can be read from a distance. Since I GM in the open, this is a pretty big deal for me. I’ve found that when it all boils down to the dice (and really, isn’t that one of the high points of the game?) the focus is on the die, and not on the GM. Bigger dice make the game feel bigger.

Also, big dice are intimidating, both in the noise they make and the sheer size compared to regular dice. I referred to my first set of large dice as “The Black Dice of Death”. They weren’t high rollers or anything, it was just a cool name. But when I would be having a bad night, I’d merely threaten to pull out the BDoDs, and the players would almost flinch.

Finally, big dice support open die rolls, which was my intention all along. I want my players to know that I’m not going to lie to them or hide the dice. I want them to see that — yes — there is some real risk to this game, and I’m not going to pull any punches.

An unexpected benefit is that two of my players can add faster than I can even recognize the numbers on the dice. Big dice let them do my math for me.

What about you, do have a preference for certain size dice? Hate the big dice? Love ‘em? Sound off in the comments and let us know!