Back in the Saddle (I own dice older than you!) 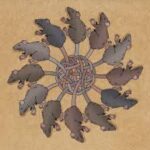 Today’s guest article by Gnome Stew reader Nick M. is a reflection on returning to gaming, including some tips for lapsed gamers coming back into the fold. It’s a bit different from our usual fare, and hopefully you’ll enjoy the change of pace. Thanks, Nick! –Martin

So, life eh? Gets in the way sometimes and, like many a gamer, I have had a break from roleplaying for a while. Sure I would meet up with the guys and have a one-off game, but to be honest it was mostly beer and bad jokes — great fun, but not great gaming.

There was a time 5 years ago where I found another couple of gamers and we would meet up after work, but the travel distance was crippling, and the gaming was pretty “meh” (several games started, but never finished or taken forward in interesting ways). It didn’t last long. So 10years drifted by without a regular game. Until finally, at last, got back into gaming again. I found the time… No that’s not right, we made the time to go gaming.

The time to play had to be clawed back from normal life with the help of my ever loving wife, who realised I was going slowly mad from a lack of outside social interactions, and lack of a creative outlet. We both came to the realisation that agreed, reciprocal, “time off” from family life had to be prioritised again. Even a few hours each week is important, and we both lost sight of that for a while what with babies, jobs and all the rest of it.

A quick search showed I had a gaming society nearby. If you’re looking for a game check out the universities and colleges, most have a games society -— even if you’re not a student they will still usually welcome you.

So I got to meet the new breed of table top RPGer, some of whom were not that new, and had been gaming for years, had left university, and were still playing at their old gaming club. I can’t stress enough how lucky I was to meet a group of gamers who actively campaign to break up the cliques that can cripple a game club sometimes. I, and all the other new members were not only welcomed to games, games were set up specifically for new players, and new players got first pick of any available spaces in existing games. I can honestly say this was a first; a massive improvement on my previous experience of gaming clubs back in the late ’80s and ’90s, and I can see how that has translated into a vibrant and stable gamming club here in Loughborough (UK).

So our first game was an over the top, played for laughs D&D 3.5(ish) game. I think there may be two of us new players who were in that game that are still in the club, but I can say that every one enjoyed the game, as we had an audience that seemed to laugh at least as hard as those of us playing it. From there I was welcomed into a slightly (but not much) more straight super villains game. Once again as a new comer to the club I suspect I got a seat at the table as a priority.

If you take only one thing away from this article, let it be that. Make room for the new guys, and be willing to sacrifice your regular gaming buddies to do so.

So here I am, welcomed back in to the gaming fold, and its almost like nothing has changed, except of course everything has changed. The game starts, I rifle through my dice bag and spot, lurking in the bottom, a dishevelled looking blue d20 I got in my D&D boxed set all those years ago. Some of you may recall them, you had to colour in the voided number spaces with a wax crayon to make them readable.

I glance up and see everyone else at the table, two of them sporting fox ears and flying goggles; all of them using their mobile phones to roll dice, post on Facebook and watch YouTube videos of “Baby-Metal” (everything I love and hate in one macabre, sugar coated package!).

I sat there looking at that die, and realised that it and I were older than many if not all of the people here at the table playing this game. I could let myself get annoyed at the constant distraction of the phones, and the references I didn’t get, or I could choose to accept that the games I loved are still alive and well and a new set of gamers are doing their own thing with them. So I put that battered old d20 back in the dice bag, and sat back and enjoyed the show.

What a hoot. I can’t recall the last time I enjoyed playing a character as much as that brutally dumb supers character.

And here I am in the saddle again, running my favourite systems for these good people (King Arthur Pendragon has been a resounding success, as has the Marvel Super Heroes RPG). Now I find myself scouring the online RPG shop for the first time in a decade looking for my next purchase, and the “RPG student nationals” (which the Loughborough team have introduced me to) are a hunting ground for new game systems as well.

Next week we have a new intake of players just starting university and gaming, and I hope to attract at least one or two of them to my ongoing games.

And do you know what? The players from last semester know that our existing campaign wont re-start until our fresh faces at the gaming society have had a chance to bag a seat at the table.

9 Responses to Back in the Saddle (I own dice older than you!)