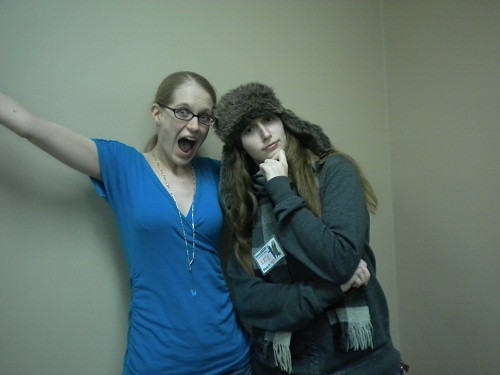 Hello, good readers. It has been a long time since I, Margaret, have posted something in the blog. It has been a busy time for me as I have begun a career (like a real person?!), adopted a new cat (Ms. Meowgi), and made a fresh start on a new relationship (don’t worry, he’s nerdy). However, I will not keep you lovely people waiting any longer because I present to you my exclusive on Awkward Zombie’s very own Katie Tiedrich’s visit (and Norrin’s) to Running GAGG 2013: A Con You Can’t Refuse!

If any of you are familiar with Katie’s comics, take a moment to recall the two hats Katie usually wears when she draws herself in her comics; she really does only have two hats, and she wore that winter one to the con. Katie was properly equipped for the cold Geneseo weather, and her table in the student union ballroom was decked out in eye-catching yellow and located right next to the SimCon booth. The student union is the hub of all of the con action, so Katie and Norrin, who has influenced a number of Katie’s comics, were definitely in the right spot. The Awkward Zombie table boasted a variety of souvenirs on sale including Metroid, Zelda, and Pokemon posters, t-shirts, buttons, and the first volume of Awkward Zombie—a project funded through Kickstarter in the Spring of 2012.

I spoke briefly with Katie, and she told me to spread the word about the panel she was hosting on that Saturday, February the 9th. The panel—all about drawing comics—attracted a modest crowd; Katie said she was inspired to do this sort of instructional panel because people have asked her for advice on how to do comics in the past. The panel discussed things such as perspective, readability, where text bubbles should go, and how to trick the reader (comic artists are WIZARDS). She also made a point to say that once you know the rules, feel free to break them. Well spoken. Afterward, she did a Q&A, and then I visited her and Norrin at her booth in the union to see if she wanted to be featured on Rogue Princess Squadron. She said yes! Hooray! 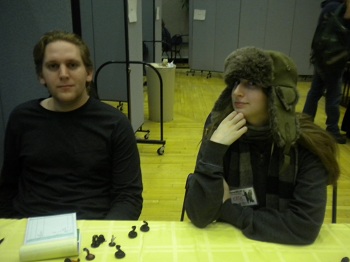 Katie said she got her start writing Awkward Zombie on Deviantart, inspired by her interest in Legend of Zelda: Ocarina of Time and Super Smash Bros. Melee. She liked those games so much that she created her own scenarios (and personalities) for Link, Marth, Roy, and many other characters, and then she found herself branching out more and more. She remained on DA for a couple of years, but someone on a gaming blog mentioned that they would rather read a webcomic on a website rather than on DA. This influenced her to start her own website at awkwardzombie.com. In her words, she said that it is great to have people continuously influencing her because it’s hard to get started and, with the Internet, it’s easier because it allows more direct contact and criticism from fans.

When I asked her and Norrin how they made it to Running GAGG, Katie explained that because other webcomic artists have been to GAGG in the past (including Dr. McNinja, Dinosaur Comics, and A Softer World) they were also recommended to this con. Awkward Zombie was certainly a welcome addition to the con this year, and Katie also participated in our Annual Charity Auction by donating some of her merchandise—a book from her Kickstarter and a set of posters.

Following the interview was a discussion of Ocarina of Time Master Quest and a short ocarina jam fest.