At the (Nibel) Mountains of Madness

A Quickie Intro to Horror and Stuff

Alright, let me first put this out there and state that I am by no means an expert in horror literature. However, I do consider myself somewhat of an expert in Final Fantasy VII, and I do reserve a special enthusiasm for Lovecraft as well as Robert Chambers—The King in Yellow.

So let’s talk about horror. This is going to be a very rough, very generalized summary of horror. Basically, if it’s horror, it is gonna find a way to make use of fear in some capacity. There are lots of ways to generate and instill fear. A reliance on violence, monsters, and startling tactics provoke, at best, superficial knee-jerk reactions and perhaps a queasy feeling. Intimidating looking monsters and the startling intrusion of a random battle in the game do not reach the level of fear we’re looking for, but it does remind the player that they are constantly fighting to survive.

How does this game enter into the realms of horror, of the fantastic? Apply the psychological fear of our darker natures, appeal to the unknown, use suspense. In Dracula, it’s not enough that vampires exist; the real threat is the possibility of becoming a monster. No one is exempt from this. Poe liked to scare people by reminding them of exactly how little human beings know, and Lovecraft put his protagonists into positions where they discover too much, utilizing suspense to maximize the impact of their discoveries and how those discoveries—knowledge beyond the scope of human comprehension, contact with the horrors of the unknown, ultimate cosmic terrors eating away at the fabric of the universe and reality itself as we know it—effectively drive characters into madness and despair.

Furthermore, Lovecraft liked to drive the impact of terror deeper into the reader by juxtaposing human reason/progress, our familiar and comforting landscapes, reality as we know it… against the depths of the unknown, the dreamscapes, the horrors that lie beneath the surface, the impossible rearing its ugly head to contradict everything we know as real… In short, he really likes measuring the weird/fantastic/fear by the divide between reality and human reason versus the horrible unknown and madness. Reality becomes the dream; dream becomes the reality.

Lovecraft’s work also makes one ponder the question of whether or not we’re alone in the universe. It comes to no surprise that Lovecraft is often fixated on the stars and what may come from them—he did publish articles in local papers on astronomy by the age of sixteen (Levy, 19). His breed of story makes one consider this: would it be more terrifying to be alone in the vast universe, or would it give us more fear than comfort to know that we are not alone in the universe? That possibility is the root of his cosmic, supernatural horrors. One could argue it is the first unspoken question of the game– our first screenshot is of the stars, as if the camera is looking for something– Are we alone? According to Lovecraft in his letter, “Supernatural Horror in Literature,” he stated that the “one test of the really weird is simply this—whether or not there be excited in the reader a profound sense of dread, and of contact with unknown spheres and powers; a subtle attitude of awed listening, as if for the beating of black wings or the scratching of outside shapes and entities on the known universe’s utmost rim. And of course, the more completely and unifiedly a story conveys this atmosphere, the better it is as a work of art in the given medium” (HPL, link here).

Final Fantasy VII shapes fear in a lot of remarkably similar ways. First, we are presented with the game’s reality; the player accepts the game’s reality. Then, that reality which we’ve accepted gets turned on its head and we are presented with something resembling a nightmare. In VII, we are thrown into the reality that Midgar is a city of extremes—extreme pollution and poverty in the slums, extreme industry and wealth for Shin-Ra. We have a city that Lovecraft may have found similar with his views of NYC, “a place devoid of a center or an identity or ties with the past” (Levy, 36); we know that Midgar was once composed of different towns with names and cultural traditions but no one remembers these (according to Jessie of AVALANCHE). 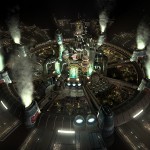 A city which has lost its identity and connection with the Planet– withered earth, withered people in the slums

It is a desperate space to which everyone belongs, yet doesn’t belong because the identity has been replaced with a sector number and garbage. We are presented with a reality that doesn’t strike too far from home—all of the wealth, the instruments of science and war, the politics, everything rests in the hands of the mega-corporation Shin-Ra. The reality the player is thrown into from the start is that Shin-Ra is the “main big bad” (specifically, President Shin-Ra, not Rufus), Sephiroth is reportedly long dead, the Promised Land is a myth and the Ancients are a long-lost race, Nibelheim is a picturesque little mountain town of no consequence on the other side of the ocean, we have no clue to the existence of JENOVA yet, we control the protagonist who thinks he is an aloof ex-SOLDIER 1st Class, and, we side with the eco-terrorists initially only because they pay us. The concept of Mako energy is explained as a natural phenomenon, and, like oil, it is drawn up from the earth to meet the game world’s high demands for energy. Materia is explained as crystallized Mako which contains condensed knowledge from the “Ancients” and the Planet; it is a tool, mainly artificially created by humans, to create a trigger for special abilities. Though it is “magic,” it is common knowledge for inhabitants of the game, so therefore it is not truly “weird.”

Next on “At the (Nibel) Mountains of Madness,” we explore landscapes and bizarre architecture.