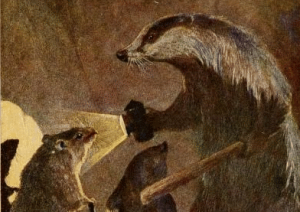 We love our animal heroes. Mr. Toad, Redwall’s Matthias, and even Donald and his nephews populate our literary landscapes. The idea of playing animal characters has been around since the beginning of the hobby, and modern games continue this tradition.

So what’s the attraction? Maybe playing animal characters lets us express our love for our pets and the natural world. Perhaps it is the novelty of thinking like a different species. However, probably the most significant reason is that it’s just plain fun. Where else can you pretend to be a squirrel in a socially acceptable way?

In this article, we’ll look at some things to consider if you’d like to run an animal player character (PC) game. We’ll also look at some choices for systems to use. So twitch that tail and let’s get going.

Technology Level — Will your players be wild animals like the rabbits in Watership Down? Will they be a group of house cats? Or will they be more anthropomorphic like the characters in the Brian Jacques Redwall series? Talk to your players beforehand to see what they would like in an animal-themed game.

Campaign Length — This concern arises whenever you are switching games or genres. Are you hoping for a long epic, or do you just want to test the waters with a one-shot? You might want to consider starting with a one-shot or running a convention game to see how it works out for you and your players.

Tone — Animal characters probably don’t lend themselves to dark, gritty themes. That’s not to say you can’t run such a game, but it may be a little trickier to pull off. In general, animal characters suggest a lighter tone. How light is up to you and your group. Will your game lean more towards a medieval epic, Duck Tales, or something in between?

Dedicated Systems — There are published options (Bunnies and Burrows, Mouse Guard, etc…) designed for animal PC’s. A quick net search turned up several free ones as well. These games require no conversion work, though you’ll have to learn a new system and there may be an expense in acquiring them.

Universal Systems – Many universal systems would work for animal themed campaigns. GURPS, FATE, FUDGE, or Risus provide different levels of complexity and cinematic flavor. Though they require some work upfront, you can tweak them to get the type of game you’d like. Another advantage is that most of these systems are available for free, or provide free starter versions.

Hack or Homebrew — Another option is to hack your current system to accommodate animals’ special abilities. This helps both players and gamemasters (GM’s) remain on familiar ground. If you are really ambitious, you could build your own homebrew ruleset. While hacking and homebrewing take time, they can provide you with exactly the game you envision. And there is no additional expense.

Running an animal themed game may require more thought and work on your part during your planning. However, if your players are open to it, an animal PC game can provide unique roleplaying opportunities. For example, in one game our frog jumped in the water and paddled his friends across the river on a raft, making motorboat noises all the way. Where else you gonna get that?

How about you? Have you run animal themed games? What advice can you share? Let us know below.