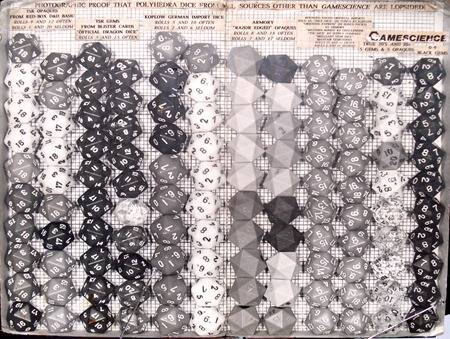 Almost every gamer has seen Lou Zocchi’s classic pitch for GameScience dice, and if you haven’t yet and have the 20 minutes, click that link. It’s worth a watch. About 4 minutes into the first video, Zocchi references his picture of stacked dice, seen to the right. This picture has long been the major piece of proof that GameScience fans point to as proof of the superiority of their favorite dice. We can date that picture between 1981 and 1991 because the far left stack of dice comes from the Red Box DnD Basic set, only two editions of which were published. The Moldvay Edition was printed from 1981 to 1983 and the Mentzer edition was printed from 1983 to 1991. That means that this evidence is between two to three decades old.

Thus, there are several major reasons for us to question this evidence:

Enter Alan DeSmet and his wife Eva, who decided to replicate the famous picture with modern dice purchased at Gen Con 2009 directly from the dealer booths of Chessex, GameScience, Crystal Caste and Koplow. Alan’s article can be found at his brand new RPG blog 1000d4 and you should go read it to get the full gist, though I will sum it up here before beginning my analysis of his data:

Eva purchased the dice in 2009, directly from each company’s booth at Gen Con. She attempted to get an assortment of colors to avoid bias from a single batch of dice. Eva told each company about our plans to measure the dice and asked if there were particular dice they wanted us to use. They uniformly said to choose whichever dice she liked. The GameScience staff reminded her to stack them on the side with the flashing as well.

The dice are unmodified and have not been subjected to significant wear and tear since their purchase. We have not used them for any games. They spent most of their life sitting in plastic baggies in a storage tub on a shelf. We left the flashing on the GameScience dice.

With these dice, they duplicated Zocchi’s earlier photograph with similar but far less dramatic results (click through go to DeSmet’s article where a huge version is featured):

Note that there is one fewer Chessex translucent die so that’s why those stacks are so much shorter.

Being scientifically minded however, they were unsatisfied with simply providing a snapshot. Instead they measured every face of every die with a digital caliper and calculated several statistics from their data.

For each die they computed the difference between the largest and smallest axis, a statistic they called Delta and then reported the minimum, maximum, average, and standard deviations of these deltas for each manufacturer.

In addition, they made their data set available online, so I downloaded it and ran some analysis of my own.

For my analysis I was interested in the following 3 hypotheses:

First, my analysis returned some descriptive statistics. These are similar to the ones provided in the original article butÂ aren’tÂ exactly the same because they’re grouped differently.

Note that Crystal Caste Metal has no standard deviations because it has a sample size of 1. (and at the price of them, we’re lucky we got the one in our data set)

Next, my analysis gave p-values for each of the above hypotheses. A p-value is the probability of observing the sample we did IF our hypothesis is true.Â  In all three cases, the p-value was <.0001. That means that IF it’s true that the average axis length across all styles of dice is the same (my first hypothesis) that the probability of observing a sample as unrepresentative of that as what we saw is less than a 1 in 10,000 chance. That’s like rolling a 0,0,0,0 on four ten sided die. Thus evidence very strongly rejects my three initial hypotheses.

However, Just because not all of the dice are the same, does not mean that all of the dice are different. To estimate which dice are similar and dissimilar, I rand some post-hoc analysis (analysis done after the initial ANOVA) and produced several easy to read graphs (as well as several huge boring tables of numbers that no one wants to see.) 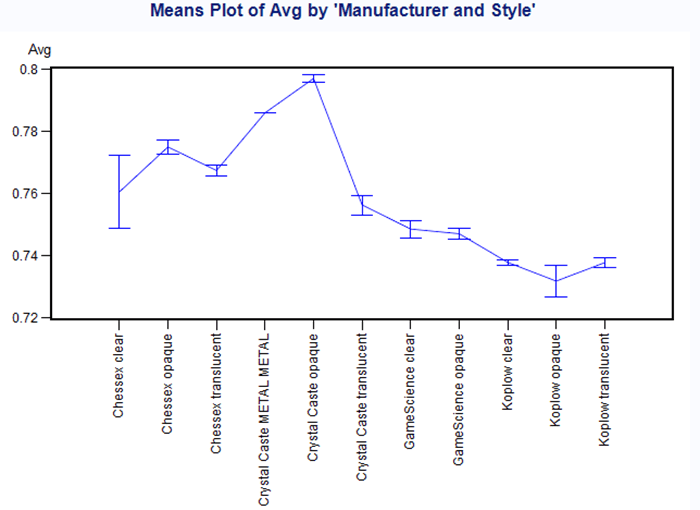 So this graph shows us that Crystal Caste opaque dice are the largest dice, while Koplow opaque are the smallest with various ranks in between. It also shows us that Chessex clear have the most variation in size and Koplow opaque have the next most variation in size, while Koplow clear have the least (we’re ignoring the fact Crystal Caste Metal appears to have no variation in size. That’s an artifact of it’s sample size of one). Note however, that all of these size differences are within a range of 8 hundredths of an inch, so unless you’re planning on a marathon dice stacking session in which consistently sized dice are a must, these differences are of little practical value.

Next we have a similar graph showing standard deviations of axis size across manufacturer and style. Here we see a set of three clear “strata” of dice. 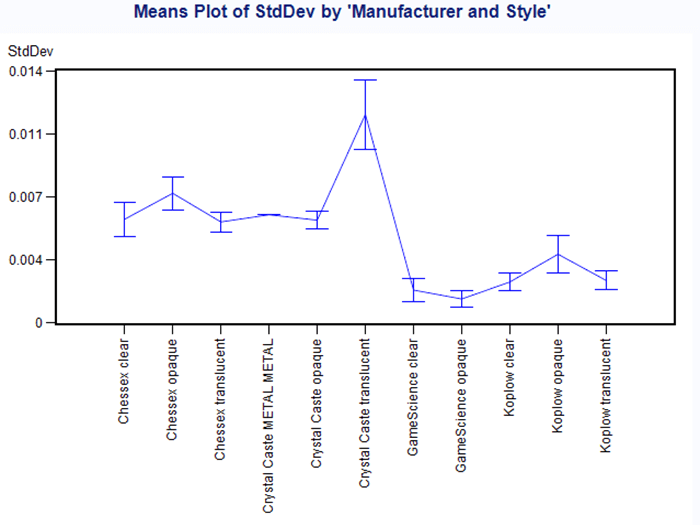 Finally we have a similar graph comparing delta statistics across manufacturer and style. Remember delta is the difference between the largest and smallest axis length on a die. 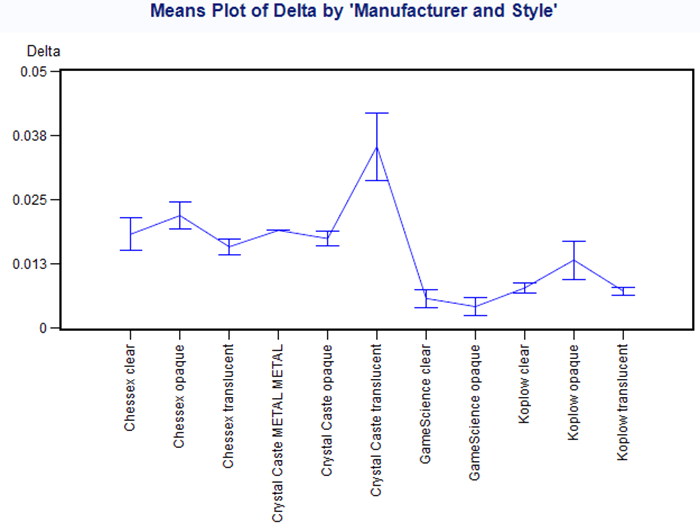 This graph looks almost the same as the standard deviation plot, with Crystal Caste translucent having the greatest deltas and greatest range of deltas, and the rest of the dice being split into two groups. However in this case, Koplow opaque “bridges” the two groups even more than it did with respect to standard deviation. The tables show it matches Chessex clear and translucent, and Crystal Caste opaque from the high delta group and only Koplow clear from the low delta group. Again, these results fall within a range of 5 hundredths of an inch so practical value is hard to determine.