An Elementary Alternative to Combat (Fire/Water) 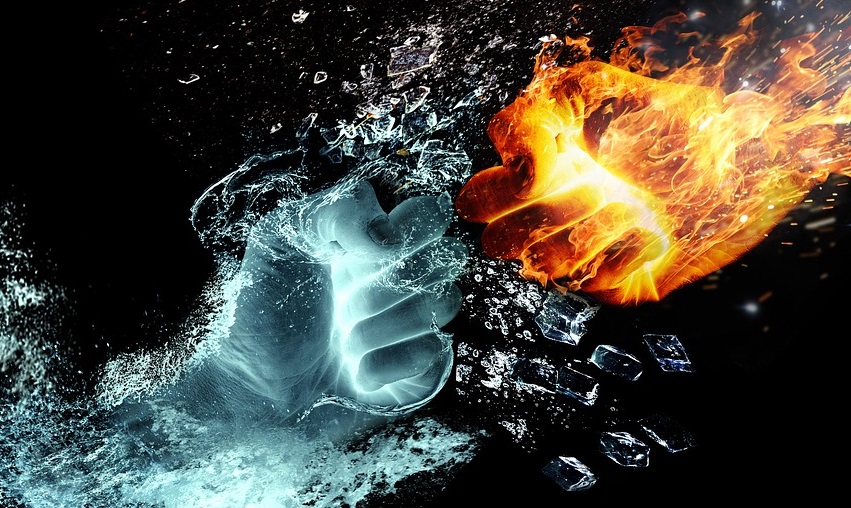 As any number of language classes have taught most of us, stories are what happens when characters who have goals meet people, places, things, or ideas that prevent them from accomplishing those goals. Most of us can probably name off a handful of the more famous ones: “Gnome vs. Nature,” “Gnome vs. Gnome,” “Gnome vs. Self,” “Gnome vs. Intriguing Cave Filled with Goblins.” But when it comes to games, particularly the ones that always seem to be on the shelf in your Friendly Local Gaming Store, it seems that we default to a certain kind of conflict — the kind that results in careful tracking of resources like hit points, status effects, and positioning. In short: combat.

In case it isn’t already clear, I am a really really big fan of this kind of gaming. There are few things I enjoy more than making and playing characters (okay, villains) with new and exciting ways to beat up heroes, move them around, and thwart their ambitions — but variety is the spice of life, and no matter how much I enjoy those kinds of games, once in a while it’s fun to pull out something a little different.

Of course, there are a ton of games that do things other than physical combat brilliantly. Some concentrate on using the defining qualities of characters in ways that mechanically advantage them, or focus on exploration, or mystery, or drama, or dozens of other different (awesome) things, using games as metaphors and tools and vehicles for experiences. Those games are also great, and I can’t encourage you strongly enough to go out and play those games. Seriously: go play one now.

But not everyone has the energy or (frankly) gaming group it takes to learn, make characters for, and play an entirely new system. In those cases, it can seem like your only option is to continue playing the same games you’ve always played, occasionally leavened by the introduction of a new module or character option.

Often, your best option is often to identify the tools that you have available to you in your group’s preferred game, and like Lego (or Taco Bell), put them together in a new and exciting way, or at least a way your group hasn’t seen before.

In those cases, your best option is often to identify the tools that you have available to you in your group’s preferred game, and like Lego (or Taco Bell), put them together in a new and exciting way, or at least a way your group hasn’t seen before.
Share52
Tweet9
Reddit1
Email

For pulse-pounding action, tension, and the potential for gruesome character death, natural (or unnatural) disasters can provide an alternative way for your characters to struggle against forces they can’t swing a sword at. The remainder of this article is devoted to two approaches focusing on natural disasters: the first is a kind of challenge-within-a-challenge that pits your characters against the relentless growth potential of a fire, and the second is a set of hooks and emotional notes to hit when dealing with a flood.

These tools can also be used to give players a sense of scope for the magic, superpowers, or feats of mad engineering that their antagonists bring to bear. It’s one thing to dodge a fireball, but quite another to turn around and realize that the fireball hit a building. In a land without fire codes, every such mishap can endanger innocent bystanders, rivals, or (for incredibly goal-oriented groups) an important MacGuffin.

Note that both fires and floods are real disasters, and none of this is intended to trivialize the very real suffering that actual human beings go through when these disasters happen. With that in mind, I’ve linked to a relevant charity next to the two disasters examined in this article. If your group feels particularly moved after a given session, or even if you just have some extra to give, consider donating to these charities. Money doesn’t solve many problems, but for a struggling nonprofit, it rarely hurts.

Fire has a pretty central role in the mythology of our games. From fireballs to ancient fire gods to The Human Torch, the idea of shaping and using flame through means magical or mundane is where any number of games start. At the same time, consider how devastating fire has been in the United States in 2018, despite our relatively robust infrastructure and the truly heroic efforts of firefighters and first responders.

When a villain (or even a hero) carelessly tosses out a spell or power with the deceptively simple warning that it may catch objects on fire, institute rules that cover just how destructive and uncontrollable fire can be.

When a villain (or even a hero) carelessly tosses out a spell or power with the deceptively simple warning that it may catch objects on fire, institute rules that cover just how destructive and uncontrollable fire can be.
Share52
Tweet9
Reddit1
Email
The excellent board game Flash Point has excellent mechanics that illustrate just how easy it is for a fire to rage out of control. The below rules are (very) loosely inspired by the way that this game handles fire.

Particularly sadistic game masters or those with groups that enjoy especially grueling challenges may institute other potential obstacles — even after they’ve been put out, fires produce a lot of smoke that may require rolls to avoid conditions like being sickened or poisoned, and areas that have been devastated by fire can easily be difficult or treacherous to move through, especially if players are attempting to rescue bystanders, priceless objects, or gigantic handfuls of snakes. Game masters may also require a roll for all or some approaches to putting out a fire, though note that doing this may well risk exposing your players to spectacular failure.

If you’re going to destroy the world, flooding is really the way to do it;

If you’re going to destroy the world, flooding is really the way to do it.
Share52
Tweet9
Reddit1
Email
Cultures all over the world are intimately familiar with the damage that can be done by out of control water, Atlantis and Noah’s famous Ark immediately spring to mind. Characters might face flooding through the actions of an angry god, demon, or godlike sorcerer. Weather magic or super science might cause endless rain, or local dams can be threatened or destroyed by careless magic or powers, or by deliberate sabotage. For an unusual flood, consider a substance other than water, and the damage it can do — studying up on the Great Molasses Flood of Boston is a great place to start.

Unlike with fire, when a flood is under way, there’s little any but the most powerful characters can hope to do. Instead, characters should face challenges in two distinct phases: during the flood, and afterward.

During the Flood: Survival

During the flood, characters’ main focus should be escape and rescue — disaster is happening, and the characters can only hope to survive it. If using tactical miniatures or similar combat, consider restricting movement in one direction — characters may be able to move north, south or west, but cannot move east, due to the relentless pressure of water forcing against them. Terrain should be difficult or impossible to navigate through, and characters should constantly be forced to make decisions between things that they value.

For an especially bleak experience, linger on locations, objects or buildings that have been important to characters in their previous stories as they wash away. As always, be conscious of your players’ feelings, and know when too much is too much. The X card is an excellent tool (though by no means the only one) for helping navigate this kind of scene.

After the Flood: Recovery

Rebuilding communities and the buildings that house them is only the most obvious part of recovering from a disaster like a flood. In modern floods, rebuilders are forced to deal with the logistics of moving new materials into ruined and impassable areas — something that can take weeks or months, even with modern technology.

During that time period, even basics like food become scarce, and people can fall to desperation. Game Masters may want to play up the potential for conflict inherent in this, and allow players who specialize in the social elements of game play to step up and prevent riots or other forms of violence.

For external threats, opportunistic villains may step in and make impossible promises, or a warlord may see a population that, though poor, is ripe for plunder.

All of this is to say nothing of how such a weakened population deals with disease or injury — or with the health problems that can easily arise when waterlogged crops lay rotting in the fields and sodden soil sprouts disease, fungi and mold.

Stories of disaster can give heroes challenges that they know they stand no chance of fighting against — neatly avoiding the unspoken assumption some groups have that “if it has hit points, I can kill it.” Such encounters or stories can break up combat and even social encounters in ways that can make a world feel more real and lived-in. As with any topic that has real-world equivalents, game masters should pay attention to the emotional states of their players, some of whom may have directly or indirectly experienced these disasters, and make sure that everyone is on board with the inclusion of these kinds of elements. With the whole group on board and sharing in an understanding of what they’re in for, this kind of game can be a great way to spice up your sessions.

Do these kinds of disasters have a place at your table? If so, how have you used them in the past?

1 Response to An Elementary Alternative to Combat (Fire/Water)