An Elementary Alternative to Combat (Air/Earth) 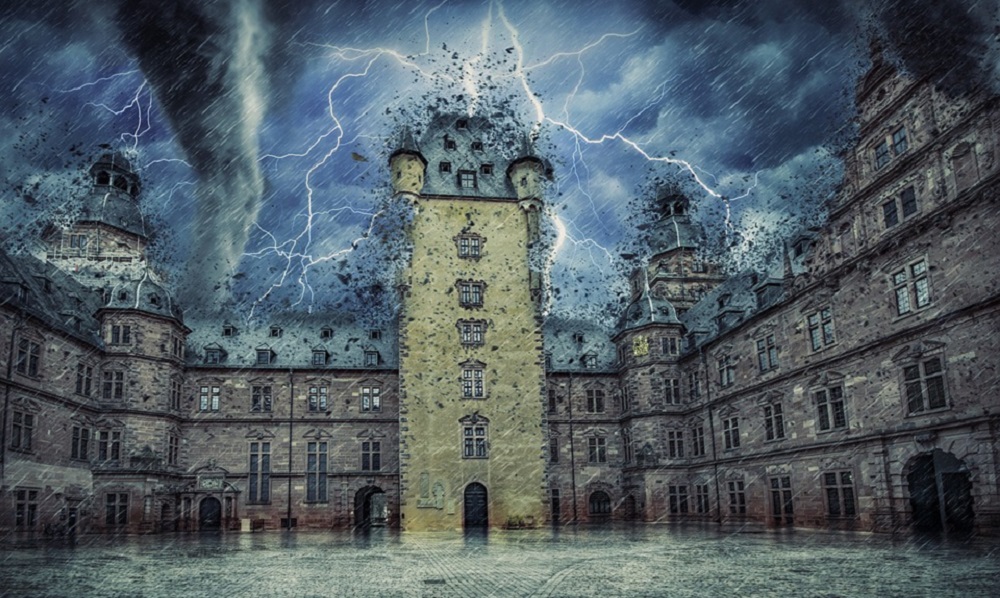 Tactical RPGs like Dungeons and Dragons, Savage Worlds, and the AGE family of games (Blue Rose, Dragon Age, and the upcoming The Expanse RPG) offer an experience completely unlike more story-based games. While they can certainly contain any amount of intrigue, tense character moments, and plots as rich as any story-focused game, these titles tend to focus on individual encounters or situations more as challenges to be overcome through a combination of die rolls and player choices, using a relatively-constrained set of agreed-upon rules. Though this type of play is sometimes derided as “roll-playing” rather than “role-playing,” these rules can help create a sense of verisimilitude and immersion, as everyone has a shared understanding of how their skills and choices relate to what is possible, impossible, and extremely risky in the world the characters occupy. The rules help carry some of the weight of world-building and decision-making, and can lead to some truly unexpected, unforgettable game moments. While I love story-based games, my heart will always belong to games that fully flower with elaborate maps and miniatures that draw the whole table in.

Because these games reward a fuller understanding of these rules more than less-tactical options, players and GMs who have mastered these systems tend to prefer to stick with them, and can sometimes be resistant to trying out other games or other play styles. More often than not (and more often than we’d like to admit) that means that the overwhelming majority of challenges any given group is likely to encounter are either resolved with either relatively little interaction with the rules or with combat. There’s nothing necessarily wrong with that approach to gaming; if you and your players have already found the right combination of rules, variety, and challenge, you probably don’t need this article (or any other) to tell you how to have fun; you have, in fact, figured out how to win at RPGs.

…if you and your players have already found the right combination of rules, variety, and challenge, you probably don’t need this article (or any other) to tell you how to have fun; you have, in fact, figured out how to win at RPGs.
Share62
Tweet7
Reddit1
Email

If, on the other hand, you find yourself as a GM or player wondering whether you can make a rules-adjudicated encounter varied, unexpected, and interesting in ways other than “hit them until they run out of HP (or Wounds or Fortune),” then maybe it’s worth looking into (drumroll please) An Elementary Alternative to Combat.

The preceding article in this series covered some ways that natural disasters (specifically, fire and water) can use movement, combat, and health rules to face challenges that can’t be defeated with violence or clever words. Continuing in that vein, and because Captain Planet had way, way more of an influence on my upbringing than it probably should have, this article will give you a few tools for making use of air (tornadoes) and earth (earthquakes) as challenges for your group to overcome. As with the previous article in this series, it’s important to highlight that these are real natural disasters that players in your group may already have experiences with. Make sure that these are topics your group will be able to enjoy. Additionally, none of this is intended to minimize the real human cost of these events. If you or your group find yourselves thinking about how awful these events are for the characters in your world, consider throwing a few dollars at the charities called out in these sections. If you can afford to, it’s surprisingly easy to help make the world a better place.

It may surprise you to learn that tornadoes do more than drop houses on nuisance siblings.

It may surprise you to learn that tornadoes do more than drop houses on nuisance siblings.
Share62
Tweet7
Reddit1
Email
Tornadoes can last for more than an hour, but generally (in the real world) last less than ten minutes.  Though they are very small when compared to the scale of other types of weather, with winds that can reach up to 300 miles per hour (~483 kph) or more, they can easily destroy every every structure in their path. A truly realistic depiction of heroes trying to survive a tornado probably wouldn’t be all that interesting; just by themselves, winds are destructive enough, but when you factor in debris, collapsing buildings, and other hazards that occur when basically everything becomes airborne, “realistic” rules for making it through a tornado outside of a shelter would probably be more like “save vs. death” than “a tactically interesting situation.

However, in the fine tradition of Dorothy Gale’s tornado-proof farmhouse and  Indiana Jones’ radiation-proof refrigerator, we can move forward with the understanding that sometimes bad science can make good stories. In worlds with elven wizards, alien cyborgs, and time-traveling sapient dinosaurs, it’s not like that’s likely to be the biggest stretch in your game. With that in mind, some considerations in having your characters survive tornadoes.

Earthquakes happen. Tectonic plates shift, wicked forces imprisoned in the earth rise, new and ill-considered energy sources get tested without anyone being warned. An earthquake is an excellent way for you, as a GM, to revisit former set pieces, but with a new twist. Some ways that earthquakes can be used to add depth to an encounter, scene or session:

Player characters are (usually) powerful, and their power to affect the world is part of what draws us to them. There’s something satisfying about the fantasy of seeing something wrong and being able to fix it. But every once in a while, players should encounter something their sword can’t conquer, and the exercise of learning how to use the power, ingenuity and strategy they’ve always used to beat the baddies for another purpose can be a breath of fresh air, or fire, or earth, or water.

…every once in a while, players should encounter something their sword can’t conquer, and the exercise of learning how to use the power, ingenuity and strategy they’ve always used to beat the baddies for another purpose can be a breath of fresh air, or fire, or earth, or water.
Share62
Tweet7
Reddit1
Email

Do you have any go-to non-combat challenges you use in your games? If so, tell us about them so we can use them in ours!