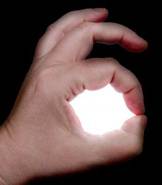 An interesting side topic came up in the comments thread for Does Age Matter in Gaming? [1]: sexual themes and younger players.

In thinking about this, two GMing angles came to mind:

• Deciding whether or not to incorporate sexual or other mature themes into your games at all.
• How that decision changes when you have younger players in your group.

I’ve never had to make the second call (mature themes and kids): when I was younger, so was everyone in my groups (and we were, at times, filthy little bastards); and now that I’m older, I’ve never GMed for kids.

In terms of the first angle, I generally steer clear of using sexual themes in my games. This is partly due to personal preference, and partly due to the complexities that surround this issue — it can get messy.

And in that vein, for this first day of GenCon 2007 I have a GenCon anecdote to share: The game my GenCon group refers to as “All Holes Filled with Harn.” As you might have guessed from the title, this post could be considered NSFW (not safe for work).

I don’t remember what the event was actually called — only the Clerks reference has stuck. There’s a scene in Clerks where Randal orders new videos from his distributor, one of which is called All Holes Filled with Black Cock, in front of a horrified mother and her young child. It’s hilarious.

Harn, of course, is Columbia Games’s insanely detailed low-magic fantasy setting — one my group had never tried before. GenCon is always an opportunity to experiment with new games, so we decided to give it a shot.

Given that warning, I might have a) elected to play another character, or b) said, “Okay, I’m up for leaving my comfort zone — let’s do it.” No warning meant I never got to make that decision, and that’s the point of the anecdote: using sexual themes in your game should definitely be part of your group’s social contract [2] — never spring them on your players.

What do you think about this issue? I didn’t make this a straight-up question post in part because I wanted you to be able to consider it from any angle — the two I presented are just starting points.

(I’m at GenCon from Wednesday, August 15th through Sunday, August 19th — two trips in a row makes for a busy month! As before, there will be a new post every day, but I won’t be able to respond to comments or reply to emails. I’ll be back with a full report next week — have a good time without me! — Martin

Comments Disabled To "All Holes Filled with Harn"

A warning of things like that is always good. The NSFW tag should definitely have been applied to that game for exactly the reason you said. It give you the option of choice before the game starts.

When I glanced at the title on my google homepage, I read “Harn” as “Ham”. I didn’t click on the link until I finished reading all my other standard morning feeds…

Absolutely this should be something players are made aware of and agree to before a game starts—it should NOT be something that gets sprung on them. They should have the opportunity to say “no thanks” if they want.

Although my current group does its fair share of role playing, we tend not to tread these particular waters. Despite the fact that my group consists of 30-40 somethings, not only would serious sexual themes take most of the people beyond their comfort zones, these themes would never make it past junior high maturity (insert “immovable rod” joke here). I know my group.

Back in college I played D&D with a group of theater arts majors. This group focused on high levels of role play (not quite to the level of LARP though). Dealing with mature themes was well within this group’s comfort zone. Aside from conversations leading up to various situations, the actual R rated scenes were similarly handled off camera.

I feel that mature themes such as relationships, sex, marriage, etc. can lead to rich role play and character development if introduced and handled appropriately.

I definitely think that all participants need to be informed and polled before running any kind of adventure or campaign that has these elements, and that everyone’s comfort level needs to be ascertained before proceeding.

Well if you advertise, you miss all the fun… maybe a “may contain sexual contents” or “for mature gamers only” (mature would then have multiple meanings).
But definitely without any details… RPG can (and will and also should) be used in accordance with players maturity. We’ve seen that during the “infamous” (?) publication of the supplement for Wraith (“charnel houses of europe”).
Instead of a social Pact, you just know your players and that should suffice in case of a doubt then just ask the person would avoid any bitterness (a good mature gamer could handle the acolyte, definitely not to try for a newbie female gamer…)
Hell, yes, it would have been cool to take 2 minutes with you to ask you if you were ok for some strong mature content, just to pave the way…

I’m not big on sexual content in RPGs. MTV is so readily accessible for that kind of stuff.

In my current group we didn’t discuss content subjects in our social contract session, and to that extent we’ve tread lightly on anything beyond PG-13 material.

However, at the first full-play session I mentioned during a description of the local tavern that some patrons were seen leaving arm-in-arm with “servants” through a back door. (I took this hint from the DMG2 which noted that, during medieval times and the early Renaissance, taverns were rife with prostitution.)

One of my players picked up on it immediately and started looking for a hook-up. After some semi-silly “foreplay” he made his paired exit. We then glossed over the details. I think the situation helped solidify his (emerging) PC archetype as a ladies’ man, and everyone seemed to enjoy the short exchange.

Wow, thanks for the ammunition to haze you with after the GM-Fu seminar…

Seriously, I had a murder-rape of a teenage girl in one of my sessions, but I cleared it with all the players individually (asked in group, they may have felt social pressure to agree). It worked out great, and when they caught the guy (who was admittedly cursed, but was enjoying it), the party truly felt like they did some good.

Ah, thanks for reminding me why I loved Harn… 😉

I have addressed some sexual themes a couple of times, but it is something I do very carefully and only if I really trust my players.

In one instance, the scene was played through with a player in a one-on-one session, and it involved him dealing with the aftermath of a horrendous event.

At another time, I introduced an NPC whose purpose in the game was to tempt one of the PCs. He never bit, probably fearing the evil things I/she would do to him if he did. (He was quite correct, of course.)

In any case, I generally handle things off-screen if they come up, and I can’t say I’d trust too many other GM’s to handle sex in a way that I’d feel comfortable with. Were I in the situation presented in the article… I honestly don’t know what I’d do. I would hate to ruin anybody else’s fun, but I’d also have to obey my conscience. I guess perhaps I should be very judicious in determining which sorts of games I join.

Well I used the guide published in Dragon magazine 300, in my campaign’s. There was an artical about the upcoming book of vile darkness, and they rated several aspects of the game from light hearted to severe. Everyone in the group I gamed with used that scale to rate their comfort level and it lets us go into games where no one is is left feeling uncomfortable

Good reading (and good links) — thank you to everyone who responded to this post!

And for the record, Telas did indeed give me some shit about this at the GenCon TT meetup. 😉