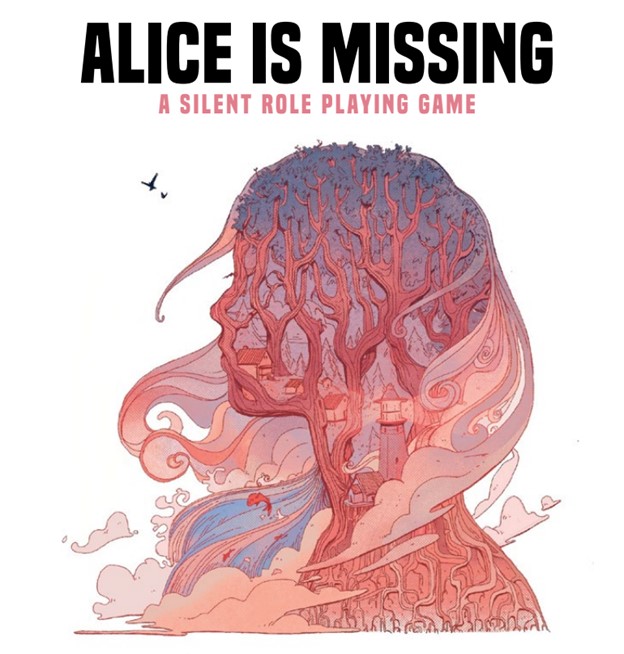 Every so often, an idea really jumps out at you. Roleplaying games that use cards, dice with special symbols, or function entirely on the spending of narrative currency. Adding to that list, for me, is a roleplaying game that is played entirely by text message.

Alice is Missing is a game where players take one of a limited set of roles in a story where a group of acquaintances attempts to find out what has happened to their friend, who has disappeared. There is a very specific procedure for playing this game, and the game is guided by drawing various prompt cards.

My review is based on the PDF release of the product. To get a better idea of the product, I printed out the cards that are included in the release, and laminated them. Additionally, I had a hard time setting up a playtest for this, so unlike most reviews, I searched out a playthrough to watch to assist in this review, which you can see here:

The items included in the PDF bundle include PDFs for printing out the prompt cards, a summary of play sheet, an instruction booklet, a PDF of different missing posters, and a character sheet. In addition to these components, there is a link to a video used for timing the play experience, triggering various prompt cards, which you can find here:

The cards are split into the following subcategories:

These cards are distributed and flipped based on the procedure of the game (except for the X Card, which serves as a safety tool for the game).

The character sheet isn’t the usual character sheet, with ratings for different traits. Instead, it is a combination of areas for recording the answers of other players when they answer questions, and a place where characters can take notes as the mystery evolves. 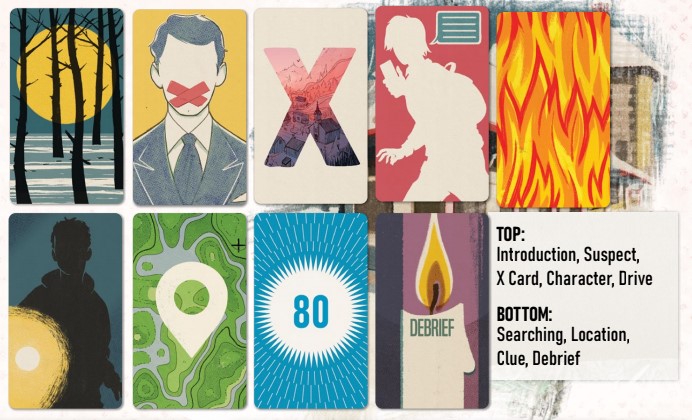 In addition to the above-mentioned items, players will need a means of recording data on their character sheets, and either cell phones, or some means of simulating a text-only set of communications between multiple people, which also allows for side conversations that aren’t intended to be public for the entire group.

You could use a regular timer to trigger the cards in the game, but the linked video subtly changes the soundtrack, which should be the only sound heard during the game, as the story advances over an hour and a half.

In addition, this is a game that is likely going to need a quiet space to play for maximum effect. While the game mentions convention play, this is going to be more or less challenging based on the play spaces provided by the convention. Also, there are a few prompts, like shutting off lights to emulate some events, that may not be possible outside of a private space set aside for the game.

Characters will also need to have the means to record a message that can be played later in the game.

The rulebook has a three-page section on how to modify play for fully online play, which is probably good, considering when this game is being released. The online suggestions involve setting up a lot of information upfront, so less has to be shared when characters get together to play the game. Beyond that, most of this review is going to look at the “standard” assumptions of playing the game together, face to face.

One player acts as the facilitator, but that player isn’t really “running” the game, as they are also playing a character. They are just the character that assumes the extra duty of keeping the process moving smoothly. That player always plays the same personality in the game.

There is some fairly extensive set up for the game. It’s not complicated, but they are a series of procedures that have to be done in a specific way so that the game unfolds properly once the timer starts.

Players pick one of the Missing posters for Alice. There are various images of Alice, portraying her in diverse depictions, from physical traits to clothing and style. Characters will pick one of the characters’ cards, which are the same five characters for every play through of the scenario. The game needs three to five players, in part because too few players, and some aspects of the final resolution don’t work properly.

One of the things I greatly appreciate about this game is that it is part of the setup process to go through the lines and veils process. Players will mention plot elements that they don’t want to be included, or plot elements that they are okay including, but for which they don’t want lingering details. There is even a default set of lines and veils suggested for the game. An X Card is included as part of the deck, but there is also an instruction on using parentheses to communicate out of character messages, including sending an (X) as a virtual text message version of the card. Given that this is a game about a missing girl that could involve violence and crime, all of this is very appreciated.

Characters introduce one another and answer some questions, which they can record on their character sheet. Each character has a secret, which they are encouraged to reveal at some time during play. Characters are distributed Clue Cards, which have a number on the back. The cards are turned over when the timer reaches that number, so that the character can perform the actions on the card. Characters also pick locations and suspects, for which they create reasons for why those locations or people are suspicious.

Characters also record their last voice message that they left Alice before she went missing, for use later in the game.

The facilitator gets the first Clue Card, which instructs them to frame the search for Alice. Characters can go to different locations and draw Searching cards. These cards don’t tie directly into the plot, but tell characters what they find in different places when they investigate. No two players can show up at the same location at the same time.

When the time displayed on the back of the Clue Card is indicated, the player with that card turns the card over, and performs the actions on the card. Sometimes this instructs players that they have found something significant to the story (for which they may work in their Searching cards).

Characters cannot find Alice, her cell phone, or her car in any of their narrations. Eventually, some of the later cards will give the players instructions on how to shuffle and narrow down the suspects and locations directly connected to the mystery. Several of the late-game cards indicate that a searcher might be injured or even killed, and those cards give the player directives on how to communicate information, and when to stop. In some cases, the characters will flip a coin to decide how an important event will play out.

This all eventually narrows to finding out where Alice is, what happened to her, her fate, and what happened to the person that managed to find her. After all of this happens, characters will play their recorded voice messages to Alice that they created before the timer started.

The final stage of the game is a debrief. This is summarized on a card, and it involves tying up loose ends, and checking in with players to make sure they are emotionally okay. Players are instructed to spend as much time as they need to work through the thoughts and feelings they have, depending on how the game has unfolded.

The rulebook also addresses that the game is an opt-in experience with an open table. This means that if a character needs to leave, they should feel welcome to leave. This does mean that the facilitator will need to make sure the Clue Cards are handled at the proper time, and the facilitator is directed to invite the player back to the table to participate in the debrief if they feel comfortable doing so.

Light at the End of the Tunnel
I really think this is going to be a game that people looking for an emotional experience will appreciate.
Share11 [3]
Tweet16 [4]
Reddit1 [5]
Email [6]

Just reading the process for this game triggers some emotional responses. I really think this is going to be a game that people looking for an emotional experience will appreciate. I love the means of conveying both the distance and immediacy of the search and the character’s relationships via text messages. The timer mechanism creates an external expectation that can easily facilitate dread or excitement. I like the clearly marked sets of cards as triggers and prompts to move the game forward, and that the randomizers are quick, brief, and used towards the end of the game. I love how well-integrated safety procedures are into the overall process of the game, and the rules.

There is a lot of procedure to this game, and if you miss one too many beats of that procedure, what was building to a very emotional experience could get derailed. I like the idea of the Searching cards, but it also feels as it if would be at least possible for players to get too carried away with their integration of these cards into the mystery, to the detriment of later developments on the Clue Cards. While there is some hardcoded inclusion of marginalized populations and issues that might come up, I kind of wish there was a whole section dealing with more marginalized identities and how to incorporate those topics with an eye towards safety.

If you like heavily story-based, emotional games, I think you will want to check this out. Even if you are interested in examining unique mechanics as a means of telling a story based on a timer and prompts, this will make for some great analysis.

While I pointed out some other topics I wish the game had touched on, I want to reiterate that it does exactly what I wish more games would do in the modern era; integrate safety into the assumptions of the game, rather than adding safety concerns as a “module” after the fact.

What other role-based storytelling games have you encountered? Do timers in a specific scenario enhance the experience for you when playing a game? How often have you felt that the play space really needed to be right to make a game work? We would love to hear from you in the comments below.