Back in April (2013) I was [REDACTED] dollars into the Dwarven Forge Kickstarter, amongst a few others.

A few weeks ago, I received the bits and pieces of my soon-to-be-epic-dungeon terrain, and like a small child during a holiday that will not be named because damnit it’s not even Thanksgiving yet I unwrapped it with glee.

You see, the Dwarven Forge folks had different levels of rewards, which included painted and unpainted versions of their sets. Painted cost more so I, wanting more pieces, decided “Hey, I can totally do this myself!” and got their standard “Dungeon Gray.”

When they arrived, all the pieces in all my boxes looked like this: 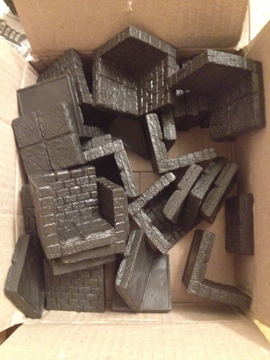 Now, if you’ve ever done any mini painting, you’ve seen the size of your standard mini-paint bottles. I got five full sets of pieces, add-ons, and all the unlocked rewards to boot. There was no way Mr. Mini Paint Bottle was gonna cover it all. And there was no way I was going to pay $3.29 per bottle for dozens upon dozens of tiny bottles. I did some googling, found out folks were getting fine results using liquitex acrylic paint, and shuffled over to my nearest craft store. $15 later I had three tubes of paint that will last me the whole dungeon painting task. Or that’s the theory, anyway. 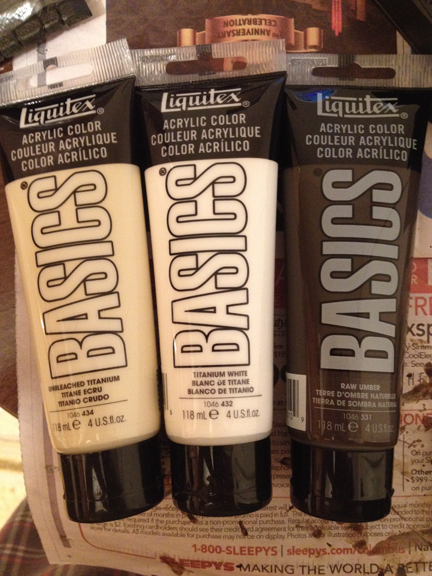 Take THAT Mr. Tiny Paint Bottle.
(For those who don’t want to squint, the colors are Unbleached Titanium,  Raw Umber, and Titanium White) 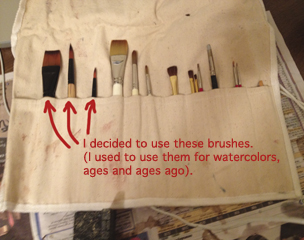 All I needed to do was set up my workspace.

I’m not going to go into much about general painting needs. If you don’t know what you need, there is this thing called the internet. I reccoemnd giving it a try, but be careful, it can bite.

Personally I’m a big fan of paper towels. And when I say “fan” I mean “There is probably a forest weeping somewhere at the fact that I use so many paper towels while I’m painting.” I use them to dry off my brushes and my hands, I use them to clean up spills, I use them remove pigment from a brush or pieces. . . I could go on and on. If you take nothing else away from this article remember to stock up on paper towels when you paint.

Anyway, when I’ve laid down newspaper and gotten out my various pallet things and paper towels and whatnot, this is what I wind up with: 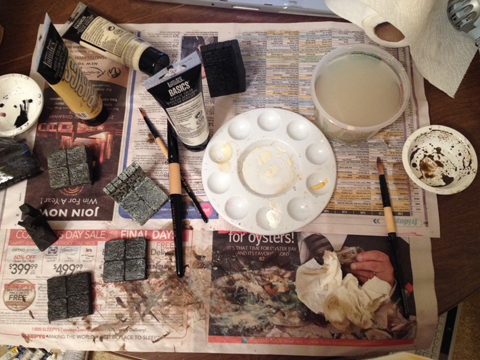 I got off to a rocky start. I discovered that it was best to cover each piece with the Unbleached Titanium (henceforth “U.T.”), followed by a wash of the Raw Umber (R.U.), and finished with some drybrushed Titanium White (T.W.). How did I discover this? With much cursing when doing the R.U. Wash First and THEN the U.T. was resulting in. . . you know what? Let’s just say it was terrible, there was much gnashing of teeth, and then I got it together. 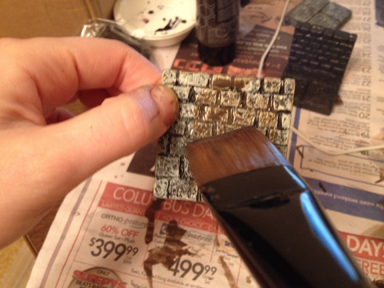 This is me doing the Raw Umber wash after covering a piece with the Unbleached Titanium.

Once I figured out the best order for the layers, things went smoother. I started doing groups of pieces in the U.T. then doing the wash on all of them, and finishing them off with the drybrush. The first day I felt really productive—until I pulled out the other boxes I had brought home and compared the amount of pieces painted to the number unpainted. Did I mention I haven’t even brought all the boxes home yet? More than half of them are sitting under my desk at my office, where I had all this shipped to. 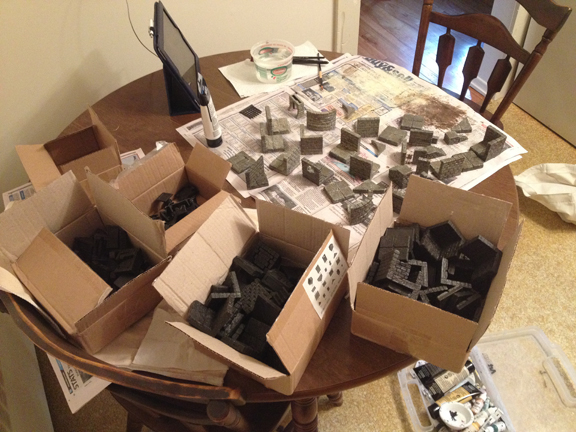 OH GOD WHAT HAVE I DONE.

After that, I tackled the project on a second day with renewed vigor: 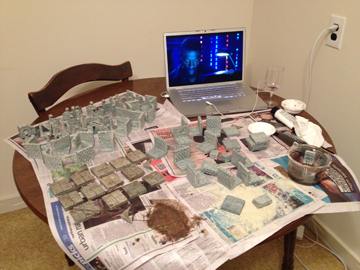 Yes. I’m watching LEVERAGE while I paint dungeons. Deal with it.

Now, I’m not nearly close to done with this project. I am making progress, though. The way the pieces turn out is rather nice, if I do say so myself. 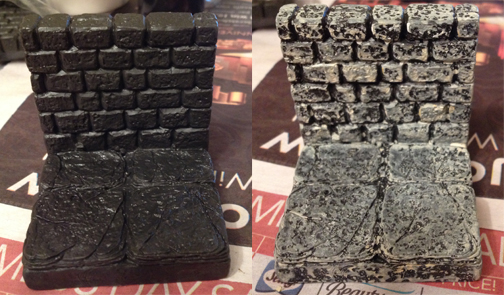 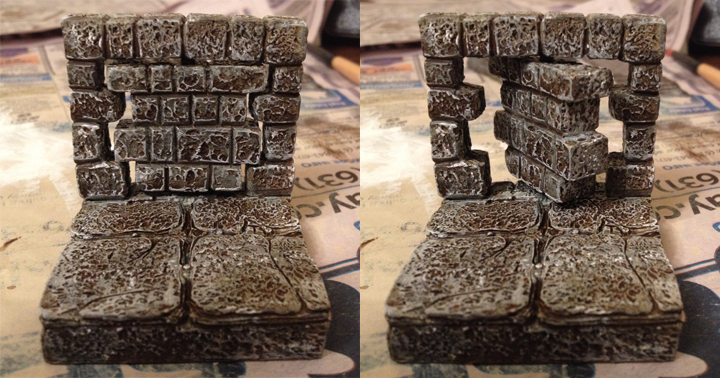 One of my favorite pieces: the secret door! 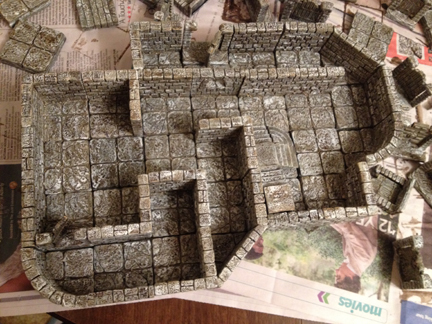 I have no idea how long this is going to take me, and, frankly, I’m not even going to try and guess. I still have hundreds of Reaper’s BONES minis that need painting, too. It’s a good thing I find painting relaxing, because it looks like I’ll have plenty of it to do for the next several months, if not years.

But don’t worry. Sooner or later I’ll have it all in the bag. 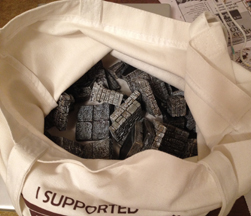 4 Responses to Adventures in Dungeon Painting