This is a story from the World of Darkness Crossover Game I was in for a time. For your own sanity: DO NOT EVER RUN OR PLAY IN A WoD CROSSOVER GAME–an article about that will probably pop up some time in the future.

My much-stressed Hunter, Daisy Maza (named after my two favorite fictional cops), was leading most of our crossover group–Dusty the Promethean, our mages Bear and Relic, and a Changeling–in a charge against a bunch of cultists who attacking The Dumbest Task Force Valkyrie Operatives EVER (the GM was a bit new to the GMing gig . . . hence his running a bloody crossover WoD game). Our Werewolf, Chase, was something of an impatient fellow. Instead of following the main group Chase took our brand-new Vampire PC to an alley by the Task Force Valkyrie base. He pointed to the darkest part of the alley and said “Stand over there, close your eyes, and let what happens happen.”

The female Vampire spun around and said “Excuse me? If there is ANY funny business I will shoot you!”

“No, no, no! Just–just stand over there, OK?” Chase demanded. 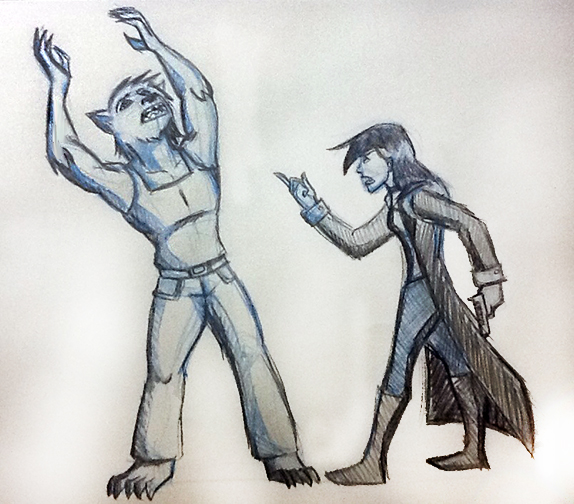 Out of character we were all dying laughing. We knew that Chase is just trying to bring the Vampire into the Shadow Realm so they can slip past the gunfight that stands between them and the TFV base, but the Vampire as a character has no idea what’s going on.

To emphasize his character’s honorable intentions, Chase’s player said, “He’s just standing there. He’s not following her.” Then after a pause he asked the Vampire’s player “Are you resisting?”

The Vampire’s player bursts out with “Resisting what?”

Far too late, Chase’s player realizes how terrible that sounded.

The rest of us could no longer speak for laughing.