Adventure Notes: One Page per Encounter 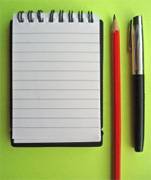 In the comments on Metagame Elements and Transparency, TT reader Chris mentioned successfully reworking an encounter while improvising part of a session. Chris’s comment got me thinking about different ways to write up adventure notes — specifically, writing them with adaptability in mind.

Adventure notes are a funny thing: I don’t know about you, but outside of published adventures I think I’ve seen a grand total of two sets of adventure notes written by other GMs. In a way, that means there’s an echo chamber element to writing scenarios: How the hell do you know what you’re doing right, except by trial and error?

When I’m writing an adventure, I just type the whole thing up in roughly the order I expect it to happen, with a few reminders and notes up front. I use the method I outlined in the free PDF How to Take Simple (Yet Badass) GM Notes, which works well for me. This results in several pages of stuff in what might not turn out to be a very useful order — or format — at all.

Reading Chris’s comment, it hit me: Why not break adventure notes down into encounters, and give each encounter its own page? That way, when your players take the game in an unexpected direction (which, inevitably, they will), you can more easily shuffle encounters on the fly, tweak scenes to fit their new place in the session and slot in entirely new encounters.

What do you think of this approach? What approach do you take to writing adventure notes?

(I’ll be in Michigan from Thursday, September 20th through Monday, September 24th. As always, I’ve cued up a post for every day that I’ll be gone, but I probably won’t be able to respond to comments or emails. Have fun, and I’ll see you on Tuesday! — Martin)

13 Responses to Adventure Notes: One Page per Encounter