Today’s guest article comes from Keith Garrett, an avid Gnome Stew reader, oft times guest article contributor, and he has now outed himself as a podcast listener. If you like podcasts, check out the Gnome Adjacent podcasts – Misdirected Mark [1](Chris, Phil, Bob) , She’s a Super Geek [2] (Senda), and Talking Games [3] (Send and Phil). And now, on with the show… review and descriptions by Keith. – John “I’ve got a voice for print” Arcadian 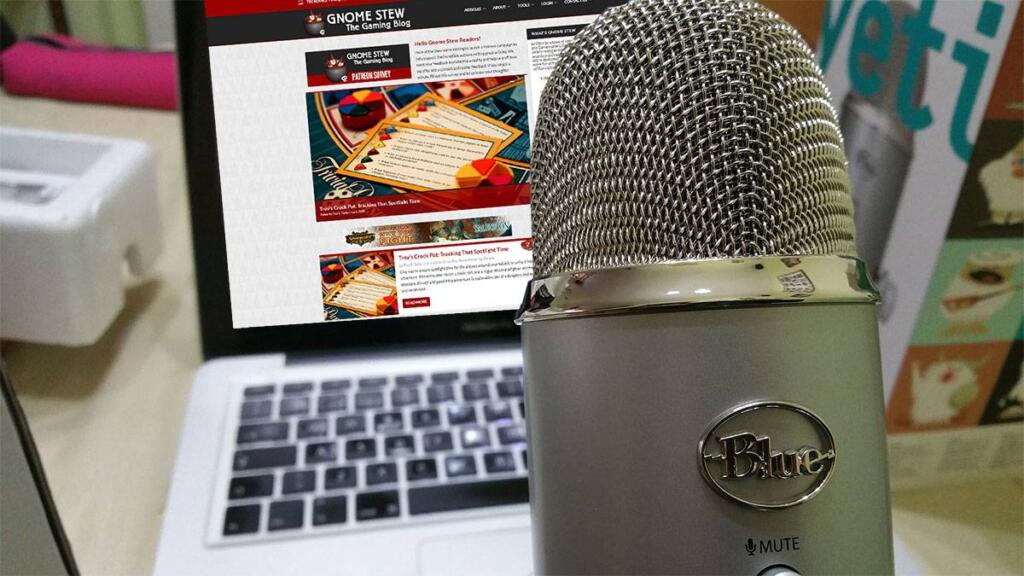 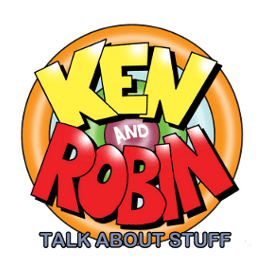 Ken and Robin Talk About Stuff [4]

Purely devoted to the Dungeon Crawl Classics RPG, Spellburn is a model of how a podcast can make sweet audio love to its subject matter. The charming hosts (Judges Jim, Jobe, Jeffrey, and Jen) thoroughly explore game rules, interview DCC designers, review products, recap convention appearances, and discuss all matters related to the mythical Appendix N [6] (Gary Gygax’s list of inspirational reading from the 1st Edition AD&D Dungeon Master’s Guide). I just finished listening to the entire Spellburn backlog, and I’m about to start through my second round of every episode.

During his long run hosting GM Intrusions, Lex Starwalker realized that a lot of the topics he discussed would apply to other games. So he started Game Master’s Journey, my other favorite podcast of his. (Lex has produced several–he’s kind of a human podcasting machine.) As I write this, his most recent episodes have focused on D&D, but he’s also discussed Edge of the Empire, 13th Age, and other games. Beyond game-specific topics, he also talks about general issues like how to be a good player, how to improvise, and how to run an adventure for new players. One of Lex’s popular topics is worldbuilding, and he’s devoted a healthy number of episodes to demonstrating how he’s creating his D&D campaign setting, Primorida. 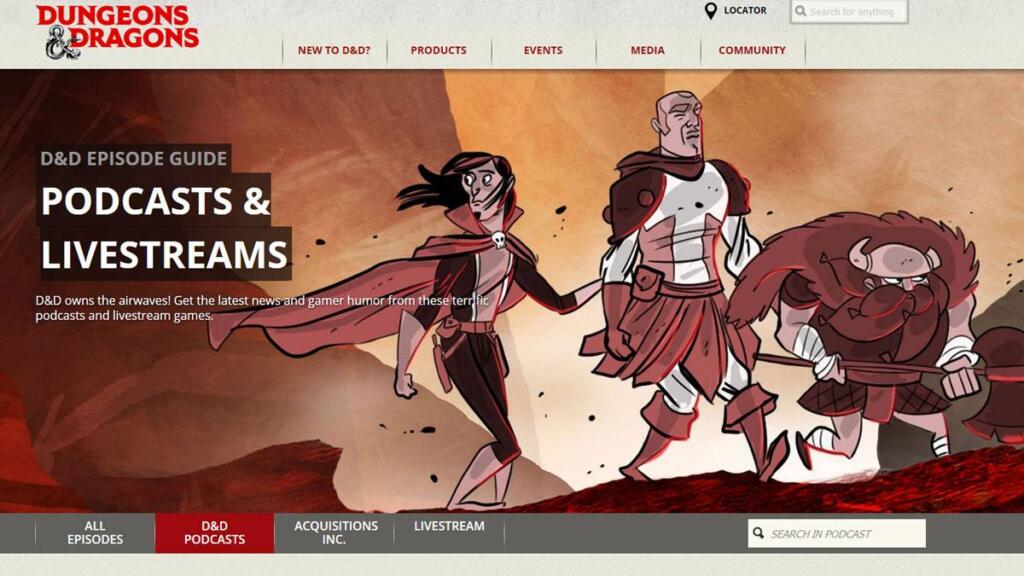 Wizards of the Coast recently split their previous podcast into two different ones: Dragon Talk, focusing on interviews, and Dungeon Delve, specializing in live play sessions. Â I haven’t listened to the latter, but I often like the interviews on Dragon Talk, like a recent one with Mike Selinker about the upcoming Betrayal at House on the Hill: Widow’s Walk expansion [10]. Of course, the subject matter is usually related to games by Wizards, but that works for me when I want to learn about, say, the new Curse of Strahd book.

The Signal is distinctive for being both the shortest podcast on this listÂ as well as the only one that is presented “in-universe”–the idea is that the episodes are messages transmitted from an inhabitant of Numenera’s Ninth World. Each transmission talks about something weird going on in a different part of the world, providing adventure hooks that are dripping with Ninth World atmosphere. It’s a really fun format and great for sparking adventure ideas for a Numenera game, or a different game if it’s sufficiently weird.

This one is a good source for information and inspiration related to Lovecraftian gaming. In addition to covering Call of Cthulhu, MU discusses Mythos-related art, fiction, Kickstarter projects, and other board and card games (like Cthulhu Wars). The two things I like best about this podcast are its timely supply of Mythos news and its thorough discussions of Lovecraftian RPG topics, such as how to use (and abuse) the players’ NPC contacts. You’ll find some nice, evil ideas here.Â Go Pods!

This podcast is basically a book club focusing on the works that defined fantasy roleplaying (the Appendix N mentioned previously). The hosts start off by discussing an inspirational work of literature, then follow up by giving ideas for how this piece of fiction can inspire (or has inspired) an RPG adventure. Sanctum Secorum is strongly focused on the Dungeon Crawl Classics RPG (indeed, co-host Jen Brinkman is also one of the Spellburn crew), but there’s plenty of good stuff here even if you don’t play DCC.
That’s it for my list. What about you? What’s your favorite gaming podcast, and where do you listen to it?
Keith Garrett is a freelance writer from Memphis. He’s been a roleplayer for 30 years, and firmly believes you can never have too many dice. He writes more things like this at adventuresofkeithgarrett.com, [14] and on Twitter he’s @keithagarrett [15].
28 Comments (Open | Close)

28 Comments To "A Sampling of RPG Podcasts"

So, no love for the SAVE Or DIE podcast?

Hi, Michael. Thanks for mentioning Save or Die. I’d heard of it from Jim Wampler, since he’s one of the hosts and he mentioned it from time to time on Spellburn. But I haven’t listened to it myself.

Jim is AWESOME, as are the rest of the cast. It’s a great podcast!

There are a couple of Stew Adjacent podcasts that deserve mention.

Anything from [1] is worth a listen, and will let you hear Gnomes Chris, Phil, Senda, and the occasional comment by Editor Bob. They’ve got several shows in their network and all are worth a listen.

Senda is also one of the mad geniuses behind She’s a Super Geek ( [2]) a live-play podcast. I’m still getting caught up on these, but I highly recommend the Headspace episodes. Bombshell was the best of us…

Hi, Angela. I’ve been listening to the “Stew Adjacent” since John here told me about them (after I’d written the above). I like them too! Headspace sounds great, so I’ll have to listen to those episodes as well.

Talking Tabletop is one I’ve just started also, and I’ll try out Gaming and BS. Thanks!

I would also suggest the RPG Academy & Shark Bone podcast.

Thanks, Gene. Michael at RPG Academy tweeted me about his podcast, and I’m checking it out. I’ll add Shark Bone to my listen-list too!

Also have to toot my own horn here: Technical Difficulties Gaming Podcast ( [18]) – we got together as a group off of the RPPR forums in order to play test the recently successfully Kickstarted system Red Markets and decided we liked playing together enough to keep playing.

Hi, Laura. I also just found RPPR, when I was looking for more info on Red Markets last week. I’ll definitely be listening to more of them.

And I’ll check out Technical Difficulties! Thanks. 🙂

Here’s another vote for RPPR and technical difficulties. I’m a fan and regular listener of both!

I’d toss in Knights of the Night (KOTN), Sneak Attack! (which somehow manages to be curse-free and wildly entertaining), a second for RPG academy, anything by the One Shot crew and my own show I’m rather proud of, Godsfall.

Thanks, Aram. I’ll try those out too. Looking forward to hearing Godsfall.

I’ll second Gaming and BS as a well done and informative podcast.

The other main one I would add to the list would be:

Thanks, Tom! That sounds appealing.

Another great podcast, that is specifically for Game masters, check out the Dungeon Master’s Block.

Cool, Reduku. Thanks for the recommendation!

Just to add my thoughts I really like The Formal Gamer, three guys who just have a lot of fun. Big fan of Critical Roll too, but that’s not strictly podcast. We’ve started broadcasting our own called [19] Early days so any feedback would be great.

The Gauntlet has a great set of podcasts, but I’m biased. The Gauntlet Podcast generally talks about games and play;. Discern Realities covers Dungeon World; +1 Forward is dedicated to PbtA games; Fear of a Black Dragon does OSR; and Pocket Sized Play offers edited AP sessions from campaigns. The Gauntlet network has a large online play community of open games (many posted weekly online on YouTube).
[20]

Thanks, Lowell. Those sound great!

Y’all should check out the DnD 5E Podcast the Legion of Renob at [21], it comes closest to what it’s like to be chilling with friends at a table IMO