A Noob’s Guide to MMOs 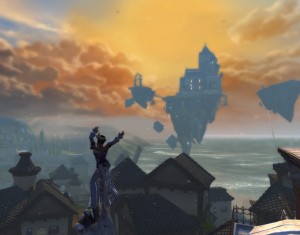 Neverwinter can sure be pretty.

I’ve been playing Neverwinter for close to four months now and I’m still enjoying it as much as I did in the beginning, if not more so. Part of that is the whole joining a guild thing. If you remember, back when I first wrote about the game, I mentioned that I had been a bit of an ‘Evercrack’ addict. Recently, I’ve come to realize that the game itself is only a part of the reason I get addicted to games. Equal blame must be laid at the feet of the people I play with. I’m distracted by shiny objects. People can TOTALLY be shiny objects.

(Consider me giving the side eye right now to the members of Hollow Omen, Silent Redemption, the players of Aether MU*, and all of the Simming Boxians, and now those darn Soldiers of Defiance…)

When I first started playing the game, I did a little bit of research on how the game worked, but for the most part, I just played. It wasn’t until I joined a guild and started exploring some of the end-game content with people who (mostly) knew what they were doing that I began paying attention to how to actually play the game well. Very quickly I began to notice some common ‘noob’ mistakes that people make when they start playing an MMO. By the time I was comfortable with my guildmates and playing both of my characters confidently (yeah, I made a Control Wizard too), I started wanting to give advice to all the noobs I was seeing. Even if I don’t have kids, I sometimes have a tiny bit of mothering instinct.

The advice below is intended to be generic enough that it can be useful in pretty much any online game community. While I only have extensive experience with Everquest and Neverwinter, I’ve talked to numerous gamers and there are some commonalities to most of the MMOs we play.

You’re playing a game with other people. Some of them might be awesome. 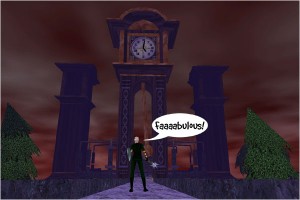 A captioned screencap from back in the days of EQ. I used to do Silent Redemption’s news updates.

There were some articles at the end of 2013 reporting that subscriptions to World of Warcraft were down to 7.7 million. Even with a loss of players, that’s still a lot of people. Neverwinter, a ‘small and free’ game that is flying somewhat low on the radar of the game community, has an estimated 2 million unique players. Even if those millions aren’t all actively playing the game on a weekly basis, no matter what time zone you’re in, or what whackass work schedule you have, there are plenty of people playing these games. There’s no excuse to not find people to play with that also make you happy.

I’m always a little confused when I get random guild invites from strangers or when I see people shouting out in public chat that they need a guild invite, any guild will do. I’ve seen this happen in both EverQuest and Neverwinter, two games separated by a decade. Your time is precious, so make the effort to find people to play with that you actually like. It’s been said for pen and paper games that you should never game regularly with someone you wouldn’t be willing to invite over for dinner. I think for MMOs, the attitude should be something similar. If you’re not willing to consider meeting an online player face-to-face, why would you consider spending so much of your free time with them?

For me, the key is finding people who know how to laugh and have fun, but also know how to respect one another. They should go out of their way to help one another, even when there’s no personal gain. And, most importantly, they do a good job of finding the balance between being a casual but skilled players.

You’re playing a game with other people. Some of them might be jerks.

This is the internet, so it’s important to remember that not everyone is going to be awesome. The anonymity provided by hiding behind a monitor brings out the worst in some people, no matter what online community you’re part of. With as many people are playing these games as there are, there are going to be occasional asshats. Whether they’re deliberately being jerks by trying to ruin another player’s experience, or being a bully by lording their superiority over someone else’s inexperience, you’re going to meet someone you want to punch in the face eventually.

The trick with unpleasant people online is to not take their vitriol personally and to never sink to their level. They’re not worth your time and there are plenty of people who are actually worth playing with. Use the in-game methods to report the truly egregious infractions so the admins of the game can deal with them, but otherwise just move on.

The group shot after killing Xegony, big ass fairy goddess of air, for the first time.

Don’t be afraid to make mistakes.

Playing a game is a learning experience, so you are going to make mistakes while learning how to play the game well no matter what you do. Sure, you can do research on the game and be better prepared than some, and there are people who have a natural talent for video games, but pretty much everyone has to deal with a mistake here or there as they adapt to how the game works. It’s absolutely nothing to be ashamed of.

Refer to the previous section if you run into anyone who belittles you for not knowing how to play the game perfectly. Find the people that are willing to help you get better and not use your mistakes to make fun of you. I completely butchered my rogue’s build in Neverwinter and it became quickly apparent that I was seriously underperforming compared to other rogues. I was pretty embarrassed by it, but my guildmates were understanding about the mistakes and helped walk me through rebuilding the character. My damage output doubled almost immediately.

Speaking of rebuilding, a great thing about most modern MMOs is that it’s pretty easy to fix mistakes made while leveling up a character. In an informal poll of my gaming friends, I haven’t heard of a currently active game that doesn’t allow for redoing the powers and abilities of a character. EverQuest didn’t have the option back in the day, but that game was far more dependent upon the gear you had than the points you spent on your character. In Neverwinter, it costs 300 zen (the equivalent of $3) to rebuild your character. The base stats cannot be changed, but every other choice you made from 1 to 60 can be redone. 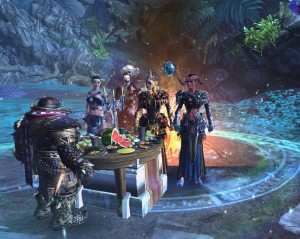 Here’s Feast…. and Ants glaring at everything.

Don’t be afraid to ask questions.

Going hand-in-hand with being willingness to make mistakes is the willingness to ask questions. I see too many people trying to muddle through without knowing what’s going on out of fear of seeming like a noob. Don’t be afraid to own your noob-ness. It’s far better to admit you’re not sure about something, especially when grouping with other people. If they’re decent and cool people, they’ll offer explanations and advice. If they’re dicks, you don’t want to play with them anyway.

This goes for how best to tackle an encounter or even how to use certain abilities. One of the reasons I have fallen in love with Neverwinter is that the game play is far more than just button mashing (unlike how I initially thought). While the system isn’t hard, there is a definite degree of skill involved in getting really good with playing the different classes. Knowing how to combine the powers and abilities to best effect can be incredibly rewarding, but certain choices might not be intuitive when you first play. If you see someone of the same class doing massively more damage than you, talk to them and find out what they’re doing differently. It might be enlightening and help you improve your own game.

Play the game you want to play.

That said, don’t feel pressured to play your character in exactly the same way that everyone else is playing that class. You’re the one putting your free time and effort into the game, so you should make sure you’re playing it in a way you enjoy. Despite the way some players act, there is no one right way to play the game. Ultimately, it’s your time and your game experience, so you should play the game the way you want. 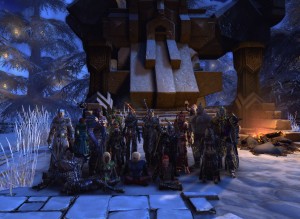 Group shot from Neverwinter’s ‘Winter Event’ this past January.

There is one caveat to this, though. Understand that while you are well within your rights to play the game in whatever way you please, other players may have expectations on what your class is going to bring to a group or a raid. If you’re trying to do harder, end-game content, you should have a certain level of understanding of the role you’re expected to fill. If you’re playing a tank but can’t keep agro from the boss, or you’re playing a cleric that didn’t specialize in healing, the other players in your group might be a little unhappy.

Absolutely do it the way you want to do it, but have an understanding of others’ expectations.

Be kind to the noobs coming up behind you.

Finally, my last piece of advice is to pay a little kindness forward and be nice to the noobs coming up the leveling ladder behind you. Maybe you were a little smarter about playing the game out of the gate, but ultimately everyone has to start somewhere. You never know who you’re dealing with on the other side of the screen. They could be young, they could be technologically challenged, they could be English as a second language speakers, they could have health issues, or they could just be really enthusiastic and not realize they’re doing something a little dumb. A little patience can go a long way in turning a clueless noob into a solid player.

So is there anything I missed? What do you think are the most important pieces of advice you can give someone playing a new MMO for the first time?

NOTE: Thanks to Misha for the Neverwinter screenshots.

1 Response to A Noob’s Guide to MMOs