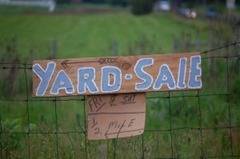 For the past six years, every January I’ve run a garage sale article. I’m loathe to give up a six year tradition, but response has been hit or miss and, to be honest, it’s gotten harder and harder to scrape a handful of campaigns out of my notebook for the article. So this year we’re trying a new twist: a set of items that your characters might find at a garage sale (or as loot or that might be brought to them by someone else who finds them) each with an adventure hook inside. I’ve included one item for each of the big three genres, though they can all be re-skinned to fit pretty much any campaign, and included a mundane and a magical or alien version.

Cruel Bracers (mundane): In a box of scrap metal, broken weapons, and misc bits is a set of wicked looking shackles. They look fairly new but have seen some use. The chain and the cuffs are clearly constructed by different smiths, and the chain has a maker’s mark on it. With some investigation the PCs can find what these things were used for. Is there a band of slavers operating nearby? Were they used to bind some fell beast or a madman?

Cruel Bracers (magic): The bracers have a beneficial enchantment (allowing greater feats of strength at the expense of fatigue, or protecting against a certain kind of energy) but are also cursed to make themselves difficult to remove and the wearer weak willed and subservient. It might be possible to remove only the undesirable effect but it will require a skilled sage or some clever research and a few difficult to attain items.

Puzzle Box Picture Frame (mundane): Contained within an intricate and valuable looking picture frame is a crappy painting of a sailing ship. It would be worth much more if the poor quality art was replaced with something good, but the frame is some sort of complicated puzzle box affair that will take some time to open without breaking it. Once open, a map to pirate treasure is discovered behind the picture. Time for a treasure hunt!

Puzzle Box Picture Frame (magic): Possessing the picture causes strange nightmares of sailing a ship through a maze of massive basalt monoliths that shift and slide in the ocean. On the one hand this slowly grants a cumulative bonus to opening the almost impossibly hard puzzle box. On the other, as the nightmares progress, victims wake with more and more paint flecks on their skin and ghostly figures in the painting become clearer each night. Hopefully the frame can be opened and some remedy for the curse can be found in the pirate treasure before it’s too late.

Jack in the box (mundane): Aunt Trudy has been senile and unable to care for herself for a number of years, so when Uncle Jack passed away, the family moved her in with a relative and started cleaning out their house. After weeks of sorting, cleaning and discarding a large trunk in the attic divulged a bizarre secret: the long dead desiccated body of the same Uncle Jack who was just interred in the local cemetery. Who is in the chest? Who is buried in the family plot? How does one end up with the body of a full grown man in a chest in one’s attic?Â  Trudy’s the logical source, but she’s not talking.

Jack in the box (magic): It’s a smaller box because it doesn’t have to hold as much. Some of Jack is still in there, but his limbs have been removed and his long bones carved into a set of strange rune etched pipes. In his breast pocket is yellowed sheet music in rust colored ink, but does anyone dare?

The Librarian’s Lost Love Letters (mundane): In the margins of an old library book, a set of love letters between a pair of library patrons is written in cramped script. It’s not a large book, so the letters start and end abruptly, implying other books in the series. It will be no small task to track down the rest of the books and their owners, with seemingly little payoff aside from some good karma, but then there are hints that maybe there’s more here than a pair of teenagers defacing library property. Maybe it is worth the trouble.

The Librarian’s Lost Love Letters (magic): There’s something odd about the love letters. One of the lovers sprinkles their writing with odd words and ideograms and the other seems less consistent in writing style, vocabulary and voice than they should. Maybe tracking down the whole series will reveal some witchcraft that can be used or purged and perhaps there is a victim that could still use help.

One Distress Beacon, slightly used (mundane): Maybe a used distress beacon isn’t the best idea, but it was cheap and it works more or less fine. You can be certain because it still has the last owner’s distress call recorded on it, though apparently it’s never been accessed. Is it worth checking out at this point? What will you find?

One Distress Beacon, slightly used (alien): No one has disturbed this thing in ages and it’s clearly alien tech of some sort. While there’s no way to tell what the distress call is or where to find the original owner, that’s not a problem because it has the ability to teleport you there without even needing your consent.

Zoo in a Box (mundane): An interesting oddity that would make a nice gift for a child, the Zoo in a Box is a medium sized box that holds a collection of fist sized globes that project life like holograms of various creatures in zoo displays. But one of the globes projects a different hologram, a crazed man locked in a small zoo cage, raging at someone off hologram. What is this doing in the set? Surely that man needs help. Investigation can find the location of the physical zoo where the holograms were taken but the owners claim ignorance of the whole matter.

Zoo in a Box (Alien): The holograms are remarkably life like. They can even be touched and the person in the cage looks more confused and disoriented than crazed. They also look remarkably like the character who’s player couldn’t make it to the game and who has mysteriously disappeared. Finding the zoo doesn’t help though. Research of old records indicate the animals (and the character) aren’t really holograms. Instead they’re kept in suspended animation in a pocket dimension tended to by robotic drones, but they’re not sure how to access the dimension, nor are they sure how someone could get sucked in or if it’s some sort of glitch or a trap. That’s your problem.