A Look at Titansgrave 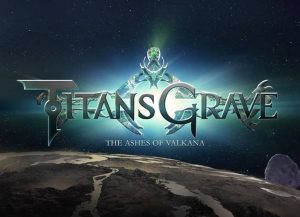 Two years ago, I asked Wil Wheaton a question. Titansgrave: The Ashes of Valkana was the answer.

Okay, that’s a little more dramatic sounding than it actually was. On the last day of GenCon in 2013, I attended a TableTop Q&A hosted by Wheaton, the show’s personality, and Boyan Radakovich, the show’s producer. Even though TableTop was a huge hit (it was even presented with the Diana Jones Award that year), because it was a Sunday, there was a small enough crowd that it felt more like a hangout between a few friends. Anyone who wanted to ask a question pretty much got the chance.

When my turn to ask a question arrived, I asked about the lack of RPGs in the schedule for season two of TableTop. Though the show focuses on board games, my favorite episodes from the first season were the Fiasco and Dragon Age episodes. Wheaton said he was glad I asked that particular question and proceeded to swear the audience to secrecy. He excitedly announced that they were in the very, VERY early stages of planning an RPG spin-off show. There were no specifics to share at that time, but he wanted us to know that he had definitely not forgotten about RPGs. As you can imagine, I was more than a little psyched about this news.

Fast forward to Spring of 2014. TableTop announced a crowd funding campaign to finance a third season. There were other stretch goals beyond the bare minimum needed for the third season, but the super-secret RPG show was tacked on as the ultimate stretch goal. If they somehow reached $1 million, they would make the show. By the time the incredibly successful campaign was done, they had raised over $1.4 million. The RPG show was a go, but it would still be another year before we began to hear anything concrete about it.

At the beginning of April this year, the name of the show was finally announced as Titansgrave: The Ashes of Valkana. At first, the only information we received was that it would use the unreleased Fantasy AGE system from Green Ronin and would be a mix of science fiction and fantasy, similar to Thundarr the Barbarian from the early 80’s. By mid-May the cast of players was revealed to be Hank Green (DFTBA!), Laura Bailey, Yuri Lowenthal, and Alison Haislip. In Early June, the first episodes were released, and just after GenCon, the tenth and last episode was aired. Now it’s all available on YouTube. 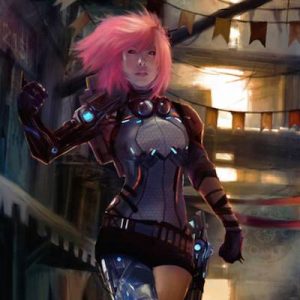 Overall, I highly enjoyed all ten (plus a prologue) episodes of the show. On a pure entertainment level, the story Wheaton and his players told drew me in, keeping me invested and eagerly looking forward to each episode as they were released. Just as TableTop is a good way to show people what board games are all about, Titansgrave could serve equally well in explaining to non-gamers what RPGs are all about. This rings true for so many things, from the way the players get immersed in the story, how they interact with each other, and all the way to how the dice can be perversely fickle in how they roll. Then there are the in-jokes that so easily spring up in gaming groups that are comfortable with one another. This time, though, we get to share in those jokes. There’s a reason people were already wearing ‘Five gold and a party!’ t-shirts at GenCon.

Interestingly, my one minor quibble with the show actually falls into the realm of GMing, that thing we tend to focus on here at the Stew. The show is great for showing what it’s like to play in a game, but doesn’t necessarily provide a good guidebook for new GMs on how to run a game. Wheaton, as the GM, keeps his decisions fairly close to the vest, making it difficult to see where his skill at running the game is actually coming into play. There were also a couple of occasions where it felt like the players were being told their characters’ reactions rather than being given the opportunity to react. To be fair, this probably comes from the editing needs of creating a cohesive story and editing a several hours of play time down to an entertaining, hour long show. 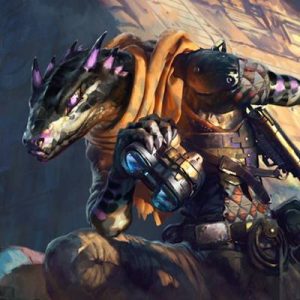 Aankia. All of the art done for the show and book is gorgeous.

The real treasure trove of GM inspiration is probably in the related books Green Ronin released at GenCon this year. Not only did they release their Fantasy AGE rulebook, but they also released the Titansgrave adventure series book. The second one is not a setting book, unfortunately, but it does detail everything the PCs did in the show. An all-star cast of game designers and writers contributed to the show, with many taking turns writing the adventures that drove the show. These authors include Chris Pramas, Will Hindmarch, Keith Baker, Nicole Lindroos, Leonard Balsera, and more. The interesting thing is that each adventure is presented in the book as it was written, not necessarily as it was played on the show. Right there that provides some insight into the things that the GM had to adjust or adapt for his players.

Since I actually had a little extra cash at GenCon this year, I was able to pick up both books. I am definitely a fan of the show, so I was curious about them, but I also thought it would make good review fodder. How well does the book prepare you to run a Fantasy AGE game set in Valkana? It was important to discuss the show itself first, because whatever the book has to offer, it will be difficult to divorce it from the show. So, part two will come after I’ve had a chance to dig into the books and formulate some thoughts on them.

In the mean time, have you had a chance to watch Titansgrave? Pick up the books? What did you think?

9 Responses to A Look at Titansgrave