In case you hadn’t heard, Apple released another life-changing device this weekend, the near-mythical iPad. There exist any number of reviews that can answer your general questions as to whether the iPad has a place in your life, but fortunately for you our crack team of gnome engineers have been putting the device through its paces and show how the iPad might change the way you run your role-playing games!

At its essence the iPad is, unashamedly, a giant iPod touch. Or, perhaps more accurately, a giant iPhone without the phone or camera component. For anyone who’s used an iPhone you already have a good understanding of what the iPad is capable of. The larger, 9.7” diagonal screen does make all the difference and opens the device up to deeper, more content-driven applications.

The iPad’s quick pitch is that of a media consumption device. You can create on it, by using the virtual keyboard or via the very pleasant touch interface, but most of your usage will be by flicking or scrolling your way through content. Once you become accustomed to the UI which melts into the background, this consumption becomes almost surreally pleasant.

We already have laptops and netbooks aplenty at our gaming tables. What does the iPad do that’s different? For nearly every example we’ll be providing you can certainly parrot back “my laptop/netbook does that.” It’s true, the functionality isn’t necessarily unique. It’s the ease of use and form factor that the iPad really nails. And, without question, because of its closed nature, the iPad is one of the fastest and most stable devices you’ll use. 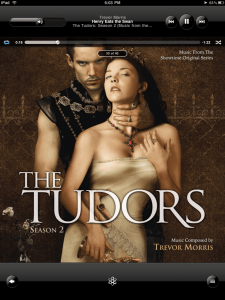 Out the gate the iPad has one huge limitation: lack of multitasking. From a gaming usage scenario (with some notable exceptions), you’ll be using the iPad for one task at a time. This may be addressed in a future OS update, as rumored, but for now only Apple’s internal applications can work in the background.

Of them is the iPod application. Once you load content on the iPad (you currently cannot stream from your home iTunes library) you essentially have a very large iPod. While in other applications the iPod will continue to play. You can configure the Home button–just like on an iPhone/iPod Touch–to bring up the playback controls on a double-press. Connect to speakers to play your campaign background music.

The iPad has an iBooks (iTunes link) application, available through the iTunes Store at no charge. This is the virtual bookshelf you’ve seen in the ads where you can purchase and download books from the virtual bookstore. The iBooks application uses the ePub format. You can load (“sideload”) your own books into the iPad; the iBooks content isn’t entirely locked off.

Usage and reading is very pleasant. Compared to an e-ink reader, the iPad’s display is larger (or the same if you’re coming from a Kindle DX), substantially faster, and full color. All the usual suspects are there: the ability to change fonts, size, and rotating the iPad shows you either facing or single page views. How does it read? Well, my Nook will probably go on eBay this week. Sure, the iPad doesn’t have battery life measured in weeks like the Kindle, but the reading experience is considerably more pleasant.

However ePub really is of limited use; what you want to know is PDF support because 99% of the digital RPG content is published that way. Apple’s OS X has always had great internal support for PDF natively and the iPad is no exception. The frustrating manner is that the closed nature of the iPad makes getting to your PDF content more difficult than it needs to be.

The iBooks application does not read PDFs. Opening a PDF via, say, the email application will give you very basic functionality. For anything else you’ll need to get a 3rd party application that fully supports PDF.

The iTunes Store has a library of over 180,000 applications, of which, at the time of this writing, some 3,000 are specifically for the iPad. While the iPad will run most iPhone applications (either 1:1 scale or at x2, “enlarged”), many don’t feel right on the iPad or support the expanded real estate. The native iPad apps really feel more appropriate.

The aforementioned iBooks app is a free download from the Store. Many others are also free but quite a few are for-pay. Since the iPad app ecosystem is in its infancy, prices are in a heavy degree of flux. Keep an eye on AppShopper to track pricing trends and alerts on your favorite apps.

Speaking of which, I’ll share a few with you.

The GoodReader (iTunes link) application is, currently, a $0.99 purchase. It’s a robust application that allows you to sideload documents–in this case PDFs–from iTunes. You can also download content into GoodReader from the web, sync into your Google Docs account, or even Dropbox. It has a nice interface to navigate your PDF library. Of all the PDF applications I tried, GoodReader was the best at the $1-or-less (free) price point. Hey, gnomes don’t have deep bank accounts! 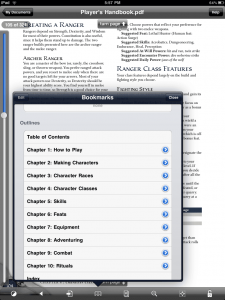 GoodReader’s performance? Excellent. You can single finger swipe up or down from page to page in your PDF, full support of internal bookmarks, pinch and zoom, all lightening quick. Where PDF rendering on a Nook or Kindle is measured in seconds (painfully slow), the iPad renders near-instantly. PDFs retain all of their formatting and with embedded fonts, you can zoom in as close as you need without any loss of detail (graphics not withstanding).

For my D&D game–where I prep everything electronically–I exported my campaign notes and encounters for the evening into a single PDF and loaded onto the iPad. From a player perspective one could easily print their character sheet from the Wizards of the Coast Character Builder into PDF and load all their characters. With a simple swipe have access to all your characters at your fingertips.

PDF handouts are, obviously, a big deal on the iPad. Queue them up and pass the iPad around. Do I even need to mention the potential application within a Star Trek game? *feints*

So you obviously can’t run the D&D Character Builder on the iPad…or can you? Well, you can actually, with some caveats.

If you have a desktop running the application (or even a Mac running a virtual machine of Windows with Character Builder running) you can use a Microsoft Remote Desktop (RDP) or VNC to connect to a Windows or Mac/Linux machine, respectively.

Essentially you’re running Character Builder–or any application–on the host machine and using your iPad as a window into that other machine, controlling remotely. Now your iPad can run essentially any program you already own. Performance will become gradually worse the more graphically-intensive your host application is.

There are a few options, but Desktop Connect (iTunes link) is the early frontrunner. Navigation of mimicking a mouse via a touch interface takes some getting used to and the price, $11.99 currently, might put a few people off. But if you think outside the box you can VNC to a remote machine and do pretty much anything.

Here’s another outside-the-box way of using the iPad. How about using it as a virtual window into your existing gaming laptop? A clever app with a clever name is iDisplay. The concept is fairly simple: run a client application on your Mac (sorry Windows owners) and extend your desktop display onto the iDisaply iPad app. Thus the iPad becomes a virtual display off of your host machine. What to display a map on the iPad? Drag it onto the virtual display and pass the iPad around the table. Have a graphical handout to share with a player, drag the output into the display area. Need to, literally, show someone a website? Well, you get the idea.

Only caveat is that iDisplay isn’t fully baked; it’s buggy as heck and at $4.99, a little pricy to be a beta tester.

If you’re familiar with OS X and Apple products there’s a good chance you’ve used their flagship presentation software, Keynote. There is an iPad version (iTunes link) as well, with many of the features one is accustomed to. Going back to my own D&D game, I use Keynote to display a graphical initiative tracker onto a mounted LCD television. (Gnome Geek Factor Five!) For any visual aids, using Keynote on the iPad gives you another vector to display high quality content, either to pass around or output via the VGA connector. Yes, the iPad can output its video signal. In this mode Keynote displays your presentation on the external display and the iPad becomes a secondary, speaker presenter. Not quite as useful, I’ll grant you.

I’d be remiss if I didn’t mention the ability to use the iPad as a die roller. Any virtual polyhedron you can imagine. Sure, plenty of websites do this too but with your iPad you can, literally, shake the iPad to make it roll your dice.

Right now there’s nothing native for the iPad, but there are some notable iPhone/iPod Touch applications that do this; hopefully they’ll see some iPad versions soon. There’s Dice 3D, The Dicenomicon (awesome name!), and Dice Roller to name a few. I imagine you’ll be able to literally flick the dice on the virtual tabletop for your roll.

Oh, we’re not done yet, not by a long shot! Coming up in Part Two we’ll spend some more time on specific use case scenarios as well as some “what if” options of how the iPad could be used at your gaming table.

We’re also soliciting any questions for our final video walkthrough that will demonstrate many of the items discussed. Please pose your questions in the comments below! The gnomes slave away so you don’t have to!