A Con From the Organizer’s Side

This weekend, we organized and threw our first minicon. It was immensely easier than running a “real” con in many ways–but it also telegraphed some of what goes into planning and executing a con of whatever size. If you’re looking at organizing a house con, or want to see what goes on behind the scenes, read on!

I was inspired by an Endgame mini-con that I’d been fortunate enough to attend. It was a great day of gaming, and I really wanted to try out a local version of the same thing. 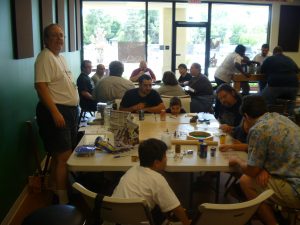 While we had discussed the idea of mini-cons before the Squirrel ever opened, we didn’t think seriously about planning a mini-con until after our first Used Game Swap, back in February. Among the things we learned from the game swap was that an auction room or used game sale space takes too much time, space, and attention to do alongside a mini-con. The two do go great together, but that’s definitely full fledged con territory.

During March, I mentioned our plans for the mini-con in passing to several of our regular GMs and players, both at Encounters nights, at the RPG meetup, and in passing to other people who mentioned GMing. During this time Jennifer and I decided that I would take the lead on the mini-con; she would share ideas, but I was responsible for making final decisions. 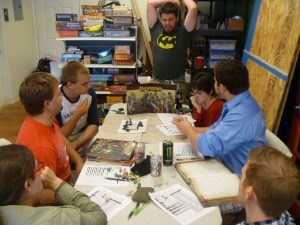 By early April we had finalized our date, deciding to pair it with Free RPG Day on June 18th. I had some soft commitments from a few people, but I knew that I wanted a lot of games–three slots times six or seven tables during each slot. I also wanted many GMs, so everyone could enjoy playing in games too. I threw together a quick game session form, publicized it through previously established channels, and got some game submissions almost immediately. Eleven games were submitted during the first ten days, followed by a lull, then a rush when I told people that I was going to post the game signups soon.

Early in the process, we had discussed a nominal fee to play in the mini-con–something like $3 per session. By the time we got around to signups, I had forgotten that there was a financial part to the plan, so signups were amazingly easy. I suspect that requiring payment at the same time as game submission would increase the workload for the signing up stage dramatically.

My “trick” was to test the system with our GMs first, opening registration to them early as a reward for running games. Unfortunately, my trick didn’t work out–I didn’t get early signups from the GMs! I wondered if the system was losing their signup emails, but my tests all worked fine. Once I opened registration to players, everything submitted smoothly–our GMs were just being polite and didn’t seize everything the first moment they were allowed.

When players completed the signup form, it sent us an email of their picks. I copied the names into a google doc with the game names and capacities listed. If there was still space for them in the games they selected, I sent them an email telling them that they had a seat at the table. If we were charging for the slots, for simplicity I would have submitted a bill at the same time– “You have reserved three slots; that will cost $9. You can pay in advance or on the day of the convention.”

That was the next month–I just checked emails from the form, wrote back with a “you’ve reserved a seat” or “bummer, all the seats at the table are taken… do you want to try another game in that time slot?”, and updated my doc to ensure that I didn’t assign eight people to a 6 person table. 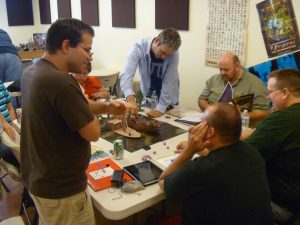 Finally, the day of the con came. We got there early and setup the tables to maximize play space– and to separate the tables as much as possible to make it (slightly) easier to hear your GM. One table was set aside for GMs to store their bags, sort minis, and grab free donuts.

Several players and GMs showed up early–excited by both the Minicon and Free RPG Day spoils. Fifteen minutes before the first session we opened the doors and let people peruse their picks, showing GMs the tables we had set aside for them. (Fifteen minutes may not have been enough time if we had to collect payment and issue tickets, though RPG Day picks are an obstacle that most cons don’t have to address.)

The GMs were all present before their slot, as were almost all of the players, even for the first morning slot! Game masters set their screens and books on their tables, we directed traffic so players could find their games, and the rush of people was over by 10:15. The first slot was in session!

Refreshments proved popular, exposing some deficiencies in our stock levels for the con. I grabbed breakfast for “con staff”, and hit the store to get more snacks and drinks. About a half-hour before the end of the slot we made a time announcement and were amazed that the tables (mostly) ended on time. Most people grabbed nearby food and were back in time for the afternoon session.

The afternoon session was larger, with seven games instead of four. Space and volume control were more challenging and there was a scramble when we realized that we were down one GM. He had been called into work– fortunately, his players were able to be join other games as they were still setting up. The session chugged along smoothly, with GMs handling their games well. A few ended sooner and others pushed into the dinner break, but everyone seemed happy.

The evening session followed the same pattern– in fact, it was running so smoothly that I got a chance to play in “We Be Goblins”. It was a hoot. Fear Poog, the mighty cleric! It was a great finish to a surprisingly easy day. 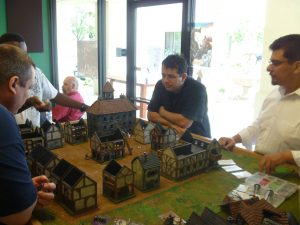 It was a great event! We learned a lot, but it honestly ran more smoothly than it had any right to. Here are a few takeaways:

We honestly couldn’t fit many more games or gamers into the room–leveling up would require a larger space, financial considerations like renting space, losing drink and snack income to the hotel/convention center, and other tricky tradeoffs.

This was our first attempt and it proved successful, so we’re looking at repeating it down the road. What have you encountered as a con organizer? I’ve heard stories about house cons growing into traditional conventions–how did you make the transition? If you’ve worked behind the scenes at a con, share your stories and tips. How do you make a con thrive? If you have any questions about running a con, ask away in comments!

12 Responses to A Con From the Organizer’s Side